To sell or not to sell? Owner weighs up offering Magna Grecia's dam

Cabaret is catalogued in the Tattersalls December Mares Sale 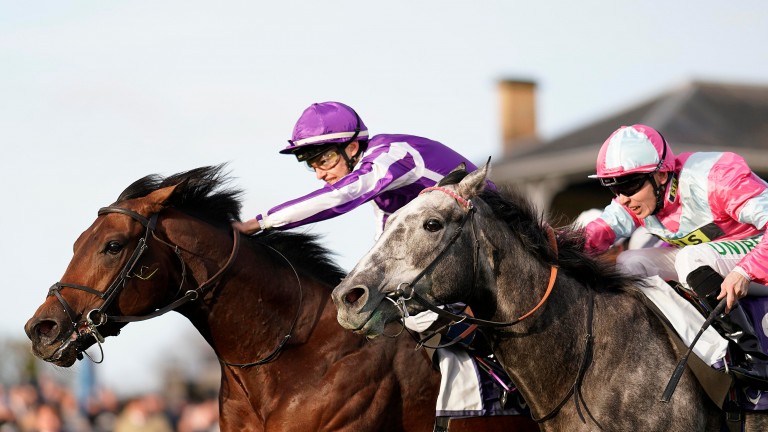 Magna Grecia gets his head in front at Doncaster to give Bob Scarborough a tough decision to make
Alan Crowhurst
1 of 1
By Mark Scully UPDATED 6:50PM, OCT 27 2018

As problems go, it is a nice one to have.

Following the victory of Invincible Spirit colt Magna Grecia in Saturday's Group 1 Vertem Futurity Trophy at Doncaster, owner Bob Scarborough must now decide whether to cash in and sell the dam, Cabaret, at the Tattersalls December Mares Sale or withdraw her from the catalogue and continue to breed from her.

The Australian-based Scarborough, whose Wood Nook Farm bred Magna Grecia, was awake in the middle of the night to learn of the horse's victory but will take time to consider his options before making a decision.

The mare is due to be offered by Norelands but the stud's Harry McCalmont is hoping he will not have to do so, such would be the excitement at the opportunity to breed from a now proven Group 1 producer.

"I think he's got to sleep on this decision but I hope he will maybe pull her and keep breeding from her now that she's bred a Group 1 winner," said McCalmont.

"It is very hard to find a mare that has bred a Group 1 winner, particularly a two-year-old colt who looks as exciting as he does, but it will be Bob's decision. We won't know for a few days but we'd be very keen to hold on to her and maybe get her back to Invincible Spirit again while we still can.

"It's a lovely problem for Bob to have but you know what this game is like, it brings you up and it crashes you down. At the moment though, it's onwards and upwards."

The win caps a fine few weeks for Scarborough, with Norelands Stud having sold a filly by Le Havre at Book 1 of the Tattersalls October Yearling Sale on his behalf for 850,000gns to Blandford Bloodstock.

Magna Grecia, meanwhile, was sold by Norelands Stud for 340,000gns at the 2016 Tattersalls December Foal Sale to MV Magnier, Peter and Ross Doyle and Mayfair Speculators and McCalmont was quick to pay tribute to all involved in his sale.

"We're delighted for Bob and particularly pleased for all the team here," he said. "He was a beautiful foal, he made a lot of money at the sale and he's turned out to be a very good two-year-old."

The result could scarcely come at a better time for the operation, as they prepare to send as many as 32 foals to the Tattersalls December Foal Sale, while they have a further 11 in the catalogue for the Goffs November Foal Sale.

McCalmont said: "It's a very busy time for us and it's so important to keep producing big winners from the farm because then people keep coming back to you and have confidence to buy from you again."

Cabaret will also be represented at Tattersalls by her daughter Lady In Lights, who is set to be offered at the mare sale by Godolphin.

FIRST PUBLISHED 6:16PM, OCT 27 2018
It's a lovely problem for Bob to have but you know what this game is like, it brings you up and it crashes you down