At The Sales OCALA 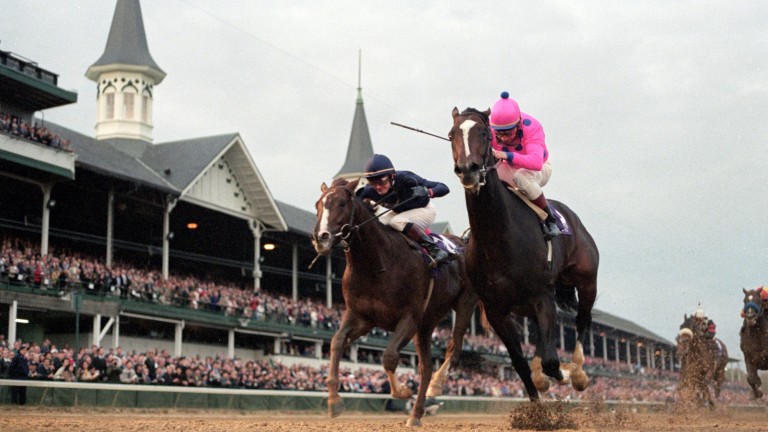 The scene in the sale pavilion at Ocala Breeders' Sales was electric on Thursday, when a Tiznow colt — the buzz horse of the sale — was led into the ring midway through the second session of the spring sale of two-year-olds in training.

After an opening bid of $500,000, competition for the colt - consigned by Bobby Dodd on behalf of Brad Grady - ebbed and flowed up to $2 million, when three different parties went to and fro, in $50,000 increments. Bidding stopped at an OBS record $2.45 million.

Initially there was some confusion about the identity of the winning bidder, as Spendthrift Farm's B. Wayne Hughes, seated inside the pavilion and to the left of the auction stand, was in the mix; and Kerri Radcliffe, bidding from the rear of the pavilion, was also active.

But it turned out that agent John Moynihan, seated in the office of OBS sales director Tod Wojciechowski, secured the colt on behalf of Coolmore's MV Magnier. Moynihan said Coolmore put together a partnership to race the colt.

"Beautiful horse who moved beautiful," Moynihan said. "He's a great big horse. Any horse that can go that fast and looks like that, we've got to take a chance on. It's like I told them, I don't want to have to run against him. He's that good, I think. We just hope he materializes into what I think he can be."

Grady set a reserve he was comfortable with, and lined up partners to race the colt should expectations fall short. Then he enjoyed watching the bidding fireworks.

"We knew he was a really nice horse," Grady said. "Bobby told me he was one of the nicest horses he's saddled. I set a reserve we were comfortable with and we would have raced him. But this is a business and we had to make sense business-wise."

The record-priced colt is a testament to the breeding, racing, and pinhooking programme put together by Grady, Dodd, and their Grand Oaks operation. Grady-owned and -bred Girvin is one of the top prospects for this year's Grade 1 Kentucky Derby and Irap, a successful Dodd pinhook, is being pointed to the Derby for owner Reddam Racing.

Dodd said he had been shown some 300 times leading up to Thursday.

The colt's attraction stemmed from not only being speedy - he turned heads when he breezed an eighth of a mile in :09 3/5, co-fastest time during the pre-sale under tack show—but also his breeding. He is out of the Distorted Humor mare Moonbow and his second dam is multiple stakes winner Storm Beauty, a Storm Cat half sister to champion sprinter Gold Beauty, who has produced Grade 3 winner Buffum, multiple stakes winner and Grade 2-placed Stormy West, and graded stakes-placed Renaissance Lady.

Bred in Kentucky by WinStar Farm, the colt was bought by Grand Oaks for $125,000 from Woodford Thoroughbreds, agent, at the Keeneland September yearling sale.

The buyback percentage was 13 per cent. It was 23 per cent last year. Fifteen horses brought $250,000 or more, compared with 12 at last year’s third session.

OBS sales director Wojciechowski said the Tiznow colt’s purchase price, which exceeded the previous OBS record of $1.9 million paid for a Tapit filly at the 2015 April sale, may have surpassed expectations.

“There was obviously a lot of talk on the grounds about the Tiznow colt, but he probably went beyond the consignors’ expectations and ours as well,” Wojciechowski said. “It was an exciting day, with two million-dollar horses along with that and a lot of horses getting sold, with a 13 per cent RNA rate. That tells us a lot of horses are exchanging hands.”

The sales company executive said the numbers reflect not only strength at the top, but a deep buying bench at all levels, showing the broad acceptance of the April sale by buyers and sellers.

“We have seen this evolution of the April sale, to where consignors are comfortable bringing any type of horse here, and buyers are comfortable buying those type horses and they come here looking for those,” he said. “We have the high-end buyers, (and) we have the mid-range buyers. There is a comfort level knowing stock like that is here.”

Ciaran Dunne, whose Wavertree Stables sold a More Than Ready filly for $1 million to Alessandro Marconi, said the broad-based buying bench was reflected by the fact that some buyers who purchased the day's top individuals were not the typical seven-figure buyers.

“The buyer was new to us (for the More Than Ready filly) and the people who chased her up to $1 million were not the usual people who buy at $1 million,” the Florida horseman said. “That’s the greatest testament to the market—that you can lead one up there scared that you don’t have the biggest buyers on her, and at the end you didn’t need the big players. The players who were there were big enough.”

John Moynihan, agent for M. V. Magnier on the Tiznow colt, was leading buyer with the one purchase.