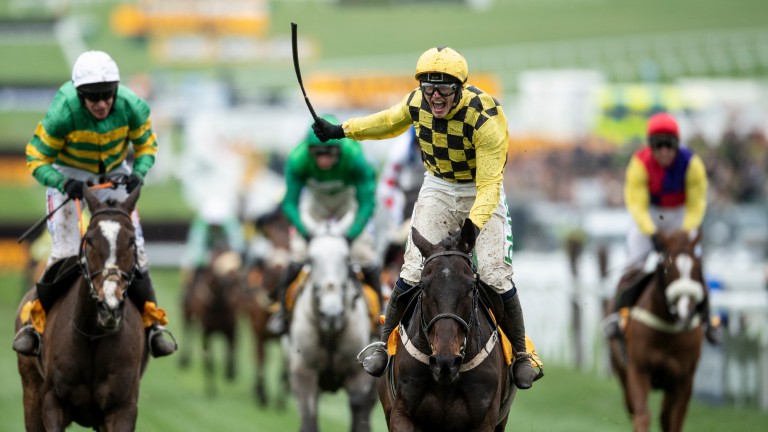 The results of the Cheltenham Festival made generally depressing reading for British breeders, with not a single success in 28 races.

However, our colleagues in Ireland would scarcely have been in raptures either, with a French 1–2–3–5 in the meeting’s principal event, the Gold Cup, and equal numbers of cross-Channel winners from far fewer representatives.

Ollie O’Donoghue pointed out in these pages that one of the reasons for the paucity of British-bred successes was weight of numbers, with jumps foal crops in Britain totalling around 25 per cent of Irish ones and well under half of French crops.

With small sample sizes (only around 60 GB jumps-breds ran at Cheltenham) it is inevitable that statistical blips will occasionally produce exceptionally good or bad outcomes.

One such generated two British-bred Gold Cup winners in three years, Coneygree and Sizing John, for which I for one am grateful. A rather less favourable blip produced no British-bred winners this year.

More significant is the situation highlighted by Martin Stevens of the much better performance of French-breds against both Irish and British produce. A total of 14 French-bred winners from 167 runners versus 14 from 318 for Britain and Ireland is far less likely to be a blip, there being a 93 per cent probability that this is not due to chance. If this is so, then it raises the question of what are French breeders doing right that we are not?

To examine this let us look at the most important subset of Cheltenham results: wins by horses bred for jumps (rather than Flat) in Graded and Listed events, considering various aspects of pedigree and development. Here the numbers are even starker – France: 12; Ireland: 9; GB: 0.

First, consider the sires of these winners. Seven (58 per cent) of the French-breds were by Flat Group 1 winners, as were seven (78 per cent) of the Irish-breds, while another one (11 per cent) of the latter was by a Group 1-placed horse; so both countries made significant use of high-class Flat horses as stallions.

One from each set of winners was by a horse who was either unraced (Court Cave) or showed little ability as a racehorse (Saddler Maker).

However, the remaining four (33 per cent) of the French-breds were by horses that showed significant ability over obstacles (Buck’s Boum two, Kapgarde one, Nickname one), whereas none of the Irish-breds were.

So using sires with proven ability over jumps is perhaps one of the factors underpinning the superior results of French-breds.

Next, look at the dams of the leading French and Irish-bred Cheltenham winners. In each case two (17 per cent of the French mares and 22 per cent of the Irish) were black-type winners over obstacles. These percentages are far higher than the three per cent or so normally found in sales of jumps foals.

In terms of dams that won any race at all, nine (75 per cent) of the French-breds but only five (55 per cent) of the Irish-breds were from winning mares – but even the latter number is well above the 20 to 25 per cent typically found in jumps foal catalogues

These figures are in line with a conclusion I have reached every time I have studied the matter: the best broodmares are more likely to come from the ranks of the best racemares – and it appears that French breeders are more observant of this principle.

Just to give hope to optimists, though, we are talking about probabilities not certainties; and the most important winner at the Festival, Al Boum Photo, was from an unraced mare with no black-type winning siblings. That strategy just needs luck!

So the French seem more likely to use stallions tested over jumps and mares that showed winning ability on the racecourse, but these are not the only key differences between the two groups of horses.

Even more important may be upbringing. Of the French-bred winners of major races at Cheltenham eight (67 per cent) made their debuts as three-year-olds, including Espoir D’Allen (April), Al Boum Photo (September) and Frodon (October), while the other four (33 per cent) began their racing careers as four-year-olds.

In contrast, none of the Irish-breds ran at three, with four (44 per cent) first racing as four-year-olds and five (56 per cent) as five-year-olds. On average the French-breds made their debuts 11 months before their Irish counterparts. I can’t prove that this is significant but it seems fairly likely.

What are the implications of these findings for British and Irish breeders? Well the most obvious one is to follow what seems to work for the French:

In recent years the Thoroughbred Breeders' Association has, with considerable help from the Levy Board and the BHA, promoted several programmes aimed to encourage increased testing of jumps mares and their use for breeding. These include:

These programmes involve a slow burn to success; but the number of British-owned Elite Mares has doubled in the past five years, while more breeders are putting fillies into training. These factors will produce greater levels of British wins at future Festivals. The introduction of a British-bred Premium Scheme would further strengthen such incentives.

However, one suggested initiative has so far foundered, on the dubious premise that ‘it wouldn’t work here’. This is that there should be a programme of junior bumpers and National Hunt juvenile hurdles run over two miles, focussing on genuine jumps-breds by precluding entrants from running in Flat races for 12 months afterwards and including black-type events.

Without such a programme, based on the one that has proved so successful for French jumps breeding that the recent Gold Cup, Ryanair Trophy and Champion Hurdle winners all began their jumps careers as three-year-olds, British and Irish breeders are fighting with one hand tied behind their backs.

We really need to untie this hand if we are to punch our full weight.

The Oscar for leading sire at the Cheltenham Festival goes to...