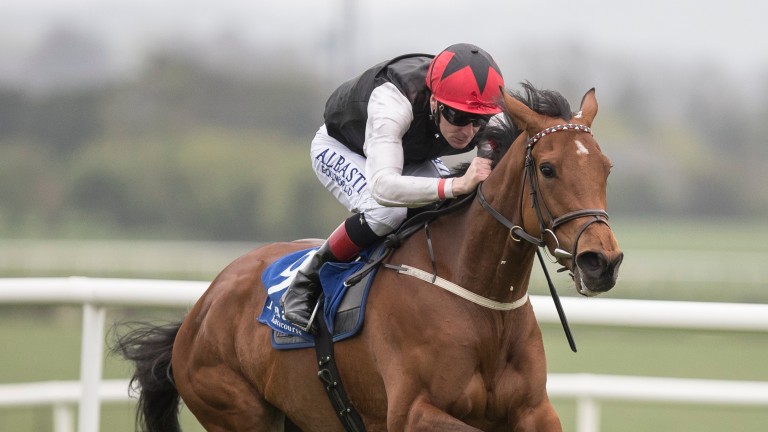 Moyglare Stud had plenty of reason to celebrate after two of its fillies landed both three-year-old maidens at Naas on Sunday.

First to fire was the Dark Angel filly Sorelle Delle Rose, who never looked in danger as she powered clear in the fillies' maiden.

Bred by Yeomanstown Stud, she is out of the Most Welcome mare Kelsey Rose whose other five winners include Group 3 scorers Puff and Sovereign Debt. Sorelle Delle Rose was bought by Moyglare for €350,000 at the 2015 Goffs Orby Yearling Sale.

Kelsey Rose also shares her third dam, Sarong, with Indian Rocket, who won the 6f Group 2 Mill Reef Stakes and was third in the July Cup, and The Bonus King, who won the 6f Listed Woodcote Stakes. She also has an unnamed yearling colt by Charm Spirit.

In yielding conditions Sorelle Delle Rose finished three lengths clear of her nearest pursuers. Among them was Smoulder, a Redoute's Choice half-sister to Legatissimo, who finished sixth.

Sorelle Delle Rose was having her second start following a very promising debut in a course and distance maiden last October.

Completing the double was Tocco D'Amore, who topped the 2015 Goffs Orby Yearling Sale when sold by Kilcarn Stud to Moyglare for €2 million - a price that reflected her illustrious pedigree, as a daughter of Raven's Pass out of the noted Sadler's Wells mare Spirit Of Tara.

Despite her race record - her only win came in a maiden at the Galway festival - Spirit Of Tara developed into a quality broodmare responsible for five runners with an RPR of 100 or greater, including Echo Of Light, Irish History and Flame Of Gibraltar.

Spirit Of Tara is in turn out of the champion three-year-old Flame Of Tara, a hugely successful broodmare with eight runners with an RPR of 90 or greater.

The most celebrated of these were Salsabil, whose three Classic victories include the 1,000 Guineas, Oaks and Irish Derby; and Marju, who was second in the Derby and won the St James's Palace Stakes when stepped back down in trip at Royal Ascot.

Tocco D'Amore was one of a number of regally-bred runners in the contest. Despite running green and her jockey concentrating on education, she surged six lengths clear of the New Approach colt Clongowes - who is out of a Yorkshire Oaks winner in Punctilious - with the Galileo colt Belgravia in third.

Belgravia is out of the Kingmambo mare Love Me True, making him a brother to Derby hero Ruler Of The World, as well as to Giovanni Canaletto who was fourth in the 2015 Derby. Belgravia is also a half-brother to five-time Group 1 winner Duke Of Marmalade.

Pat Smullen rode both winners for trainer Dermot Weld. He was completing a treble after a winning ride on Zoffany's T For Tango in the opening two-year-old contest.

FIRST PUBLISHED 7:14PM, APR 9 2017
Despite her race record - her only win came in a maiden at the Galway festival - Spirit Of Tara developed into a quality broodmare