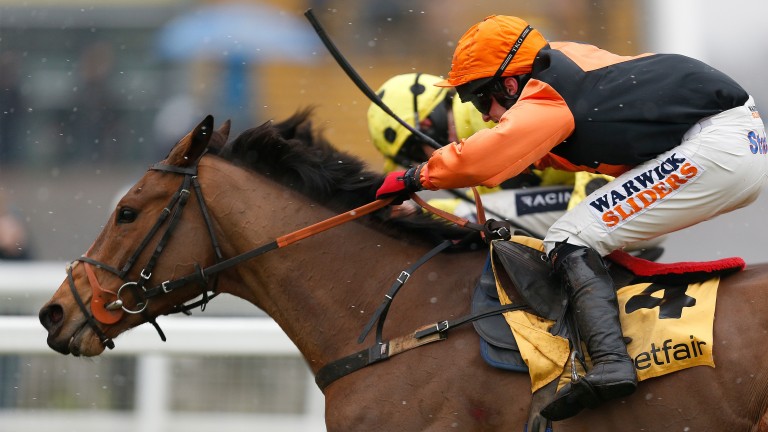 With multi-millionaire owners and their trainers dominating results at Cheltenham last year and appearing to hold the aces at next week's renewal, victory for Tobefair in the Pertemps Final next week would be a welcome triumph for David over Goliath.

The seven-year-old, one of only eight horses trained by Debra Hamer close to Carmarthen Castle and owned by a group of regulars at the Cresselly Arms in Cresswell Quay, advertised his festival credentials by completing a string of seven successive wins with a determined victory in a competitive handicap at Newbury last month.

The story of Tobefair's rise to fame has some surprising elements. First, although he did not come with a six-figure price-tag attached, he is far from plebeian and in fact hails from a distinguished maternal family. Second, he may be another feather in the cap of British jumps breeding, which has been enjoying a golden spell of late courtesy of Coneygree, Cue Card, Rule The World, Thistlecrack and Unowhatimeanharry, but his lack of a sales history shows how hard it can be for operators in Britain to make the game pay.

Amiable Cork native Richard Kent bred Tobefair at his Mickley Stud in Shropshire from home stallion Central Park, a horse who had the profile to excel as a source of jumps talent as a well-bred Group 1 winner by In The Wings out of a Relkino mare. In the year Tobefair was born, Central Park's brother Buena Vista won the first of back-to-back renewals of the Pertemps Final, portentously perhaps.

However, as Kent says candidly, “Central Park was a kind horse but he wasn't blessed with looks and neither were his progeny, so it was hard to make any money out of them”.

In the year after Tobefair's birth, Central Park was moved on to Mount Brown Farm in Galway, where he died several years ago. As is so often the way in jumps breeding, the stallion's passing was little mourned at the time but he is finally showing his mettle as a jumps sire now it is all too late. Besides Tobefair, this season has also yielded Grade 2-winning mare Colin's Sister, useful handicap chaser Oldgrangewood and promising bumper scorers Martello Park and Mcgowan's Pass.

Tobefair is out of the late Nan, a daughter of Buckley related to useful sorts After Me Boys and Bonalma bred by Robin and Scarlett Knipe, who also gave the world Cheltenham Festival heroes Anzum, Master Oats and Thistlecrack. She was bought by Kent as an unbroken five-year-old for just 2,000gns and named in honour of his grandmother, whose surname was Buckley.

The first three foals Kent bred from Nan scored between the flags and the fourth, the Karinga Bay gelding Sweeney Tunes, was sold cheaply by Kent but eventually landed the Grade 2 Nas Na Riogh Novice Chase and finished fourth in the Irish Grand National for Michael O'Leary.

The Hedgewitch (2009 mare by Overbury) Unraced

Then came Tobefair, who was given to the Down The Quay Syndicate leader Michael Cole in return for him looking after two filly foals for Kent, and his year-younger brother Billy Bronco, who was trained by Hamer to win a Towcester bumper in January 2016 and sold on for £110,000 to Evan Williams, for whom he won an Ayr maiden hurdle 12 months later.

“Tobefair was born in the middle of a recession and we couldn't give him away to trainers so I gave him to Michael Cole as a present; there wasn't a penny made out of the horse at any stage of his life,” says Kent. “But I'm glad for Michael, he sends us mares every year and is a very nice man.

“We had Tobefair's full-brother in training and called him Billy Bronco after my Nan's son - we brought him back to England and his lorry broke down in Pembrokeshire, so gave him to the Hamers to train and they gave me £3,000 for him.

“It just shows how tough it is breeding these jumps horses.”

So, while Tobefair's owners would be ecstatic were he to win at Cheltenham next week, and the general public will celebrate one up for the underdog, for Kent a victory might elicit more of a wry smile.

“In the old days when there were breeders' prizes you would have earned a lot of money out of him, but they're gone now as well,” he says with resignation but good cheer nonetheless.

Although Kent may not have profited from his association with Tobefair, he comes out of the tale with credit as a responsible custodian of the horses he produces even when faced by a lack of market demand.

“As a breeder, when you can't sell the horse you have to try to look after the welfare of the horse to the best of your ability,” he says.

FIRST PUBLISHED 6:00PM, MAR 8 2017
Central Park was a kind horse but he wasn't blessed with looks and neither were his progeny, so it was hard to make any money out of them