Newmarket awash with the progeny of the dual world champion 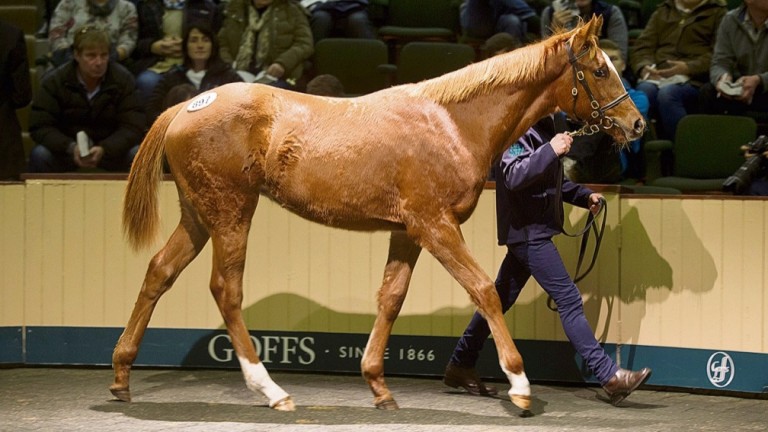 Not only does Frankel have a battalion of blue-blooded two-year-olds due to hit the track later in 2017, but there is also a number from his first crop who did not appear on the racecourse at two who could be well worth waiting for.

Chief among those looks to be La Figlia, the filly out of dual 1,000 Guineas heroine Finsceal Beo. She cost charismatic Australian owner Paul Makin €1.8 million, a record price paid for an Irish foal, when purchased from Goffs in 2014. Finsceal Beo has proved equally adept a broodmare as she was a racehorse, having already produced three winners from three foals of racing age, most notably Beresford Stakes winner Ol’ Man River. It was revealed in October that the filly had left the yard of William Haggas and is now under the care of Jeremy Noseda at Shalfleet Stables.

Haggas may have lost La Figlia, but there is no shortage of offspring of the dual world champion at Somerville Lodge, with Elyaasaat and The Grand Visir under Haggas’s care. Elyaasaat is a colt bred by Shadwell out of Breeders’ Cup Filly and Mare Turf winner Lahudood, who also carried the famous blue and white silks of Sheikh Hamdan, while The Grand Visir is out of Piping, an unraced Montjeu half-sister to Criterium de Saint-Cloud winner Sagacity and Prix de l’Arc de Triomphe hero Sagamix.

The Grand Visir was snapped up by Tony Nerses on behalf of Saleh Al Homaizi and Imad Al Sagar for €750,000 from the Arqana August Sale.

Three-time Group 1 winner Dar Re Mi was among the mares in Frankel’s first book, and having guided her throughout her 17-race career John Gosden has now taken charge of her third foal, the colt Erdogan.

Dar Re Mi has already produced two black-type performers from two runners in Musidora Stakes winner So Mi Dar and the Group 3-placed De Treville, and having cost owners Al Shaqab Racing 750,000gns at Book 1 of the Tattersalls October Yearling Sale, hopes will be high Erdogan can provide his dam with a hat-trick of stakes performers.

It seems apt that so many of Frankel’s progeny are based in Newmarket where his own racing career was nurtured, and another of his sons to reside in the town is Tsavo, who is with one of the rising stars of the training ranks in Hugo Palmer. The April-born colt was bred by Al Asayl Bloodstock out of Hazel Lavery, who defeated Frankel’s brother Noble Mission when winning the 2012 St Simon Stakes.

FIRST PUBLISHED 8:00PM, JAN 3 2017
Having cost owners Al Shaqab Racing 750,000gns at Book 1 of the Tattersalls October Yearling Sale, hopes will be high Erdogan can provide his dam with a hat-trick of stakes performers