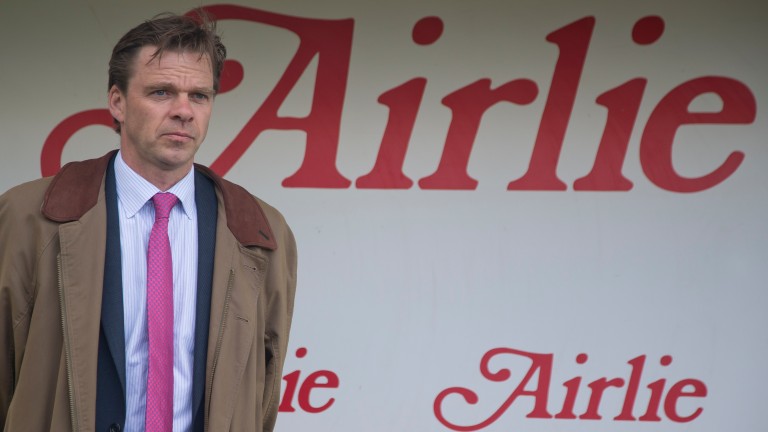 How and when did you become involved in racing? I was born into the sport. Fourth Generation, my Great Grandfather J T Rogers and grandfather Darby Rogers both trained, and my father, Captain Tim Rogers, started Airlie Stud, so it was in the blood and there was no getting away from it.

Who has been the greatest influence on your career? My mother. My father died when I was 12. She didn’t really push me into the sport but she found me jobs on very good farms or for trainers. I first went to Circle O farm in the US when I was 18. I worked in Australia at Widden Stud and for Dick Mandella in California, William Inglis in Sydney and for Three Chimneys Farm in Kentucky. She took over from dad in 1983 and she kept the whole thing going with two sons. She still sits opposite me in the office and she’s a great help in every way and a real inspiration.

What aspect of your job do you most enjoy? Watching the horses develop from foals to yearlings, and then seeing them on the racetrack. It’s a commercial operation so we sell a large amount. You sort their matings, you foal them, watch them develop, prep them as yearlings, then sell them and they disappear. Seeing them on the racetrack after a year or so gives me a huge buzz, especially seeing them succeed. There are plenty of highs and lows, but hopefully the highs outweigh the lows.

And least enjoy? Being the bearer of bad news. Horses will try and do anything they can to injure themselves in any way. It’s ringing up owners and telling them bad news, that’s never much fun. But the ones that have been in the game a long time realise the ups and downs of the sport.

Best day in the business? There’s been a lot of good days. One of my early highlights was my first winner - Cinnamon Rose - winning in my colours, which had been my father’s. She won a maiden at Roscommon. I went with a good friend of mine, a doctor who was over from England. We had quite a large punt at 12/1 and she won nicely. We bred her, we raced her and she then went on to produce a Moyglare Stud Stakes winner in Chelsea Rose. I was hooked anyway, but that’s what really got me going.

If you intended to spend £1,000,000 on a yearling, whose opinion would you seek? And who would you want to train and ride it? I’d rather buy four for £250,000. If we buy foals or yearlings, it’s myself, my mother and David Sullivan - the general manager of Airlie Stud - who go around and buy them. I’d split them between four trainers. We pretrain our yearlings with Dick Brabazon on the Curragh, I'd speak with him and decide who they should go to based on the individual. I’d let the trainer decide who to ride them.

If you could have owned any broodmare, past or present, who would it have been? Everyone tends to say Urban Sea because of Galileo and Sea The Stars, but I wouldn’t mind having employed the late Richard Galpin, who bought Reprocolor and One In A Million for Meon Valley Stud. Reprocolor’s family is unbelievable, you see the pedigree and it’s black-type all the way through.

Who do you most admire in bloodstock? I think Dick Mandella is an absolute genius. He's an amazing horseman. He's only ever had 60 horses but his attention to detail and how he gets the best out of them is amazing. I learned a huge amount from him and we’re still good friends and catch up at the sales.

What would you like to see change in the industry? I would like to see more prize-money and smaller stallion books. I’ve worked in Australia, America, been to Hong Kong, Japan and even France, and they all have better prize-money than Britain and Ireland. Just 15 years ago you might try and pick up a race at a smaller track but now you’ll come up against a couple of Galileos, Street Crys or Teofilos so it’s very tough. Prize-money has got to improve, or we’ll lose the best horses to other racing jurisdictions and struggle to attract new owners.

What is your ambition? Breed more Group 1 winners. In the early years we had few and it’s been a bit quieter more recently but that is the pinnacle. Any Group 1 is hard to win so I would take any of them. We came close with White Muzzle, who died recently, in the Arc in the same year as Urban Sea won and I was gutted. He was unlucky.

Advice for someone hoping to get into the industry? It’s a great opportunity to travel the world. Try and work in all facets of the business. Work with trainers, stud farms, breeding farms, even try and work in some auction houses and try and pick up everything. Also, be prepared to get your hands dirty.

If you could only breed to one stallion who would it be? Dubawi is getting close and Tapit is pretty good in America, but Galileo is a freak. His progeny have this amazing mentality which he passes on, they just want to do it. He’s a beautifully made horse, and really stamps his stock.

What do look for when sourcing a broodmare at the sales? The four Ps. Pedigree, presence, performance and price. If you get all four, it will probably cost you a million. You have to be prepared to forgive.

What are the most important aspects of sales preparation? It’s pretty much from the conception to the day they get sold, it’s no one quick thing. Nowadays one of the most important aspects is to satisfy the vets with the x-rays and the scope. If you haven’t got those, you’re in trouble, which a lot of the time is out of your hands. The feeding of the mare, the land management, the horse management, the lads handling them, there’s a lot of aspects.