The Queen's Recorder to stand at Haras de Montfort and Preaux

The Group 3-winning son of Galileo introduced at a fee of €6,000 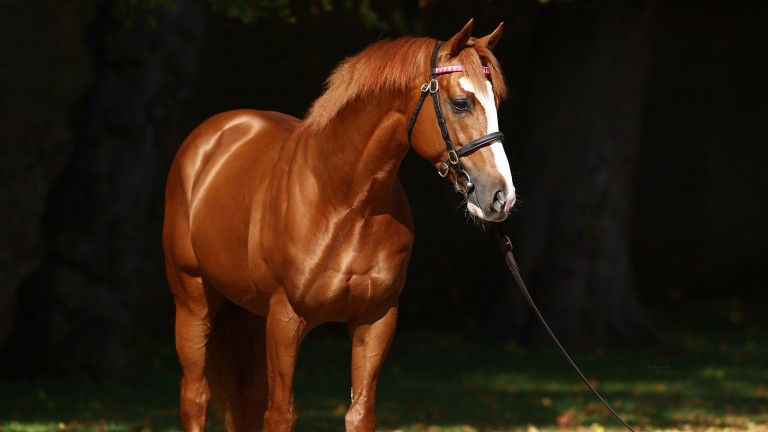 Recorder: "This son of the champion Galileo has everything needed to succeed at stud"
1 of 1
By James Thomas 5:07PM, NOV 6 2017

The Queen's Recorder, a Group 3-winning two-year-old by Galileo, has been added to the Haras de Montfort and Preaux roster to join the likes of Le Havre and Rajsaman, where his introductory fee has been set at €6,000.

Recorder ran just three times at two, but won twice and quickly made up into a very smart performer before injury curtailed what looked a most promising racing career. His finest hour came when landing the 2015 Group 3 Acomb Stakes by a comfortable length and a quarter, with Prix Jean-Luc Lagardere runner-up Cymric back in third, an effort that saw him earn a Racing Post Rating of 108.

He also defeated subsequent Group 1 winner Ventura Storm when breaking his maiden over 7f at Newmarket in July.

Bred and raced by the Queen, Recorder is the first foal of the Albany and Cherry Hinton Stakes winner Memory, a daughter of Danehill Dancer. Memory's other offspring include the Listed-winning and Group 2-placed Call To Mind and the Listed-placed Learn By Heart, a son of Frankel who fetched 160,000gns when bought by Bent Olsen at the Tattersalls Autumn Horses In Training Sale.

The Galileo - Danehill Dancer cross has been responsible for the likes of recent Group 1 winner Alice Springs, Minding and The Gurkha.

"We are, of course, very happy to have been chosen by the Queen and her team to stand Recorder at Montfort and Preaux Stud," said stud owner Sylvain Vidal. "It is an honour and a very positive sign for French breeding. When John Warren contacted us, it was immediately clear to us that Recorder, bred by Her Majesty the Queen, was very dear to her. The Queen wishes to support him with her own mares and give him his best chance at succeeding, which means a lot to us. I would also like to thank Richard Venn for his help." 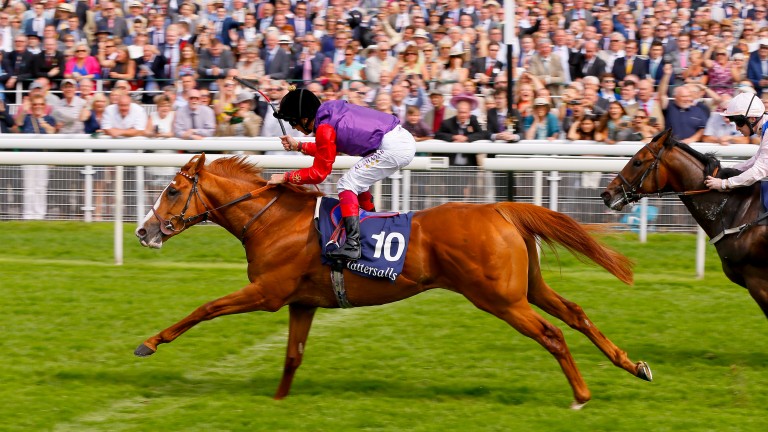 Recorder lands the 2015 Acomb Stakes at York
Mark Cranham
The Queen's racing manager John Warren added: "France is doing so well with their very good stallions. We have been following the great success of the people at Haras de Monfort and Preaux and when I suggested to Her Majesty that they were very good professional people she was keen to send her horse to them. We hope the French breeders find in Recorder an opportunity to use a precocious but Classically bred stallion.

"Her Majesty will certainly be sending mares to Recorder as we believe that the horse could have been top class. The Queen inspected Recorder at Sandringham last week and we stood there saying that for all we know we might be looking at the winner of the 2,000 Guineas."

"This son of the champion Galileo has everything needed to succeed at stud," said Haras de Monfort and Preaux manager Mathieu Alex. "Very precocious, he was one of the best English two-year-olds, notably finishing in front of Cymric by four and a quarter lengths in the Acomb Stakes. His trainer, William Haggas, was convinced that he had potential and looked to the Group 1 Phoenix Stakes.

"Very well bred, Recorder boasts two of the bloodlines that have been instrumental in Coolmore's success: Galileo and Danehill Dancer. As soon as we saw Recorder at the Royal Studs, we were convinced by his physique. He is a magnificent horse, powerful, very elegant and a wonderful mover. We are truly delighted to be standing Recorder and we would like to invite all the breeders to come and visit us at the stud to see him."

If you enjoyed this story you may also like...

FIRST PUBLISHED 5:07PM, NOV 6 2017
Her Majesty will certainly be sending mares to Recorder as we believe that the horse could have been top class