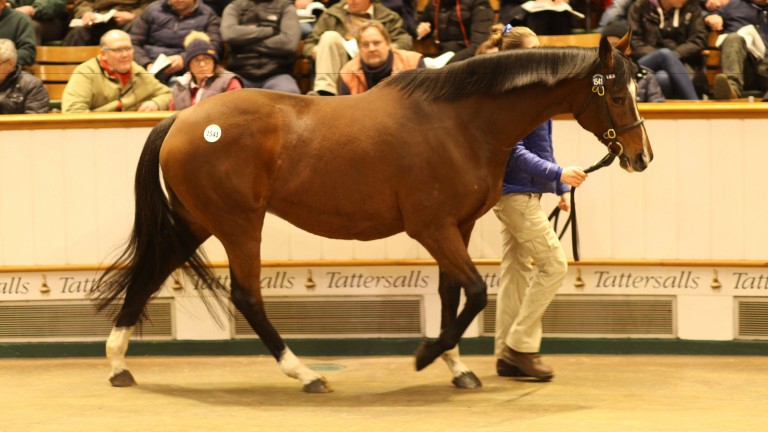 The Miniver Rose taking a turn round the ring at Tattersalls on Monday
Laura Green
1 of 1
By Zoe Vicarage 3:51PM, NOV 30 2016

Dubawi was responsible for three of the four top lots at Book 1 of the Tattersalls October Yearling Sale and Darley's flagship stallion was again the big draw in Tuesday's opening session of the Tattersalls December Mare Sale as The Miniver Rose, the only mare catalogued in foal to him, headed affairs at 550,000gns.

Offered as part of the draft from Godolphin, which has undergone a worldwide 'pruning' of its bloodstock this year, the ten-year-old mare was the subject of a protracted bidding duel between Richard Brown of Blandford Bloodstock and David Redvers.

It was Brown who came out on top for The Miniver Rose, a daughter of High Chaparral who won the Park Hill Stakes and has produced three foals, two to southern hemisphere time, since retiring to the paddocks.

Brown, bidding for an undisclosed client, said: "It's Dubawi isn't it? It's such a rare opportunity to get into him. She's a gorgeous mare but the cover held massive appeal. He's a world-class stallion, he's in the top two stallions for me.

"Luckily I had a client who'd been trying to get to Dubawi for a long time with limited success and I'd say that's not going to get any easier. When a mare comes up in foal to him we wanted to take a throw.

"She's a great-moving mare with lots of quality and she was a very good race filly in her own right. She'll stay here and we'll decide on another cover."

International buyers always make their presence felt at the December Mare Sale and an Australian influence proved a big draw for Arrowfield Stud as they went to 360,000gns to secure Phyllis Maud from the Godolphin draft.

The four-year-old daughter of Halling boasts a classy pedigree being a half-sister to Hartnell, a son of Authorized who has flourished since being exported to Australia, where he has won two races at the highest level and was last seen finishing third in this month's Melbourne Cup.

Phyllis Maud boasted rarity value as she was offered in foal to Shamardal, who covered exclusively mares owned by the Maktoum family and their associates in 2016.

Arrowfield's Paul Messara, who signed the docket, said: "We'll foal her here and take her home to Australia. She's an obvious pick for us as Hartnell is a very good horse at the moment. We just thought she'd be a good mare for us.

"We might cover her to southern hemisphere time and then take her home. It's been a while since we bought here."

Marigold to bloom for Newton Anner

The operation has been buying mares this winter to support its dual Group 1 winner Fascinating Rock, who joins the roster at Ballylinch Stud for the 2017 breeding season.

Marigold Hotel, a four-year-old daughter of Galileo who was offered by Norelands Stud in foal to Mastercraftsman, is a half-sister to Group 1 scorer Simply Perfect and to One Moment In Time, the dam of international performer Bondi Beach.

Reilly said: "She's a great cross for Fascinating Rock, being by Galileo. Maurice is doing everything he can to support Fascinating Rock and this was a very attractive mare with a great walk.

"She reminds me a lot of those Galileos I used to buy years ago for Jim Bolger - those big walking Galileos."

David Redvers stuck to a family he knows when parting with 325,000gns to secure Let It Be Me, a daughter of Mizzen Mast who had led much of the day's early trade.

The seven-year-old is the dam of South Seas, a Group 3-winning son of Lope De Vega who is trained by Andrew Balding for Qatar Racing.

Redvers had purchased the two-year-old for 145,000gns at Book 1 of the Tattersalls October Yearling Sale last year.

He said: "She's the type of physical that only a mother can love! But South Seas is as good-looking a horse as you could find and he ould win a Group 1 next year. For a horse by Lope De Vega he is all quality and athleticism.

"You've got to hope that she's a freakishly good broodmare and Peter Molony saw the Lawman filly [foal] who is apparently attractive. We had the benefit of knowing that's she produced two beautiful foals from her first two stabs at it.

"She's been added to the elite broodmare band that Sheikh Fahad is putting together and we're trying to breed another South Seas. She could go to a number of horses - Charm Spirit, Invincible Spirit or Lope De Vega. That'll be Sheikh Fahad's project."

Lascelles strikes a tune for Sonata

Moonlight Sonata, a winning daughter of Galileo in foal to Mastercraftsman, was bought by Hugo Lascelles from The Castlebridge Consignment for 280,000gns.

The four-year-old is a half-sister to John Gosden's Group 2 performer Western Hymn and further back it is the family of Group scorers Fantasia and Pink Symphony.

Lascelles said: "I liked the family as it goes back very well and there's speed in there too. Western Hymn is as tough as nails and there's a lot happening with Fantasia as well. She's a good-looking mare with a good depth of pedigree."

Also to hit 280,000gns was Spy Ring, a winning two-year-old daughter of Bushranger for Qatar Racing consigned by Jamie Railton. She was bought by Gordian Troeller for trainer Jim Cassidy and will continue her racing career in America.

A new mate for New Bay

The three-year-old won once over 6f on the all-weather for Sir Mark Prescott and had finished second and third in two Listed contests during 2015.

Flanagan said: "We'll foal her in the new year and pencil her back into New Bay, who we've just bought a 20 per cent share in.

"We're going to support him heavily and buy good-moving mares with high race ratings and if they have good covers such as Lope De Vega, who also stands at Ballylinch, all the better.

"She'll board at Norelands Stud and will be our first mare there. New Bay is a Group 1-winning son of Dubawi who won a European Classic and he's got a hell of a pedigree. There are some really good people in the New Bay syndicate. He'll have very good support."