'The buyers had their piggy banks open, and it was quite a show'

Expectations surpassed as $66 million is turned over in second session 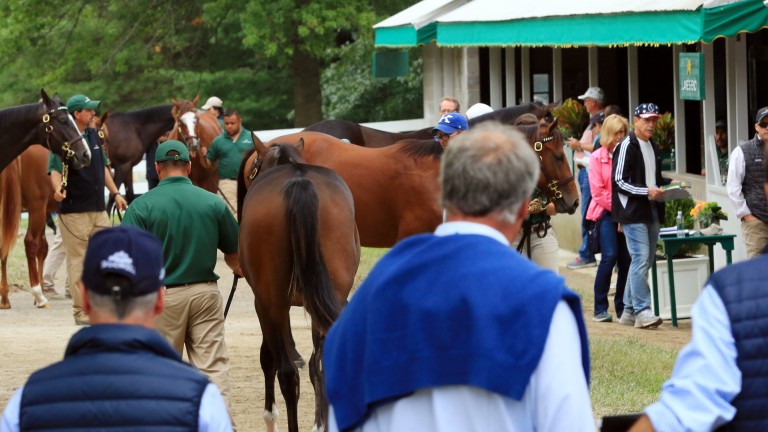 Competitive trade was reported across all levels of the market at Keeneland
Keeneland/Photos by Z
1 of 1
By Ron Mitchell of BloodHorse 4:03AM, SEP 12 2018

Yearly session-to-session comparisons are difficult because last year's sale began with a super-select, one-day Book 1 followed by a three-day Book 2.

This year, the sale kicks off with a four-day Book 1.

"We were cautiously optimistic, but I can't say we knew it would be as strong as it was today. That blew away our expectations," Elliston said.

"Everyone had high hopes, given the quality we have seen, observing what has transpired in other sales this summer, and knowing the entire world would be coming to this sale. The buyers had their piggy banks open, and it was quite a show."

Eight yearlings sold on Tuesday for $1m or more, bringing the number of seven-figure sales to 13, the same number sold at that level during the entire 2017 auction.

Leading the way was the War Front colt consigned by John Sikura's Hill 'n' Dale Sales Agency as hip 458 and purchased by MV Magnier on behalf of Coolmore interests.

The colt, bred in Kentucky by Hill 'n' Dale Equine Holdings and the Stretch Run Ventures of Sikura's father-in-law, Ed McGhee, is out of the Grade 1-winning Smart Strike mare Streaming, a half-sister to stakes winners Treasuring and Cascading.

"He's a lovely horse with all the right credentials," Magnier said. "We'll bring him back to Ireland, and hopefully he'll end up being a good one. He's by one of the best stallions in America and out of one of the best families in America. It's a lot of money to pay for a horse, but he deserved it. Let's hope we made the right decision."

One yearling who would have been among the day's leaders before being bought back was Triple Crown winner Justify's half-brother.

Consigned by breeder Glennwood Farm, the Will Take Charge colt returned home on a final bid of $1.75m.

Godolphin struck late for two consecutive purchases, going to $1.3m for a Curlin colt and $975,000 to acquire a Quality Road colt.

Consigned by Eaton Sales, agent, as hip 456, the Curlin colt is out of the stakes-winning Flatter mare Stoweshoe, a half-sister to two stakes winners, including Grade 1 winner Taris.

Hip 457, the Quality Road colt from the Stone Farm consignment, is a half-brother to Grade 3 winner Prime Attraction and stakes winner Kathy's Song.

Not far behind Godolphin was Sheikh Hamdan's Shadwell Estate Company, which purchased six yearlings Tuesday for a total $3.86m, bringing its two-day total to 12 head bought for $7.15m.

The colt is the first foal out of the stakes-placed Lookin At Lucky mare Pin Up. The colt, bred in Kentucky by St Elias Stables and Joseph Allen, is from the female family of Group 1 winners Yesterday and Quarter Moon.

"He was a very good individual," said Dilger, adding he did not expect the colt to bring that much. "He is a very nice horse with a great page, but you're always surprised when you come up here. So I'm absolutely delighted with the colt and the price for him, and also for the breeder giving me the opportunity to sell for them.

"His balance and his movement made him a standout," Dilger added. "All week long, he came out and did everything right. And people were telling me that they just really liked this individual. And after that, the horse sold himself."

Gainesway was the leading consignor on Tuesday, selling 18 yearlings for $8.715m.

The sale continues on Wednesday with a session that begins at 1pm local time.