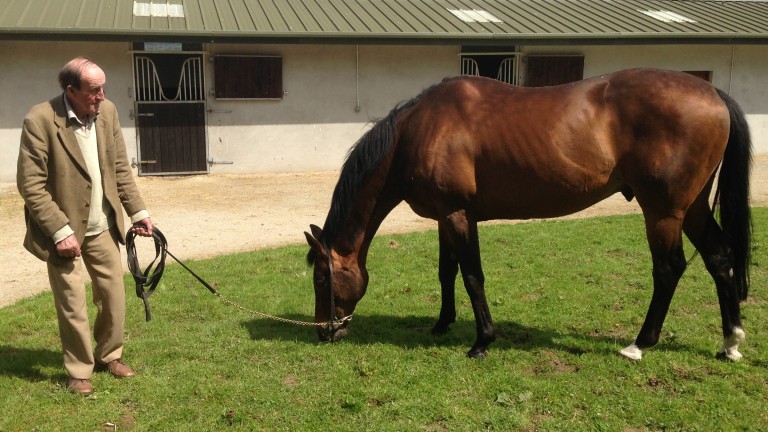 Bobby McCarthy with Flemensfirth, from whom he bred two winners at Leopardstown this weekend - Alletrix and Relegate
Martin Stevens
1 of 1
By Martin Stevens 9:39PM, FEB 4 2018

A week after Beeches Stud owner Bobby McCarthy received the accolade for lifetime achievement at the Irish Thoroughbred Breeders' Association awards, the man who bred Grand National hero Amberleigh House and pinhooked Cheltenham Gold Cup winner The Thinker was on the mark at the inaugural Dublin Racing Festival as the breeder of the winners of the first and last race on the second day of action.

The double was completed by Relegate, who took the Grade 2 Coolmore NH Sires Irish EBF Mares INH Flat Race by a comfortable one and a half lengths for Willie Mullins and Katie Walsh.

The five-year-old is the first foal out of McCarthy's Silver Patriarch mare Last Of The Bunch, a bumper and dual hurdles winner who is a sister to Listed bumper scorer Funny Times.

McCarthy has stood stallions on behalf of Coolmore since the 1970s and long-time friend and associate John Magnier paid tribute to him at last month's ITBA awards.

“From that day to this we've never had a crossed word and never had to count the change,” he said.

The next Boum stallion

Buck's Boum could not claim the ten Grade 1 hurdling triumphs of his older brother Big Buck's but what he did have that his more famous sibling didn't was an intact set of reproductive organs, and he is making hay in his second career as a stallion.

The 13-year-old son of Cadoudal – no dawdler himself, as he once finished second to Long Run in top-flight company – stands at Haras d'Enki in France and he was represented by two runners-up in big races at Leopardstown over the weekend.

First up, Duc Des Genievres was the runner who got closest to easy winner Samcro in the Deloitte Novice Hurdle. The Willie Mullins-trained five-year-old was bred by Colette Serre out of the winning Round Sovereign mare Lobelie.

Then, just over an hour later, Al Boum Photo went down by just three quarters of a length to Monalee in the Flogas Novice Chase. Also saddled by Mullins, he was bred by Emmanuel Clayeux and Jacky Rauch out of the Dom Alco mare Al Gane, a close relation to Scottish National hero Al Co.

Buck's Boum was also on the mark on Saturday with Coup De Pinceau, who won a Musselburgh maiden hurdle by six lengths for Paul Nicholls.

With his oldest crop aged six, he has 32 winners according to France Galop, which lists him as having 28 yearlings, 28 two-year-olds and only six three-year-olds.

Many of Willie Mullins' string are by the elite jumps sires or, in the case of his many French imports, by familiar continental names.

But Patricks Park, the trainer's winner of the competitive Coral Sandyford Handicap Chase on Saturday, has a far more unconventional pedigree.

The seven-year-old is by Insatiable, a son of dual 2,000 Guineas hero Don't Forget Me who won the Prix Dollar, Brigadier Gerard Stakes and Blandford Stakes for Sir Michael Stoute, as well as finishing a neck second to Alborada in the Champion Stakes.

Patricks Park is one of only eight jumps winners on the Racing Post website by the sire, who stood at Clohamon Stud and is best known for his outstanding French chaser son Remember Rose.

Weatherbys states the stallion last covered mares – only two of them – in 2015.

Patricks Park was bred by Kilnamoragh Stud out of Rose Gallery, an unraced sister to Remember Rose by the little-known sire Gallery Of Zurich, a son of Sadler's Wells' brother Tate Gallery who sired only 32 offspring according to France Galop.

It has been a circuitous route into Mullins' yard for Patricks Park, who was originally trained by David Harry Kelly in Ireland and ran twice for Matt Sheppard in Britain last autumn.

Edwulf another feather in the cap for British jumps breeding

Samcro: the pedigree behind the second coming

So, where does the speedily bred Mr Adjudicator get his stamina from?

FIRST PUBLISHED 9:39PM, FEB 4 2018
McCarthy has stood stallions on behalf of Coolmore since the 1970s and long-time associate John Magnier paid tribute to him at the ITBA awards