Larry Best's colours have been carried by Instagrand, Brill and now Rowayton 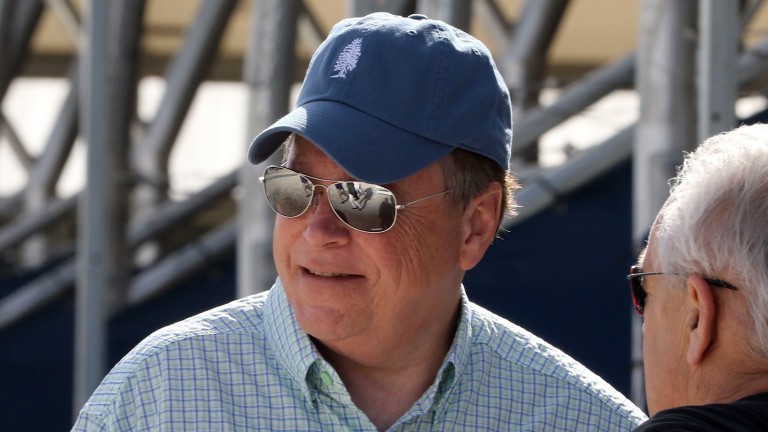 In the span of less than two years, unorthodox American financier Larry Best – who eschews bloodstock agents and generally avoids the media – has spent over $15 million on 17 young horses, once describing himself as “a little addicted” to the allure of thoroughbreds.

He is beginning to reap rewards from his bold, self-guided programme as, teamed with California-based Hall of Fame trainer Jerry Hollendorfer, he has unveiled three of the most impressive juvenile debut winners in the US this season and watched his Instilled Regard finish a creditable fourth in the Kentucky Derby.

Best’s juvenile colt Instagrand, the $1.2m son of Into Mischief who co-led the Fasig-Tipton Gulfstream auction of two-year-olds in training in March, trounced a field of five rivals on June 29 at Los Alamitos Race Course.

Following up that performance was Brill, the $1m daughter of Medgalia D’Oro who topped the Fasig-Tipton July yearling sale in 2017. She recovered from bobbling at the start to stylishly prevail in a field of ten maidens at Del Mar on Wednesday.

Since yet another Best purchase, the juvenile Into Mischief colt Rowayton, cruised home for Hollendorfer in a tough maiden field at Del Mar on Saturday, the owner may no longer be able to avoid the spotlight he dislikes.

Hollendorfer is characteristically low-key about his trainees, but he said before Rowayton’s race that he holds the $320,000 Fasig-Tipton Saratoga yearling purchase in high regard.

He also said that if all continues to go well for Instagrand and Brill, the respective Breeders’ Cup championship races for juvenile colts and fillies are the goals this year.

“Both horses were very impressive and we’re very grateful to have them in our barn,” said Hollendorfer, who emphasised that it’s too early to accurately assess any of the juveniles’ talent.

“We’re dealing with two-year-olds that have made one start, so their potential is ahead of them. They’ve taken their first step, but they’ll have to improve if they’re going to be among the top horses.”

Instagrand is set to run next in the Grade 2 Best Pal Stakes over six furlongs at Del Mar on August 11. Brill could be entered in the Grade 2 Sorrento Stakes at the same distance on August 5, but Hollendorfer said he might skip that contest and aim for Del Mar’s Grade 1 Debutante Stakes at seven furlongs on September 1.

Rowayton’s next goal is to be determined.

Hollendorfer and Best teamed up after conversing at a sale, when the owner told the trainer that they were from the same hometown, Akron, Ohio, and they learned they both had attended universities located nearby.

“We just got acquainted that way, and he decided to try and put some horses with my stable and, so far, it’s working out pretty well,” Hollendorfer said.

While Best might ask him a question occasionally before buying a horse, Hollendorfer said he played no role in selecting Instagrand and Brill – or any of the other horses owned by Best, the 69-year-old former financial services executive who founded Massachusetts-based OXO Capital investment firm in 2007. Best buys and races horses under the name OXO Equine.

“Those horses were chosen by Larry Best himself. That’s the way he likes to operate. He might ask an opinion on one thing or another with a horse, but mostly he does all his own work. He chose Instilled Regard also,” Hollendorfer said.

Best, who also employs trainer Chad Brown on the East Coast and previously had one runner with Michael Stidham, bought his first horses at the 2016 Keeneland September sale, where he paid a total of $900,000 for a Medaglia D'Oro filly he named Moi and a Super Saver colt called Cutter Helm.

From there, Best went straight to the top of the market, buying the sale topper at the 2017 Gulfstream juvenile auction and a pair of seven-figure two-year-olds at that year’s Ocala Breeders’ Sale Co.’s March venue. One of the OBS acquisitions was Instilled Regard, a son of Arch purchased for $1.05m.

“I’m a person that believes in quality,” Best told curious reporters at that OBS sale.

Instilled Regard, who was Grade 1-placed at two, won the Grade 3 Lecomte Stakes in January and despite several mishaps in the Kentucky Derby ran on from 17th early to finish about 4¼ lengths behind Justify. Following that race, he was transferred to Brown and recorded his first workout for his new trainer at Saratoga on Saturday.

While the phones have been ringing with interest following the eye-catching victories by Instagrand and Brill, Hollendorfer said Best wants “to fly under the radar. He’s not looking to be in the limelight".

When asked about Best’s plans for the coming yearling sales and whether he would be there to assist the owner, Hollendorfer said he expects Best will stick to his unique modus operandi.

“Larry is a planner, and I think that’s why he has had great success being a businessman,” Hollendorfer said. “He has a plan for his horses and he’ll follow through on his plan and do most of the work himself and then allow his trainers to get his horses ready.”

FIRST PUBLISHED 2:31PM, JUL 22 2018
He might ask an opinion on one thing or another with a horse, but mostly he does all of his own work