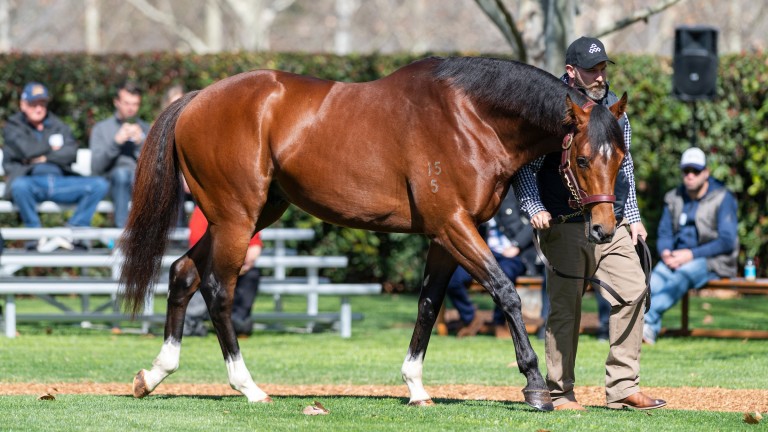 The Autumn Sun struts his stuff at Arrowfield during the Hunter Valley stallion parades
Bronwen Healy
1 of 1
By Tim Rowe and Lewis Lesbirel 5:40PM, AUG 23 2019

Arrowfield Stud supremo John Messara has anointed The Autumn Sun as the heir apparent to his champion sire Redoute's Choice as the brilliant colt's trainer Chris Waller made startling comparisons between him and his star mare Winx.

The Autumn Sun was paraded to the public for the first time on Friday at Arrowfield Stud, where he joins a dynasty of sons left by Australia's most dominant stallion this century.

Given the exploits of Winx  - and the enormous pressure associated with her extended winning streak - sitting in the stand admiring The Autumn Sun parade in front of some of Australia's most prominent breeders would appear to be a breeze for Waller, who was on hand for the stallion's 'unveiling'.

Not so, says the man himself, who admitted to fostering a few nerves as the four-year-old circled the packed ring.

"He handled it better than me," Waller told ANZ Bloodstock News. "I was holding my breath making sure he did everything right. It's a daunting time for them but, again, he showed how professional he is."

The Autumn Sun raced for less than a year, winning eight of his nine starts, leaving Waller in no doubt about the high-priced stallion's credentials.

"He was a very good horse and he captured the hearts of racegoers and punters. His will to win was unquestionable and at home he was just the perfect pupil," he said.

"He was quite remarkable to do what he did and I've been lucky enough to work with some of the best horses in the world.

"I often chuckle to myself when people say to me, 'you'll never find a horse as good as Winx again'. I think those people are lucky that The Autumn Sun retired before Winx stopped racing because he really was special."

Waller said: "His development was what I expected but I didn't think it would happen that quickly."

Bred by Arrowfield Stud and Aga Khan Stud. The Autumn Sun was  purchased by Guy Mulcaster on behalf of Hermitage Thoroughbreds for A$700,000 at the Inglis Australian Easter Yearling Sale, and Messara worked hard to ensure The Autumn Sun would return to his place of birth, purchasing a 50 per cent share of the colt after he claimed the Group 1 Golden Rose Stakes.

Even now, Messara admits that he held the then yearling colt in high regard and was initially disappointed at the price he made at the Inglis sale.

"I remember my son Paul reminding me that we thought we'd get $1 million-plus for him as he was such a good sort at the time. We expected him to be right at the very top."

Already seen by Messara as the successor to his late sire Redoute's Choice, who died earlier this year, The Autumn Sun's book of mares will still be carefully managed.

"A lot of lines will work with him but we're trying to stay away from the Danehill line altogether, even in their second and third dams," he said. The Autumn Sun is a grandson of legendary sire Danehill through his sire Redoute's Choice.

"These things can surprise you, you see a couple of seasons and get a decent sample size, then you find that he works particularly well with one or the other.

"We're going to give him some of the best of what we've got here and I must say he's got some wonderful support from outside as well. He goes to stud with every chance.

"I think he's going to be the next Redoute's Choice."

The exact number of mares has not been confirmed but Messara said The Autumn Sun would not be over-extended in his maiden season, particularly as shuttling to the northern hemisphere was being considered.

"When you start with a new sire like that, the insurance company puts a limit of 150, which I think is a reasonable number," he said.

"We have 160 mares booked to him at the moment and we're not taking any more until we figure out whether everything goes right, otherwise we'd be in breach of our insurance."

As for shuttling The Autumn Sun, Messara revealed there had been multiple approaches made from international farms, but that the colt's shareholders were not in a rush to commit to an overseas stint.

"He's got everything and now he's such a magnificent physical individual.

"When we see how he handles his stallion duties, if he does it in a professional manner and he's as fertile as we expect him to be, it's something we will consider."

Make sure you're in the know!

Subscribe to make sure you never miss updates from Australia, New Zealand and beyond and to have ANZ Bloodstock News delivered to your inbox every day. It’s free!