That shrinking feeling: alarming drop in foals born since recession

Michele MacDonald investigates a potential crisis in the sport 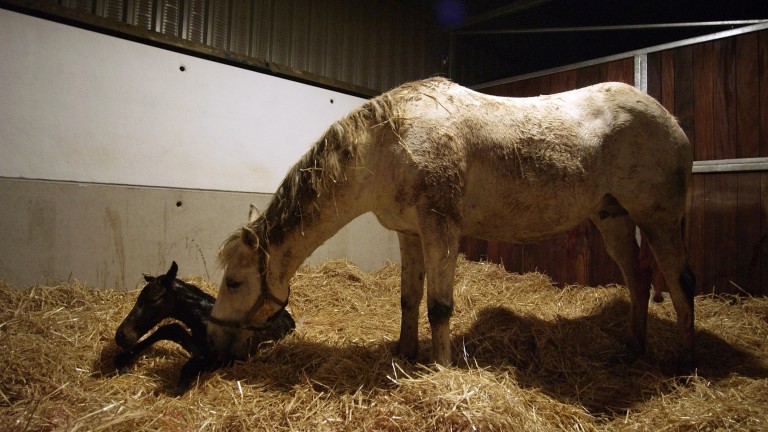 There has been a steep decline in the number of foals born worldwide
Edward Whitaker
1 of 1
By Michele MacDonald 6:32PM, DEC 22 2016

Stung by the brutal blow of the economic recession of 2008, thoroughbred breeding worldwide has shrunk by more than 25 per cent in three key categories from where the business stood less than a decade ago.

The startling decline in numbers of mares bred, active covering stallions and foals born across the globe is a shadow looming over the future of racing as the sport obviously relies on the addition of young horses to the training ranks each year.

Most recent and complete global data compiled by the International Stud Book Committee, Weatherbys and the United States Jockey Club shows the number of mares bred worldwide fell from 198,264 in 2007 to 140,826 in 2015, a drop of 57,438, or 29 per cent, approaching one-third of the total that had been bred just nine years ago.

The number of thoroughbred foals born plummeted by 32,986, a decline of 27 per cent, from 2007 to 2015. To put that figure in perspective, it is more than the number of foals produced by Australia and Ireland – the world’s second and third largest producers of thoroughbreds – combined in 2007.

“These worldwide trends are very alarming, really,” said Julian Richmond-Watson, chairman of the Thoroughbred Breeders’ Association. “In the end, we may not be able to supply horses to fulfil the race meetings that the racetracks want to put on.”

While prominent international breeding authorities have followed the trends, they have not discussed them publicly in much detail. Instead, numbers have been quietly released showing only year-on-year changes in some countries, or during the International Federation of Horseracing Authorities’ annual conference, without in-depth examination or commentary regarding how – or if – the remarkable declines could be reversed.

Richmond-Watson and Dan Metzger, president of the US Thoroughbred Owners and Breeders Association, expect the topic will arise during the International Thoroughbred Breeders’ Federation Congress in Cape Town next month.

“We’re trying to think about how to encourage breeders,” Richmond-Watson said. “The racing industry doesn’t exist without breeders.”

“It does concern you,” Metzger said of the declining numbers. “I think ultimately most people would agree that we’re hopefully near the bottom [of declines] in terms of the foal crop and the number of mares being bred, and that it probably would be good to see a gradual strengthening.”

The US has been, and remains, the world’s largest producer of thoroughbreds and conducts more racing than any other nation. Yet American breeding has been the hardest hit by the recession, as eye-popping declines that approach nearly half the overall business in America clearly reveal.

And even though worries remain in Britain and Ireland about overproduction, the number of thoroughbreds conceived and foaled in those countries also declined precipitously in the recession’s wake.

That huge contraction in the number of stallions is among the most worrying of the trends the statistics reveal, according to Richmond-Watson, as it portends a narrowing of bloodlines and accompanies a modern zeal for sires who throw speed and precocity over those who are known for getting Classic ability. Additionally, the declines underline the lack of time stallions are given to demonstrate their value.

“It must be to the long-term detriment of the breed because we don’t give a stallion long enough [to prove himself]. Because of this commercial reality, people breed to first-season stallions if they are any good or not,” Richmond-Watson said. “It cannot be good for the breed that we don’t keep a diversity going, and a diversity has to be across all the ranges.”

Overall, the data – which was provided by Andrew Chesser, IFHA secretary general and manager of registration services for the US Jockey Club – reveals there were declines in the number of mares bred, stallions covering and foals born in each of the world’s seven largest producing countries from 2007 to 2015, with only one small exception.

Yet the only nation among that group that had growth in any category in 2015 compared to 2007 was France, which reported an increase in the number of foals born – 209 in a crop totaling 5,075 for a rise of 4.3 per cent – compared with 2007 statistics.

Ronan Murphy, managing director of Weatherbys General Stud Book for the United Kingdom and Ireland as well as vice chairman of the International Stud Book Committee (ISBC), gave a presentation to the Asian Racing Conference in January on current global foal production statistics. The ISBC oversees rules, regulations and compliance of the 69 recognised authorities that register thoroughbreds around the world.

However, Murphy demurred when asked for any insights about the worldwide declines in breeding. “It’s not our place to give an opinion on trends,” he said. “At ISBC, we don’t really discuss why the trends are as they are.”

Yet the ISBC, which meets annually in Newmarket prior to the IFHA’s yearly conference in Paris, has agreed to publish an extensive report on breeding data each year in the future “that the whole industry could use”.

“There’s a genuine interest in having a detailed statistical report,” said Murphy, whose Asian Racing Conference presentation showed how important the Americas are to the worldwide supply of horses: North and South America, along with Central America and the Caribbean region, produce approximately 43 per cent of thoroughbreds foaled.

Europe and the Mediterranean region follow, with a total of 22.5 per cent; Australia is next at 15 per cent; Asian countries, dominated by Japan, follow with 14.8 per cent, while New Zealand produces about 3.7 per cent and South Africa just under one per cent.

Murphy, Richmond-Watson and Metzger each noted some signs within the data that could indicate the effects of the recession have eased and that breeding is rebounding, although Richmond-Watson cautioned that it takes years to assess possible trend changes.

As 2016 statistics from Britain and Ireland released recently by Weatherbys show, the foal crop in Ireland increased for the fourth consecutive year and rose seven per cent from 2015 levels to 8,792, although that number is still far below the 12,836 Irish foals born in 2007. In Britain, the foal crop grew by three per cent from 2015 to 4,597, still significantly below the 2007 crop of 5,898.

Addressing whether overproduction might still be an issue in some markets, Richmond-Watson said that in today’s commercial world, as opposed to previous decades in which there were more owner-breeders, there are not enough buyers to purchase all the young horses produced and provide adequate funds to cover the costs of raising of those horses. However, he emphasised that does not mean there will be enough horses for future racing if global declines in foal production continue.

“What it means is there are more horses being bred than there are owners to buy them. It doesn’t mean there are more horses than we need to run the racing,” Richmond-Watson explained. “That’s where the misnomer comes – people get it wrong. Racing would love to have all those horses [that are bred] on the track, but someone has got to pay for them.”

Horses in training sales in 2016 demonstrated that there is a high demand for runners globally.

“Around there world there is an appetite for racing among people who can’t breed horses like we do, in the Middle East or Hong Kong, and so if I was optimistic, It would be at that level. If you can get a horse to a useful level, there is a good market for a horse that is able to race,” Richmond-Watson noted.

Racecourses have become complacent in the overall scenario and must be proactive, he suggested. To help heal the wounds caused by the recession, “they are going to have to wake up and give more incentives to race and breed horses,” he said.