Texas Red to stand at Crestwood Farm in Kentucky in 2017 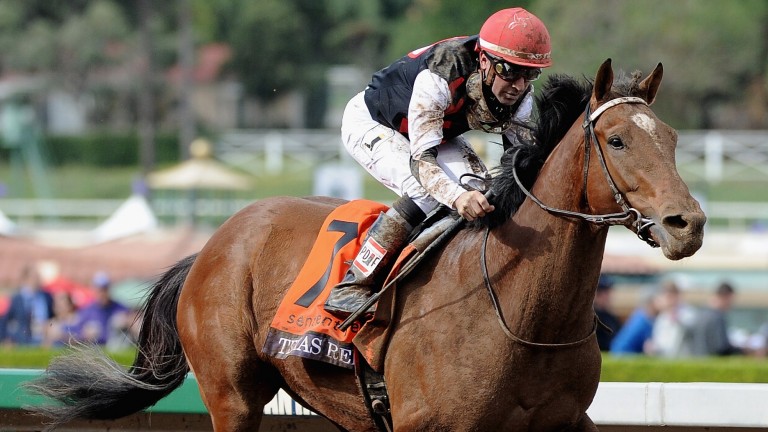 Texas Red, the winner of the Grade 1 Breeders' Cup Juvenile at Santa Anita in 2014, will stand at Crestwood Farm in Kentucky for the 2017 breeding season at a fee of $7,500.

Trained and co-owned by Keith Desormeaux in partnership with Erich Brehm, Wayne Detmar, Gene Voss and Lee Michaels, Texas Red showed early promise with a maiden win at Del Mar before finishing third in the Grade 1 Frontrunner Stakes behind American Pharoah and Calculator.

His two-year-old campaign was capped off in fine style with an explosive six-and-a-half length win in the Breeders’ Cup Juvenile.

He started his three-year-old campaign with a runner-up effort in the Grade 2 San Vicente Stakes to Lord Nelson.

The son of Afleet Alex's second season was held up by a foot abscess, but he returned later in 2015 to capture the Grade 2 Jim Dandy Stakes at Saratoga, when he defeated Frosted.

Desormeaux told bloodhorse.com: "Texas Red has been a superstar since the moment he walked into the barn. It was nice to see those expectations come to fruition. He took my career to new heights and I will always be grateful."

Bred by Stonestreet Thoroughbred Holdings, Texas Red is by dual Classic Winner Afleet Alex, out of the mare Ramatuelle, a stakes winner in Chile who was later placed in the Grade 3 Desert Stormer Handicap.

Texas Red's current owners will retain a majority interest, and will stand him in partnership with Crestwood Farm.

FIRST PUBLISHED 7:45PM, JAN 2 2017
Texas Red has been a superstar since the moment he walked into the barn