Teppal half-sister among the lots on offer at Summer Sale

472 horses will go under the hammer at Deauville in July 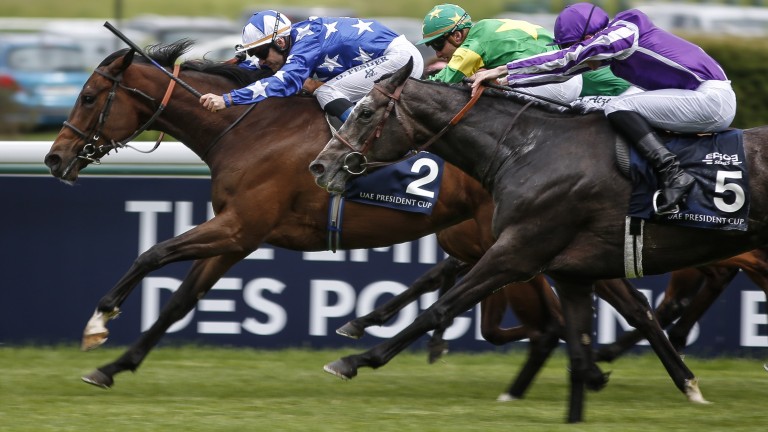 Buyers will have the chance to buy into the family of Classic winner Teppal
Alan Crowhurst
1 of 1
By Zoe Vicarage 11:37AM, JUN 9 2018

A total of 472 lots have been catalogued for the Arqana Summer Sale, which features a mix of unraced two-year-olds, two- and three-year-old stores, breeding prospects, horses in training and National Hunt lots.

The auction will begin its two-day run in Deauville on July 3.

Taking centre stage at the beginning of trade will be the unraced two-year-olds who breeze on July 2.

Among the 71 juveniles catalogued are a Mastercraftsman half-brother to Group 3 winner Actress (Lot 4) and a Showcasing half-brother to Listed scorer Deauville Prince (8).

In the stores section, those that catch the eye on paper are a Martaline half-brother to Grade 1-winning novice hurdler Dortmund Park (95) and a half-brother by Falco to Sky Bet Supreme Novices' Hudle hero Labaik (147).

The second day of the sale is dedicated to breeding stock and buyers will have the chance to snap up Soltada (229), a half-sister to Group 1 heroine Margot Did in foal to Wootton Bassett, and Gonzeville (273), a half-sister to this year's Poule d'Essai des Pouliches scorer Teppal in foal to Haras de Montfort et Preaux's new recruit Recorder.

A total of 183 horses are set to be offered in the horses in training section including the Andre Fabre-trained Masterpiece (389), a son of Mastercraftsman who has been placed in Listed contests, and Emmanuel Clayeux's Etonnant (402), who recently won on the flat by more than seven lengths.

John Dance joins us in the studio to talk Laurens, industry issues and more

FIRST PUBLISHED 7:39PM, JUN 1 2018
In the stores section, those that catch the eye are a Martaline half-brother to Grade 1-winning novice hurdler Dortmund Park