Tepin rings the bell at $8 million at November Sale

Six-time Grade / Group 1 winner is in foal to Curlin 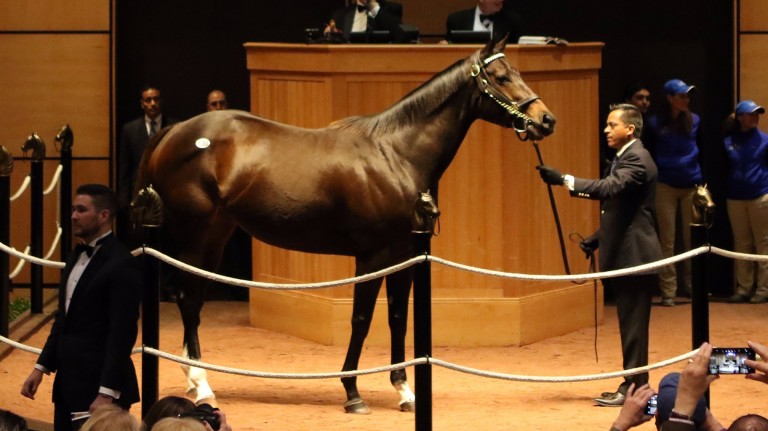 The Fasig-Tipton pavilion was still trying to catch its breath after witnessing a show for the ages by a champion filly. Just when the crowd had begun to digest the magnitude of what it had just happened, another high-profile girl entered from the back ring and turned the place on its ear once more.

On a record-setting evening within the famed auction house, two-time Eclipse award winner Tepin did her usual routine of standing out even among the elite. Moments after fellow champion Songbird brought the house down, selling to Mandy Pope for $9.5 million, Tepin established her own benchmark of excellence, selling to representatives of Coolmore Stud for $8m.

Consigned by ELiTE Sales on behalf of owner Robert Masterson, Tepin elicited the second-highest price of the evening after sauntering into the ring in her usual unflappable fashion. The daughter of Bernstein is currently in foal to Hill 'n' Dale stallion Curlin and is now slated to visit Coolmore's legendary sire Galileo according to MV Magnier, who signed the ticket following a heated bidding battle.

"It's a lot of money, but she's an excellent racehorse," Magnier said. "She's very good looking. She was a good two-year-old and she was good up to the age of five. It's a lot of money but... (trainer) Mark Casse did an unbelievable job with her through her career."

Norman Casse, son of and top assistant to his father, hustled down Interstate 64 after his flight from California arrived in Louisville at 5.30pm in order to be in the pavilion for the mare he oversaw for 23 career starts and six Grade / Group 1 victories. Standing alongside Masterson, Casse's emotions began to overtake him as he watched the bidding open at $1m, then climb in $500,000 and $200,000 increments up to $5.7m.

After hitting $6m and sailing right past that mark in a few more bids, Tepin reached some rarified air at $7m with the action still heated around her. The half-sister to Graded stakes winner Vyjack still didn't turn a hair as the board climbed from $7.7m up to its final destination and exited the ring as arguably the only being unmoved by her latest outing.

"I didn't think I'd get emotional, but I got emotional," Norman Casse said. "It's a cool thing to be part of something like that.

"(As a trainer), you just want to put them in a position to excel at the next level, whatever that may be. I feel like we did our job and now I feel that (Coolmore) will take the next step and they'll do a great job with her. I thought the realistic estimates were around $6 million, so she went beyond expectations."

Bred by Machmer Hall, Tepin went from divisional queen to global superstar in four seasons of racing. In 2015, she earned her first Eclipse award for champion turf female on the strength of a campaign that saw her notch victories in the Just a Game Stakes and First Lady Stakes before beating her male counterparts in the Breeders' Cup Mile at Keeneland.

In her five-year-old campaign she remarkably took her form to an ever greater level. After opening the year with four straight victories - including the Jenny Wiley Stakes - Tepin traveled to Royal Ascot and made history as the first US-based horse to capture the Queen Anne Stakes.

She beat the boys again in the Woodbine Mile that September, her third top-level victory in a third country last year. Though she finished second in the 2016 Breeders' Cup Mile, a second Eclipse award came her way in handy fashion.

"She's an exceptional horse and it will be a long time before we see another one like her," Norman Casse said. "I couldn't be more excited about her future."

"It has nothing to do with Elite Sales," added Bradley Weisbord of ELiTE Sales. "It's all about what this filly has accomplished on the racetrack. Mr Masterson deserves all the credit, what the team accomplished with her while she was racing is incredible."

Tepin is out of the Stravinsky mare Life Happened and retired with 13 wins from 23 starts and almost $4.5m in earnings.