Aidan O'Brien's filly is out of the magnificent mare Immortal Verse 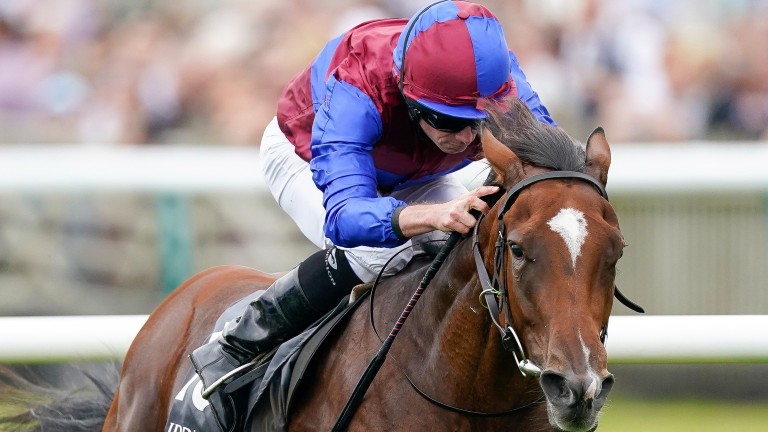 Tenebrism is proving quite a pathfinder for her sire Caravaggio. A first runner for Coolmore's sire at the beginning of the Turf season back in late March, and immediately a winner. Six months later, Aidan O'Brien's filly became his first Group 1 scorer in the Juddmonte Cheveley Park Stakes on only her second start.

Given her name, which relates to a contrasting light and dark style of painting espoused by Caravaggio himself, it is no surprise to see plenty of artistic merit in Tenebrism's pedigree.

She is the fourth foal of Immortal Verse, Robert Collet's wonderful miling daughter of Pivotal who won the Coronation Stakes at Royal Ascot in 2011 followed by the Prix Jacques Le Marois.

Bred by Richard Strauss, former owner of Kilfrush Stud in County Limerick, she was sold for a European record 4,700,000gns to BBA Ireland's Adrian Nicoll on behalf of a Coolmore partnership at the 2013 Tattersalls December Mare Sale. Her dam, Side Of Paradise, was a half-sister to Strauss's towering sprinter and sire, Last Tycoon.

Immortal Verse has been back and forth to America during her breeding career, producing foals for the Irish-American operation Meriebelle Stables as well as Coolmore affiliates Orpendale, Chelston and Wynatt.

She has had two minor winners by War Front in Battle For Glory and Grand Deed and most recently visited Wootton Bassett.

Caravaggio, the swift winner of both the Phoenix Stakes and Commonwealth Cup and son of Scat Daddy, started out with plenty of expectations from his first of three crops from Coolmore's Irish branch. He has since moved to Ashford Stud in Kentucky for the most recent season.

Now the sire of 19 worldwide winners, he has four at black type level including recent Group 2 Debutante Stakes scorer Agartha.

Momentum sustained as Tattersalls December Mares Sale concludes on a high Final sale of the year at Goffs UK offers plenty of potential for purchasers Classy Flat and National Hunt performers added as Ascot wildcards Pick A Nom announced for three stallions at Chapel Stud Bespangled brings 330,000gns as buyers dip into Godolphin goldmine 'Prize-money is ridiculous - but racing is a drug so you have no alternative'