James Thomas looks into the facts behind the big-race results 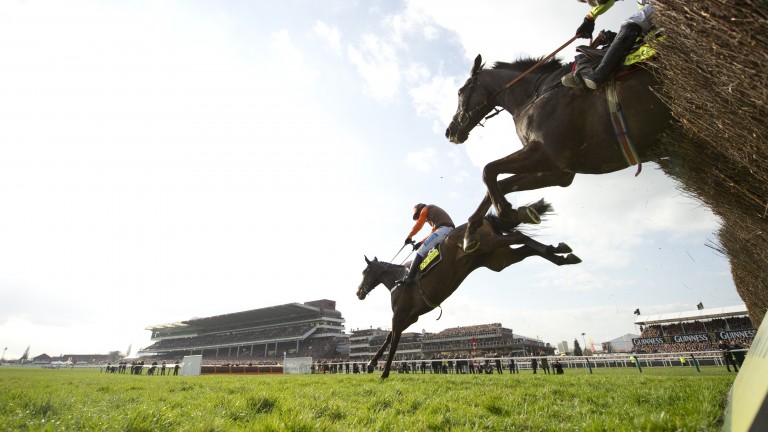 Nature or nurture? It's one of life's eternal questions. While no shortage of natural ability is required to succeed at Cheltenham, the background a horse has had in it's early life can have an enormous bearing on its future prospects. With the festival melting pot about to reach boiling point, we examine the records of three very different groundings...

Whichever side you are on, there is no escaping the partisan feeling that surrounds the Cheltenham Festival as the best of the British and Irish ranks battle it out over four days of white-hot competition.

However, even though they may not be in the running for the Betbright Cup, it is impossible to ignore the impact a third party has on the festival each year - the French.

In the last ten years, 268 races have been run at the festival and an impressive 29 per cent - 77 individual contests - have gone the way of French imports.

This strike-rate improves even further when looking at the results French imports have achieved over hurdles.

There have been 121 hurdle races run over the last ten renewals of the festival, and 37 per cent - 45 individual events - have been won by a horse that began his or her career in France.

Moreover, a total of 21 Grade 1 hurdle races have been won by French imports across the last ten festivals. This includes five of the last ten winners of the Triumph Hurdle, which will no doubt be music to the ears of Apple's Shakira fans. 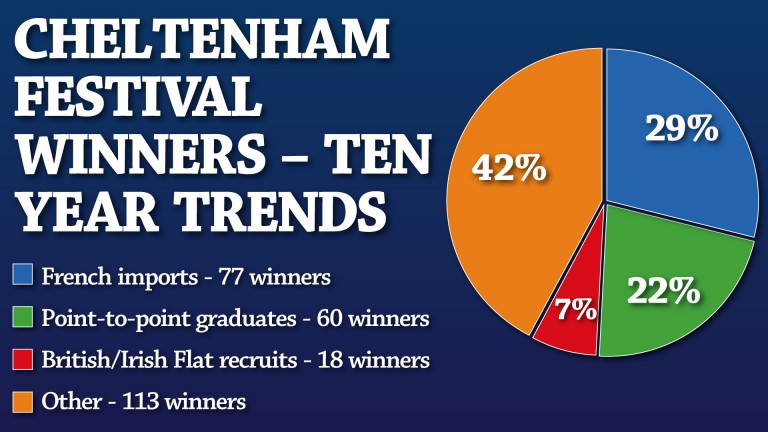 The French have had a couple of notably strong representatives in the hurdling division in recent times, notably four-time World Hurdle winner Big Buck's - whose career kicked off at Fontainebleau - and the mighty mare Quevega, whose first start came in an AQPS bumper at Niort before she went on to win a staggering six consecutive David Nicholson Mares' Hurdles.

French imports have also won 28 regulation chases - 22 per cent of all chases - over the last ten years. Those results include 13 Grade 1s over the larger obstacles, and feature a who's who of festival greats like Kauto Star and Master Minded.

French imports have also accounted for four of the last ten winners of the Cross Country Chase, including the redoubtable Garde Champetre.

Of course, those imported from France often represent the most powerful connections, having been carefully selected - often at considerable expense - based on their latent talent and suitability for British and Irish jump racing, meaning we are seeing a skewed sample of the French crops.

But given they boast a significantly smaller representation than their British and Irish counterparts, the sheer volume of success these horses have enjoyed is noteworthy nonetheless.

The talent that can be unearthed in the point-to-point field has been well advertised over the last ten festivals, with the likes of Denman, Faugheen and Simonsig all having recorded multiple victories.

That high-achieving trio are by no means alone, as point-to-point graduates have won 24 per cent - 60 contests - open to them in that timeframe.

As is to be expected given their grounding jumping steeplechase fences, the point-to-point graduates have come into their own once tackling the Cheltenham chases, having won 31 per cent - 40 individual events - of the 127 races run over fences in the last ten years.

This includes 13 Grade 1s, won by the likes of Imperial Commander, Yorkhill and Blaklion. Native River and Monalee will be among those aiming to enhance that stat this week.

Graduates of the pointing field have also won 17 of the 101 hurdle races open to them over the last ten years, including ten Grade 1s, won by the likes of Champagne Fever, First Lieutenant and Brindisi Breeze.

Former pointers Champagne Fever and Briar Hill have also struck in the Champion Bumper, while Josies Orders - who was promoted to first in the 2016 Glenfarclas Cross Country Chase - began his career in a Dromahane maiden.

There is a huge disparity between British and Irish point-to-point graduates on the festival roll of honour, with those named above all having had their grounding in Ireland. But the British challenge should not be underestimated this year, with Blackbow, Santini and North Hill Harvey all having live chances.

However, it is not all bad news for British or Irish Flat horses at the festival. These types account for 40 per cent of the winners in the festival's two juvenile events, the Fred Winter Juvenile Hurdle and the JCB Triumph Hurdle, having supplied four winners of each race in the last ten years. 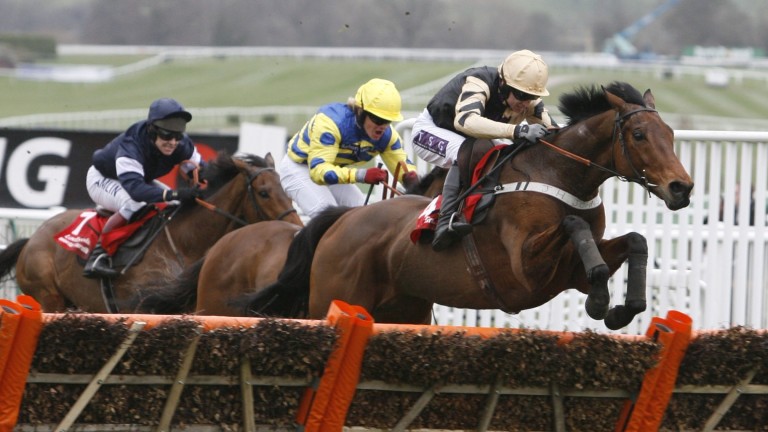 British and Irish Flat runners may not bring much in the way of quantity away from the juvenile events, having supplied just ten further winners during the last ten festivals, but there is no denying that they can provide ample quality.

Six of those ten winners scored over hurdles, including five that landed Grade 1 contests. Champion Hurdle heroes Katchit and Punjabi are among those to have started out on the level, while one of the genuine greats of the staying hurdling division, Inglis Drever, actually began his distinguished career in a 6f Pontefract maiden.

Horses that graduated from the British and Irish Flat ranks have won just the four chase events at the last ten festivals, most notably the 2015 Champion Chase won by Dodging Bullets. The son of Dubawi, who was bred by Frankie Dettori, began his racing career in a Cork maiden, having fetched just 8,000gns as a yearling.

If you enjoyed this, you may also be interested in...

Ten to follow: the sires who could break through at Cheltenham

Five key subplots that can shape the 2018 Cheltenham Festival

FIRST PUBLISHED 6:00PM, MAR 12 2018
Point-to-point graduates have come into their own once tackling the Cheltenham chases, having won 31 per cent of the 127 races run over fences