Taylor Made looking forward to fact-finding mission to Europe

Consignment behemoth set to make its debut selling at Tattersalls 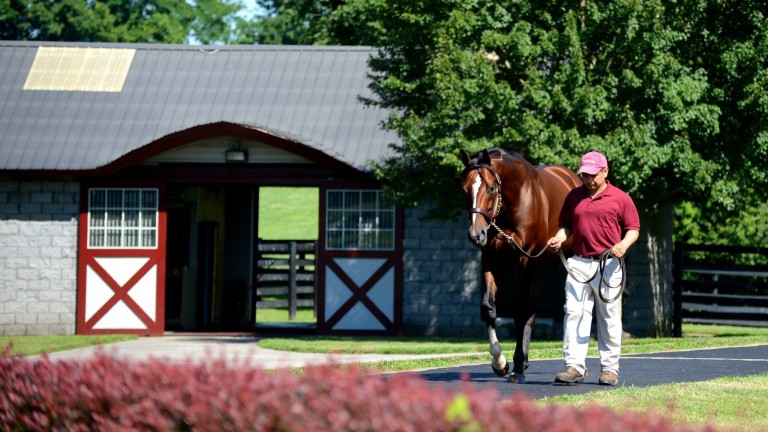 When equine sales behemoth Taylor Made Sales Agency conducts its first overseas venture with six mares consigned to the Tattersalls December Breeding-Stock Sale, it will not be the beginning of any major expansion of the iconic brand into the international market.

Rather than attack the foreign market with the same zeal it has in the US – Taylor Made also is planning a consignment at Arqana in France in 2019 in conjunction with Haras de Gouffern – Taylor Made views the foreign foray as a way to build additional relationships with breeders in other countries, particularly with regard to its private agency transactions that make up about 30 per cent of the agency's annual volume.

"We aren't looking at putting some big footprint in Europe where we are going to try to replicate the Taylor Made American business model in Europe," said Mark Taylor.

"This is basically a relationship building expedition and to go along with it, we have been supported by some very nice horses in Europe. And, we're bringing several nice horses from the US that we feel will suit that market. We want to do this small, boutique quality consignment and see where it goes from there."

The Tattersalls Mares Sale from December 3 to 6 also includes horses from the dispersal of Bobby Flay's European bloodstock.

The six lots offered by Taylor Made include German Group 2 winner Raven's Lady, multiple Group/Grade 3 winner Queen Blossom, US Grade 3 winner and Grade 2-placed Midnight Crossing, and the Montjeu mare Hasten, a sister to Group 1 winner Jan Vermeer and a half-sister to Grade 1 winner Together.

Amy Lanigan of Avenue Bloodstock has been Taylor Made's point person in England, serving as liaison with Tattersalls and also helping with sale staffing.

Taylor said Taylor Made's move outside its comfort zone comes at a time of sustained success and stability within the family-run business.

"Over the last 25 years we have been in a constant growth mode, developing our business in the US and it is a big operation to run," said Taylor of the agency that according to its website has been the highest-growing sales agency worldwide in 18 of the past 20 years.

"We always thought that trying to stretch to new locations and new sale venues was something we didn't have the time or resources to do. We have a better team than we've ever had and business has matured. We have good, longstanding team members that have been with us and know their roles. That has allowed us to feel comfortable in going out and trying some new things."

During his eight-day stay in Newmarket, Taylor plans to expand his knowledge of the British breeding and sales programmes.

"I also plan to look at foals during the Foal Sale and look at the stallions and learn more about the type of horses that appeal to Europeans," he said. "We have been isolated over here. We have been so busy building the business, we really haven't had a lot of time to make trips abroad."

Taylor said Taylor Made's decision to supplement a small group to this year's Ocala Breeders' Sales October Yearling Sale did not reflect a major expansion into the Sunshine State but was borne more out of necessity to find a venue for the individuals.

"Those [horses] were part of a partnership and It was too late for them to get into the October sale and it [OBS] was the last opportunity," Taylor said, adding that OBS sales co-ordinator Chad Johnson had been seeking Taylor Made's business.

"We've known Chad Johnson for some 25 years and he'd always tried to get us to have a consignment there, but it was something we thought we didn't think we had time. We did not want to get our eye off the core business."

Excluding one withdrawal, Taylor Made found new homes for all four yearlings through the OBS ring, topped by an American Pharoah colt sold for $115,000.

"It turned out to be a positive thing," Taylor said. "My brother Frank, nephew Joe, and niece Katie handled the consignment and they got a lot of positive feedback from Ocala people saying that they appreciated us being there to boost the sale and support the economy there. It is something we might look at in a small way in the future but we never want to take a large number of horses there.

"We are primarily a Kentucky-based agency and we're going to sell the vast number of our horses at Keeneland, with a sizeable presence at Fasig-Tipton's Kentucky and Saratoga sales."

Although it does not plan to expand its footprint too far, the family-run agency is in a position to take on small expansion projects like the European and OBS consignments, Taylor said.

"These other initiatives are just a way to expand," Taylor said. "We have a big team and a lot of resources and one of our strengths is flexibility and being nimble, where if our customers want us to do something, we can get organised and do it on very short notice."

Although Keeneland has scheduled a two-year-olds in training sale April 9 after being on hiatus since 2014, there are no plans for Taylor Made to re-enter that market in which it was a major player in the 1990s.

"We sold a lot of good two-year-olds but at the end of the day it was not our core business and we didn't know as much about our product as we should have," said Taylor, crediting Florida horseman Bob Scanlon with prepping the two-year-olds for sale and then being available to respond to buyer questions.

"We couldn't' have done it without Bob Scanlon.

"It was good for a short period of time but it put us in a competitive situation with our customers who sell two-year-olds," Taylor said of another reason for not re-entering the juvenile market.

"We're friends of those people [two-year-old sellers] and they are good yearling customers and we don't want to compete with those guys in any size, shape, or form."

FIRST PUBLISHED 10:43PM, NOV 23 2018
We aren't looking at putting some big footprint in Europe where we are going to try to replicate the Taylor Made American business model in Europe