The median price achieved at Newmarket was a record 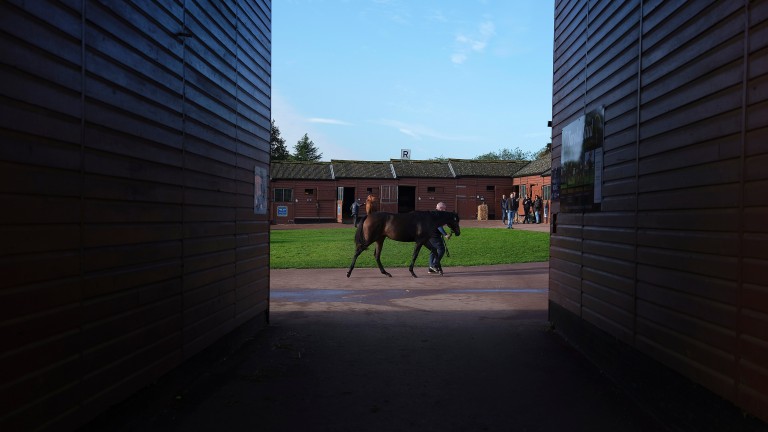 Book 4 on Saturday brought the curtain down on the October Yearling Sale
Alan Crowhurst
1 of 1
By Martin Stevens UPDATED 5:36PM, OCT 19 2019

Tattersalls chairman Edmond Mahony has toasted strong levels of trade at the company's October Yearling Sale, which defied concerns over wider political turmoil in Britain to finish on Saturday with only a small decrease in turnover, a stable average price and an increase in the median figure.

Over a fortnight of selling – the premier Book 1 over three days earlier in the month and Books 2, 3 and 4 this week – a total of 158,155,600gns was spent on horses, representing a three per cent decrease on 2018 when 29 more horses went under the hammer.

The aggregate figure was the third highest in October Yearling Sale history and the median is a new record.

Mahony said: “More than 1,500 yearlings have been sold at Tattersalls in the course of the past two weeks, to swathes of eager buyers from all corners of the world and we should take this opportunity to thank every single participant for their contribution to another successful Tattersalls October Yearling Sale.

“Every year the sale showcases the cream of the European yearling crop and we must recognise that it is the support of the breeders and consignors from Britain, Ireland, France, Germany and further afield which shapes this fixture.

“They provide the quality yearlings which give us the platform to promote the sale and to attract the buyers at all levels of the market in such impressive numbers.”

This year's October Yearling Sale was highlighted by blockbuster results in Book 1, with more than 100 million guineas spent on lots and ten individuals sold for seven figures including the 3,600,000gns Dubawi half-brother to Barney Roy and 3,100,000gns Frankel half-brother to Golden Horn who topped trade.

“It is, of course, important to reflect on the spectacular highlights of Books 1 and 2, which between them contributed more than 150 million guineas to the total turnover just shy of 160 million guineas, but it is equally satisfying to be able to take positives from Book 3,” continued Mahony.

“The sale achieved a record price of 145,000gns for a Book 3 filly, some great pinhooking successes and real competition at all levels. The British and Irish were joined by a diverse overseas contingent and it has been rewarding to see buyers from countries such as the Czech Republic, Hungary, Kazakhstan, Poland and Serbia alongside those from the traditional overseas markets.

“We work hard in these areas and the overseas buyers have all made a significant contribution to the sustained demand throughout Book 3 and the solid clearance rate of 80 per cent.

“There are so many outside political and economic forces at play which could be expected to undermine our bloodstock market, but the past two weeks at Tattersalls have given everyone involved cause to be proud of what this industry has to offer.”

Saturday's Book 4, the final session of the October Yearling Sale, was topped by a son of promising first-season sire Cable Bay who is a half-brother to six winners including the smart sprint handicapper Kyleakin Lass.

The colt, consigned by Rosyground Stud, was sold to Hyde Park Stud for 17,000gns.

'We're over the moon' - small breeders in clover as Stroud buys 145,000gns filly

FIRST PUBLISHED 3:22PM, OCT 19 2019
The past two weeks at Tattersalls have given everyone involved cause to be proud of what this industry has to offer