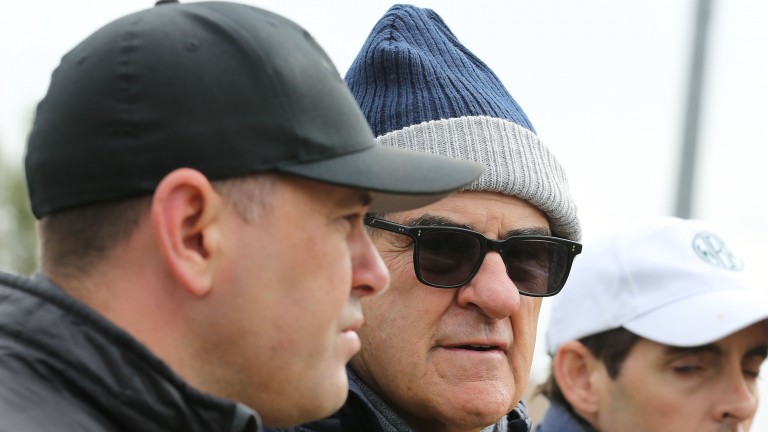 Peter Brant (right) and Chad Brown have made some fruitful visits to Tattersalls
Laura Green
1 of 1
By Bob Ehalt of BloodHorse UPDATED 6:45PM, NOV 21 2021

In reality, the Red Smith Stakes was decided in the final few strides when Serve The King edged past a determined Channel Cat  to score by a neck.

Yet a case could also be made that the victory was set in motion four years ago, when trainer Chad Brown and bloodstock agent Mike Ryan took a bold step and traveled to Newmarket for the 2017 Tattersalls October Yearling Sale.

They came away with 12 horses from Book 1 for owners Peter Brant and Klaravich Stables, one of which was Serve the King, who as previously mentioned tacked Grade 2 laurels onto his Grade 1-placed status by capturing Saturday's featured race at Aqueduct Racetrack.

Buying a Graded stakes winner at any sale is worthy of a tip of the hat, but in this instance Serve The King provided the whipped cream and cherry atop a very tasty sundae.

The five-year-old son of Kingman became the fourth Graded stakes winner from that group of 12, joining the likes of Newspaperofrecord , who triumphed in the 2018 Breeders' Cup Juvenile Fillies Turf, and Grade 1 winner Digital Age.

That's a pretty darn good haul on any continent.

"It's amazing the horses we got out of there," Brown said.

And while the others in that group that turned Brown into a regular customer at Tattersalls may have enjoyed their best days in the past, Brant's Serve The King is running better than ever.

The Red Smith came on the heels of a game second-place finish in the October 9 Joe Hirsch Turf Classic and provided the son of the Galileo mare Fallen In Love with his initial Graded stakes triumph.

"The [speed figures] for this horse are pretty good for a distance horse. He keeps getting faster," Brown said. "He's a progressive horse. A lot of credit goes to my Monmouth Park crew. They did a really nice job with him [this summer].

"As a young horse he was a bit quirky and didn't want to train all the time but for whatever reason down there he got in a comfortable situation and he would train on. After the Hirsch we left him here and he picked right up and has been cooperative and fine now. It was a team effort by the different divisions to keep him on track."

Brown expects Serve The King to race at six for Brant but was unsure of what's next for the horse bred in Great Britain by Normandie Stud. The four-time Eclipse Award-winning trainer ruled out the $1 million Pegasus World Cup Turf Invitational Stakes, saying it was probably too short at 1 1/8 miles.

The victory was the fifth in 11 starts for Serve The King and pushed his earnings to $406,180. He was purchased for Brant's White Birch Stable for 260,000gns from the Norris Bloodstock consignment at the European sale.

Calumet Farm's homebred Grade 1 winner Channel Cat set the pace in the Red Smith and the $1.4 million earner seemed in a nice spot as he enjoyed a two-length lead with a furlong to go after cruising through early fractions of 1:15.59 and 1:40.84 over firm turf.

Serve The King and jockey Irad Ortiz Jr. were never worse than fifth in the field of 10 but the 2-1 favourite had to swing six wide in the stretch and was still third at the eighth pole before he surged in the final sixteenth to prevail by a neck in 2:16.60 for the 11 furlongs.

"[Serve The King] had every right not to get there today, the way the race unfolded," said Brown, who also sent out eighth-place finisher Value Engineering. "He showed a lot of determination to get up in time."

It was a tough loss for Channel Cat, a son of the late English Channel whose lone win for trainer Jack Sisterson in his last 14 starts was a May victory in the Man o'War Stakes. He has placed in four Graded stakes during that stretch.

"He's a game horse. It's nice to get these horses that run their eyeballs out. We just got beat by the wire, but that's part of racing," jockey John Velazquez said about the 9-2 third choice. "They came to me at the quarter-pole and I had to use him a little sooner than I wanted to. I just got caught right at the end."

Grade 1-placed Soldier Rising, a three-year-old Frankel gelding, rallied sharply from last to take third. Owned by Madaket Stables, Michael Dubb, Morris Bailey, Wonder Stables, and Michael Caruso and trained by Christophe Clement, the 3-1 second choice was eighth with a furlong to go but missed out on the place spot by a neck in the final Graded turf stakes of the year for males in New York.

FIRST PUBLISHED 11:21AM, NOV 21 2021
As a young horse he was a bit quirky and didn't want to train all the time but for whatever reason down there he got in a comfortable situation