Tapwrit enters stud at Gainesway for a $12,500 fee 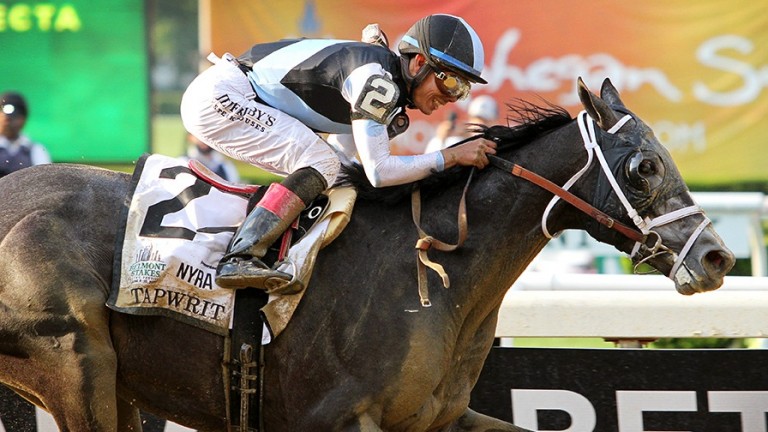 Classic winner and and millionaire Tapwrit has been retired from racing and will enter stud at Gainesway in Kentucky for a $12,500 stud fee in 2019.

At three, he set a new stakes record in the Grade 2 Tampa Bay Derby, winning by four and a half lengths. He then followed a troubled sixth-place finish in the Kentucky Derby with a two-length score in the Belmont Stakes.

Tapwrit's 103 Beyer Speed Figure is the second-highest figure for a Belmont winner in the last decade, behind only American Pharoah's 105.

"Tapwrit always showed a great deal of ability, but in the Belmont Stakes he demonstrated the class and competitiveness you need to win a Classic race," Pletcher said. "With his outstanding physical and pedigree, Tapwrit certainly has the credentials to be a top sire."

He is out of Spinaway Stakes winner and multiple Graded-stakes producer Appealing Zophie, who is also the dam of this year's Del Mar Derby winner Ride A Comet.

Eclipse president Aron Wellman said: "Tapwrit gave our partners one of the greatest highs a racehorse owner can have when he won the Belmont Stakes. Tapwrit remains the most expensive yearling Eclipse has ever acquired and formed a partnership for - a strong, well-made, beautiful yearling by champion sire Tapit out of a Grade 1-winning two-year-old. He rewarded our confidence in him, and I look forward to him rewarding breeders in his new career at stud."

Tapwrit is available for inspection at Gainesway from 1-2pm daily.

"We are excited to be standing a Classic-winning son of Tapit," said Gainesway president Antony Beck. "Physically, Tapwrit is as impressive of a stallion as you will find. He's going to have beautiful yearlings and make a tremendous sire."

FIRST PUBLISHED 1:59PM, OCT 2 2018
With his outstanding physical and pedigree, Tapwrit certainly has the credentials to be a top sire