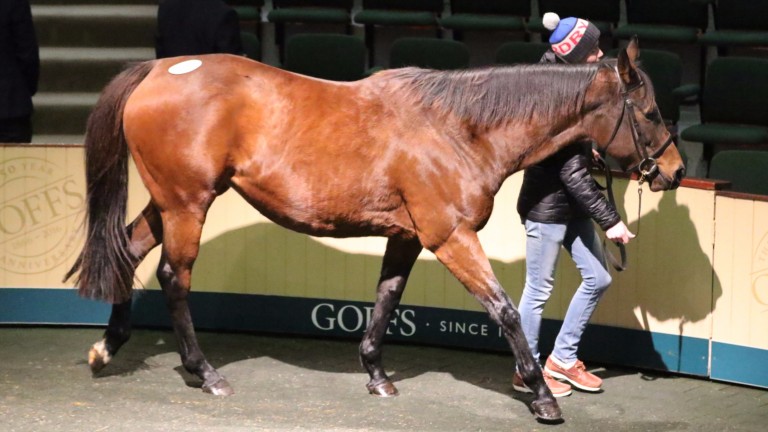 Little Sweetheart: made big money at Goffs when bought by BBA Ireland
Peter Mooney
1 of 1
By Aisling Crowe 1:49PM, NOV 21 2016

After the high drama and tension of Friday's dispersals, Saturday's second and final session of the Goffs November Breeding Stock sale was always going to be a more mellow affair.

However, it did provide sparks of life, in particular the sale of the top lot Little Sweetheart, who was knocked down to Eamonn Reilly of BBA Ireland for €135,000.

A daughter of Lawman out of Lady Gin, a stakes winner at two and three in America, she was consigned by Churchtown Hill Stud. The five-year-old won five races for trainer Pat Flynn and is a half-sister to black-type winner and producer Queen Amira.

Offered in foal to Star­spangledbanner, it was Little Sweetheart's third time to walk around the Goffs' sales ring - her first visit was as a yearling to the February Sale of 2012, when she was purchased by SackvilleDonald for €21,000. She returned for the Orby Sale that year when Flynn bought her for €22,000 from Taroaka Stud and four years later she rewarded Flynn with a huge return on his investment.

"She was the pick of the day for me," said Reilly (pictured). "She's a good, fast mare from a fast family and the cover by Starspangledbanner is a good one."

Reilly had been busy on Friday buying mares for Maurice Regan, owner and breeder of new Ballylinch Stud stallion Fascinating Rock, but Little Sweetheart was bought for a different client.

The draft from the Aga Khan Stud is always keenly anticipated as breeders attempt to buy into the wonderfully cultivated families and yesterday was no different as the mares and fillies clad in the green and red of the Aga Khan were enormously popular with bidders.

Baliyka, a winning daughter of Cape Cross, was the highlight of the draft, selling to Stroud Coleman Bloodstock on behalf of Gurav Rampal for €80,000.

The three-year-old is out of the Dalakhani mare Baliyana, who won the Group 3 1,000 Guineas Trial at Leopardstown and has already produced a filly by Shamardal who finished runner-up in that same race in Balansiya.

Rampal was not in a position to comment on Baliyka's future, but the agent, who bought Darkara, granddam of this year's champion three-year-old colt Almanzor, from the Aga Khan consignment at Goffs, did indicate that this filly was not bound for India.

Derrinstown Stud also offered a second consignment of fillies and mares yesterday and the star for them was Zakhrafa, a daughter of Shamardal bought by Rifa Mustang for €75,000.

Sold in foal to Caulfield Guineas winner Shooting To Win, who shuttled to Kildangan Stud for the 2016 breeding season, she won over seven furlongs as a three-year-old for trainer Kevin Prendergast.

Shamardal's burgeoning reputation as a broodmare sire was one of the attractions for Robert Roulston, the Australian agent who bought the four-year-old on behalf of the Chinese company Rifa Mustang.

"She will stay in Ireland and be bred here," Roulston confirmed. "I love Shamardal and I wanted to buy a mare by him. Shooting To Win is a gorgeous horse so I liked the cover.

The daughter of Group 3 Athasi Stakes winner Walayef, who is a sister to Haatef, was Roulston's second purchase of the week. He had also bought a Dark Angel filly foal from an Aga Khan family during Thursday's sale.

The Breeding Stock sale ended with big advances in key figures, thanks to the Wildenstein dispersal and popular consignments from Godolphin and the Aga Khan Studs.

Goffs chief executive Henry Beeby toasted the breeding-stock sale as "extraordinary" but recognised that poor returns in the preceding foal portion - at which only 67 per cent of lots were sold and the average dived by ten per cent - needed action.

"The foal sale clearance rate trends that we flagged 12 months ago were really quite stark and there will need to be some mature reflection as we head into the winter months," he said.

"We must work together as an industry to address such issues. Goffs stands ready to play its part as its fortunes are, of course, indelibly linked to those of the Irish breeder."

FIRST PUBLISHED 10:31PM, NOV 19 2016
Goffs stands ready to play its part as its fortunes are, of course, indelibly linked to those of the Irish breeder