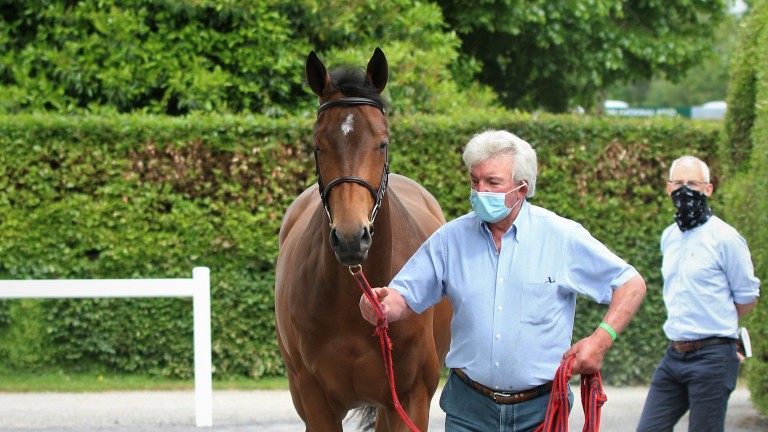 Highflyer's Anthony Bromley was among those to scrutinise the Land Rover offering
Goffs
1 of 1
By Tom Peacock UPDATED 11:31PM, JUN 7 2021

While sales companies have shown unprecedented versatility in maintaining business over the last few months, there is nothing quite like coming home.

This week's three-day Goffs Land Rover will be the first held in Ireland in 2021 with an attendance, including a party of British-based buyers, as some of the best National Hunt stores come to market.

"We haven't had a live sale since December so it's wonderful to be back and we've worked very closely with Horse Racing Ireland to ensure we're providing a safe and compliant environment," said Goffs group chief executive Henry Beeby.

"There's a select number of overseas, really English, buyers here; we're using the bubble that was used to take Irish connections to Cheltenham and Aintree and British connections to Punchestown and the Guineas meeting. We also used it in December to get our clients to the sales.

"They have to have a negative PCR test coming in, they can go only between the hotel and Goffs, and when they're indoors in Goffs there are specific areas for them to bid from."

Reopening is taking place slowly in Ireland, with the first owners permitted back on racetracks on Monday and the Derby meeting included as one of the pilot events later in the month.

Beeby said the experience would be largely similar to the sales that have been held in Doncaster and Newmarket lately.

"Thankfully Goffs is a decent size, it's easy to keep people isolated, and people are obviously looking at horses by keeping a safe distance," he said.

"We keep updating everything to make sure it's compliant with the latest government directives, but it's really around social distancing, mask-wearing and daily temperature checks, and we insist on pre-registration – people can't just turn up.

"I think the government here is taking a more cautious approach because the vaccination programme, although it is continuing at pace here, isn't quite as advanced as it is in the UK, and we would mirror that to make sure we're doing the right thing.

"We're being cautious, so we make sure we do it right. It's going to be largely an outdoor event, notwithstanding that the auctioneer will be indoors." 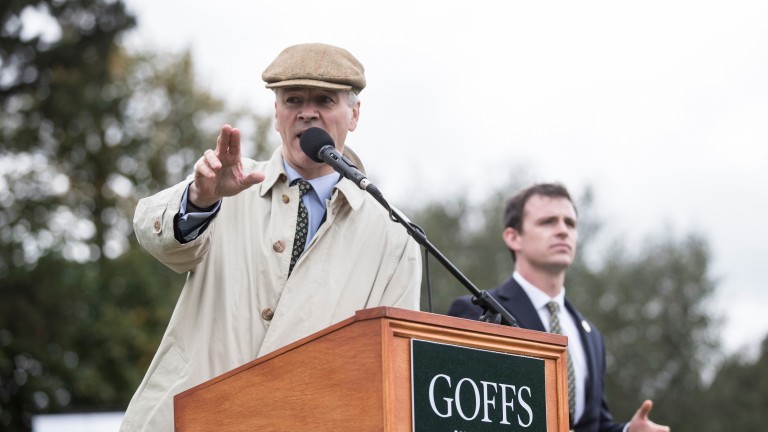 Last year's Land Rover, which was postponed for two months, saw figures dip, but trade – which included a €185,000 top lot – was considered satisfactory given the trying circumstances.

Sunshine over Kildare Paddocks was already enough to instil a little optimism into the mood of the organisers, allied with the reputation of an event that has been enhanced this year by Cheltenham Festival victories from graduates Put The Kettle On (Champion Chase), Flooring Porter (Stayers' Hurdle), Vanillier (Albert Bartlett) and Sir Gerhard (Champion Bumper).

"We're hopeful, although you're never quite sure," Beeby said. "What I would say without fear of contradiction from anybody, and I think if you asked the people looking at them, is that this is the best bunch of horses the vendors have ever sent us, so we're extremely grateful.

"The sale has done very well in recent years, that's been reflected by the increased support we've had from everyone, and that's why we've been able to extend Part 1 into two days without any dilution of quality at all. We've also been encouraged by the superb trade at Doncaster."

Several of the aforementioned names appear again in the catalogue. A & N Bloodstock offers one of the first into the ring in a Fulbright brother to Sir Gerhard (lot 9), who was bred by the late Jonathan Fitzpatrick, while Put The Kettle On's breeders Butlersgrove Stud bring her half-sister by Valirann (132).

Heavyweight sires are well represented, with more than 30 by the potent market mover Walk In The Park.

Among them are Manister House's gelding out of a half-sister to the great Faugheen (123), another out of a sibling to his fellow Champion Hurdle hero Rock On Ruby from Oak Tree Farm (316), Rathkenty Stud's gelding out of Cheltenham Gold Cup winner Minella Indo's half-sister Carrigeen Lonicera (381), and half-brothers to top chasers Monalee (249) and Invitation Only (137).

Among numerous National Hunt fillies of interest are Charel Park Stud's Saint Des Saints half-sister to Appreciate It (197), who appeared a force of nature when running away with the Supreme Novices' Hurdle, and potential blue-chip racing and breeding prospects by the likes of Kayf Tara and Presenting.

FIRST PUBLISHED 3:09PM, JUN 7 2021
It's going to be largely an outdoor event, notwithstanding that the auctioneer will be indoors