At The Sales VENDOR PROFILE

Michele MacDonald speaks to one of the leading players at Saratoga 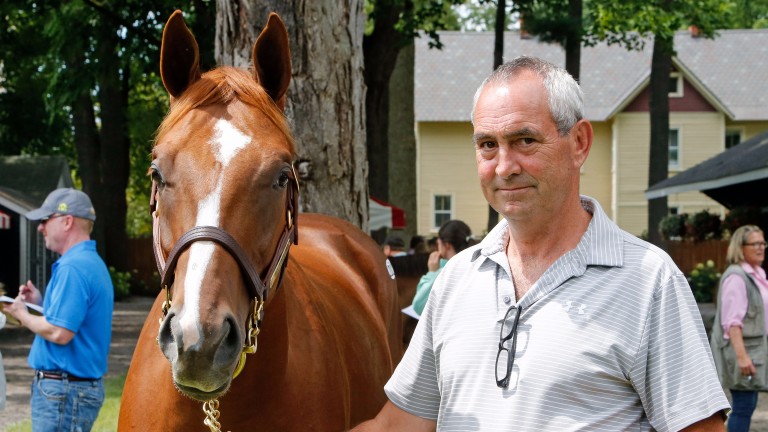 Just as with investments in other fields, shrewd participants in bloodstock markets tend to play all angles, and in this week's Fasig-Tipton Saratoga selected yearling sale, Irish native Gabriel Duignan is doing just that as a breeder, pinhooker, farm owner who provides sale prep services and founding partner in Paramount Sales.

“I do a little bit of everything,” Duignan said in between overseeing yearling shows at Paramount’s busy Barn 1, where sons of Uncle Mo, Curlin and Into Mischief and fillies by War Front, Malibu Moon and Union Rags were generating a steady stream of traffic.

“We have quite a few mares with a few select partners. Breeding is a big part of my business and then we pinhook some and we have Paramount. So, we do it all,” he said.

Even though he has been based in Kentucky since arriving from Ireland as a working student in 1985, Duignan maintains his Irish connections and relates that some of his partners in horses are Irish, although he prefers not to identify them.

Even before Paramount was established in 2001, Duignan and co-founder Pat Costello pinhooked under the name The Lads for a decade, frequently taking on other investors.

Duignan also served as the first president of Castleton Lyons in Lexington after the historic property was purchased by the late Dr Tony Ryan, and he oversaw the refurbishment of the property and establishment of the stallion business that featured eventual top sire Malibu Moon. His connections are extensive and he is married to Aisling Cross Duignan, director of sales for Coolmore’s Ashford Stud.

With that background and experience, Duignan emphasises that it takes a special horse to succeed at the Saratoga sale, where the boutique catalogue of about 200 lots will showcase good horses with excellent physicals.

“It’s a great place to sell a horse, but you have to bring the right horse,” Duignan said. “They probably have to withstand more scrutiny than at other sales because people have a lot of time on their hands. But if you make the final list, you can get very well paid here.”

Paramount has ten yearlings in this year’s catalogue and four of those are either co-bred by Duignan with partners or acquired under the name of his Springhouse Farm as weanlings.

Leading the way is Hip 202, a striking chestnut Curlin colt with four white legs and a blaze who Duignan purchased as a weanling at the 2016 Keeneland November sale for $310,000, a sizeable price for a pinhook.

“He’s a beautiful colt, a lot like his dad, I think. Very straightforward colt, always has been, and very athletic,” Duignan said of the half-brother to two stakes winners from the family of French Group 1 winner Fitnah. “I hope whoever buys him will be like me and pay more than they intended to because they have to have him. And I think he is that type of horse.”

Duignan’s other pinhook is Hip 18, an Uncle Mo colt who is the first foal out of the War Front mare Mother Of Swords. Springhouse was listed as the buyer of the colt at the Keeneland November sale on a bid of $160,000.

“He’s athletic and smooth and he seems to be going over really well,” Duignan said of the robust bay.

Although not in the Paramount consignment, an Uncle Mo filly who is a half-sister to four stakes performers will be offered as Hip 166; Duignan is listed as co-breeder with the Petaluma Bloodstock of Ashford’s Charlie O’Connor, Crosshaven Bloodstock and Circular Road Breeders.

“She’s a very nice filly,” Duignan said, indicating that another Irish native, Gerry Dilger of consignor Dromoland Farm, is among the co-breeders. “When we take them up here to Saratoga, they have to be nice horses. They have to jump through all the hoops.”

Other Saratoga yearlings connected to Duignan include Hip 172, a Malibu Moon filly he co-bred with Crosshaven Bloodstock, and Hip 17, an Into Mischief colt from the family of Ascot Gold Cup and Prix Royal-Oak winner Indian Queen that he co-bred with Irish-based Pier House Stud. The Into Mischief colt was offered as a weanling at Keeneland but was listed as not sold at $170,000.

Duignan said he maintains around 70 mares at Springhouse and annually preps about 40 yearlings for sale. His clients include Oklahoma-based CresRan Farm, which has been with him since he started his own full-service business in 2003 under the banner of Foxtale Farm.

Looking ahead, Duignan and his partners and clients will be back at the Keeneland September yearling sale with more yearlings they bred or pinhooked.

“Pat Costello is my partner in this, along with Ted Campion [of Dundrum Farm] and Adrian Regan of Hunter Valley Farm. We have a partnership and we’ve pinhooked for years together,” he said.

Duignan is a co-breeder of Grade 1 winner Brody’s Cause, a son of Giant’s Causeway now at stud at Spendthrift Farm. As both a pinhooker and breeder, Duignan said he tries to keep quality as his top priority.

“Pedigree is important, and you try to read the market about what is going to be hot the next year. Sometimes you get it right and sometimes you get it wrong,” he said. “I always prefer to own half, a third or even a quarter of a good horse rather than all of a lesser horse because the market is quite polarised anymore - it’s all about quality.”

Read our preview of the Fasig-Tipton Saratoga Yearling Sale