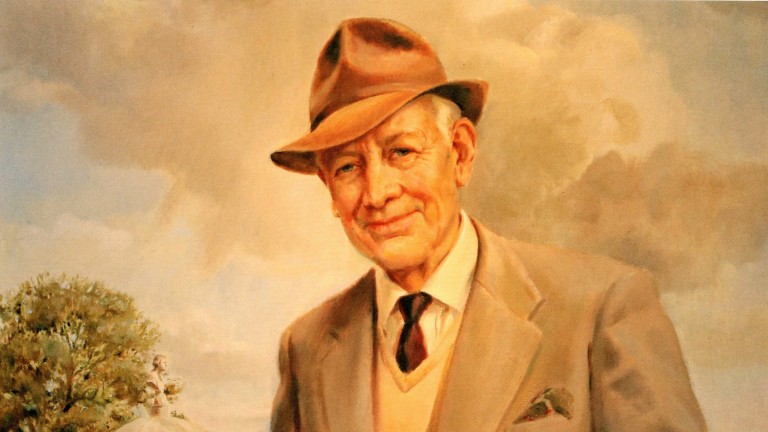 Kenneth Watt: was suddenly plunged into the role of heading the operation
1 of 1
UPDATED 6:50PM, FEB 6 2018

Somerville Tattersall was the sixth and last of his line to run the family firm. A lifelong bachelor, he made his unscheduled debut on the rostrum when his father lost his voice at the 1885 July Sales in Newmarket, assumed the reins of power in 1898, and remained the chief auctioneer – at Knightsbridge, Glasgow Paddocks in Doncaster, and Park Paddocks in Newmarket – until December 1936. Ill health dogged him after that, and he died in October 1942.

Eleven years after Sceptre’s record-breaking 10,000gns sale as a yearling in 1900, the mare came under the auctioneer’s hammer again at the July sales in Newmarket. Well aware that there was foreign interest in the four-time classic heroine, Sommy prefaced her sale with the remark that he would regard it as unpatriotic if English breeders were to let her go abroad. Sceptre was bound for France when the bidding stalled at the 6,800gns offered by Baron Maurice de Rothschild, but having convinced himself that there would be no advance, Sommy brought down the hammer and announced her sale to Messrs Tattersall for 7,000gns – a classic example of putting one’s money where one’s mouth was.

Sommy would never have expected to oversee a dispersal sale to match that of the 1st Duke of Westminster, which featured the record prices for Sceptre and Flying Fox, but the death of newspaper magnate Sir Edward Hulton in May 1925 resulted in something just as sensational. At that year’s second July sale a total of 77 lots in the Hulton draft realised 288,380gns. Fifinella, winner of both the Derby and the Oaks in 1916, realised 12,000gns, and she was just the third highest-priced mare, after 1924 Oaks heroine Straitlace (a record 17,000gns) and dual 1922 classic runner-up Soubriquet (12,500gns). Three-year-old Oojah, third in the 2000 Guineas, was the top horse in training at 13,500gns.

It was axiomatic that dead men’s horses always sold well, and when there were assets of genuine quality that executors needed to realise, auctions could stimulate spectacular bidding. Another such example came in 1932, when the death of Sir John Rutherford meant that his stallion Solario, winner of the St Leger, the Coronation Cup and the Gold Cup, and already a successful sire, had a date with Tattersalls in the second July sale.

Global economies were in recession, but it was inconceivable that Solario would fail to fetch a record price. A new phenomenon had arrived in the business in the form of syndicated ownership, and it seemed likely that the horse would be bought by a group rather than a lone individual. Sure enough, it was a syndicate that prevailed at 47,000gns, the only surprise being that an English group, headed by Lord Glanely, was able to defeat US forces led by Kentucky breeder Arthur Boyd Hancock.

Of course, Tattersalls had long proved a rich source of quality bloodstock for American clients, the most notable single example during Sommy’s tenure of office being the purchase at the 1930 December Sales of La Troienne for Edward Riley Bradley’s Idle Hour Farm. Four years old and without a win to her name, she was knocked down for only 1,250gns, but turned out to be the most successful broodmare ever imported to the States, founding a family that thrived at the top level over several generations, remaining active into the 21st century.

Gerald Deane, active on the rostrum as early as 1904 and taken into partnership after World War I, became head of the firm on Sommy’s death, with Australian Bob Needham as his right-hand man. But Deane’s frequent bouts of ill-health and Needham’s sudden death in 1947 provoked a crisis which threatened to render Tattersalls a ship without a rudder. The inexperienced Kenneth Watt, a paid employee of the firm for less than two years, was suddenly plunged into the daunting role of heading the world-famous concern during the dark days of post-war austerity.

But the omens were not all bad. Racing, like all other major sports, was enjoying a boom period, the nation relishing the chance to revel in the leisure pursuits that had been denied during the war. And the bloodstock market was holding up rather well, considering the adverse conditions in everyday life. There had even been a record price for a yearling in 1945, admittedly bought by foreign money, but there were home buyers for quality products, and there were signs that Americans were keen to re-stock from Europe.

Ken Watt was to witness substantial growth in transatlantic business at Tattersalls over the years. The American focus was chiefly on obtaining stallions by private contract in the early post-war years, but they soon came to feature strongly in the mare and filly departments at the December Sales, and their acquisitions did not all figure at the top of the market. Two of the best, secured for Claiborne Farm in 1951, were Rough Shod, whose only win from seven starts had come in modest company at Bogside, and Knight’s Daughter, who had been useful at two and failed to train on. At 6,000gns the pair, they proved tremendous bargains. The former bred four major stakes winners and founded an exceptional family; the latter produced the outstanding runner and sire, Round Table.

The most consequential transaction at the 1952 December Sales proved a triumph for Canada’s top breeder, Eddie Taylor. He told his agent, George Blackwell, to buy the best mare in the catalogue, and was content with the identification of Lady Angela, a daughter of Hyperion carrying to Nearco. Blackwell could bid whatever was necessary, but he was also charged with the task of obtaining a repeat nomination to Nearco for the following spring. The agent secured the mare easily enough for 10,500gns, but it proved more difficult to accomplish the second part of the commission. The deal was eventually done, with immense consequences for the breed; the foal inside her at sale-time turned out to be a modest performer, but the repeat mating of Lady Angela and Nearco resulted in Nearctic, the sire of Northern Dancer.

Americans were major players at the first two significant dispersal sales of the post-war era at the December Sales – the 1954 occasion featuring the late John Arthur Dewar’s highly-bred stock, and that of 1964, when the National Stud, about to re-invented as a stallion station, submitted its similarly blue-blooded mares and foals.

Ken Watt took a leaf out of Sommy Tattersall’s book when he expressed the hope, prior to the sale of the Dewar draft, that the choicest items would be retained for service in British studs, and his call was answered in several notable instances. American breeder Florence Graham, perhaps more readily recognised as fragrance queen Elizabeth Arden, tempted providence by having her photograph taken with that year’s 1000 Guineas heroine Festoon on the day before her sale and telling reporters: “She’s mine.” As it turned out, she wound up as underbidder at 36,000gns to Sussex breeder Tony Askew, whose brother Gerald had secured the filly’s half-sister Refreshed a few minutes earlier for 30,000gns.

Though frustrated over the top lots, Americans departed with many of the presumed lesser lights, and their presence in Park Paddocks was a major factor in Tattersalls being able to register a December aggregate in excess of 1,000,000gns for the first time.

There was no total in seven figures again until 1964, when the National Stud offerings – 19 mares and 11 foals – accounted for rather more than a quarter of the takings. As in 1954, there was a classic winner in the featured draft, but Carrozza, who had carried the Queen’s colours to victory in the 1957 Oaks, realised no more than 20,000gns to rank only third-best of the consignment. She was bought for America, as was the week’s star mare Chandelier, dam of juvenile champion Crocket. She came from Dooneen Stud, fetching a broodmare record 37,000gns.

The 1964 December Sales was the last to take place in the draughty outdated arena, largely exposed to the elements. A plush new pavilion would rise in its stead, and the records set in the old ring would soon seem small beer.