Studs, sires and Guinness stew: on the road for the Irish Stallion Trail 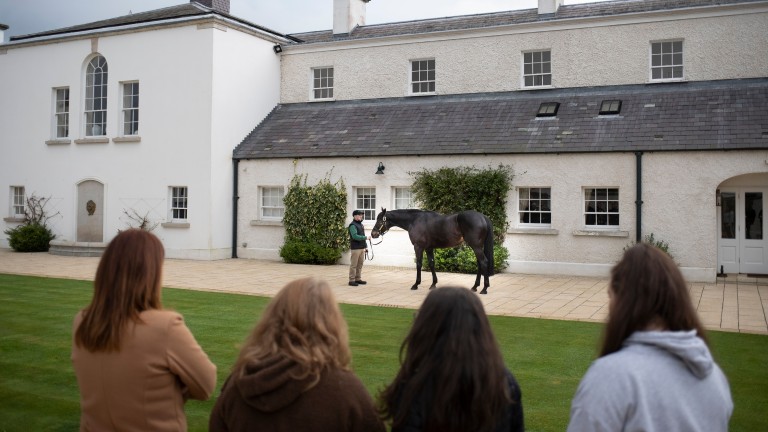 Last weekend hosted the annual pilgrimage of bloodstock aficionados and racing fans, as 28 of Ireland's finest studs - from Anngrove to Yeomanstown - threw open their doors for the fifth edition of the Irish Thoroughbred Marketing Irish Stallion Trail.

Friday began for the Racing Post team with a visit to Clongiffen Stud, which is home to My Dream Boat and two new recruits for the upcoming season in Smooth Daddy, a strong-looking son of sire sensation Scat Daddy, and Kuroshio, who has already left stakes performers Dunkerron, Daphinia and Kurious from a small, solitary crop bred at Overbury Stud.

If the latter-named proves as adept at siring winners as he is at overcoming jet lag, with an exuberant display giving no indication that he only recently shuttled back from Darley Australia, Irish breeders will have a serious ally in this strapping son of emerging sire of sires Exceed And Excel. 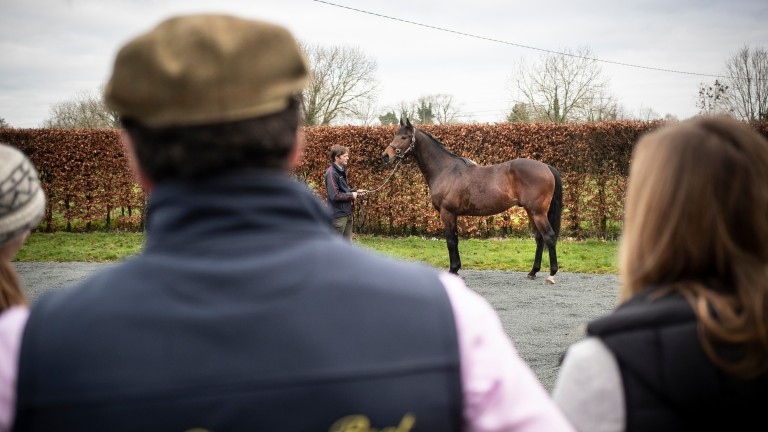 My Dream Boat stands for visitors at Clongiffen Stud
Patrick McCann
After a short drive the journey continued at the Flood family's Boardsmill Stud, where leading amateur rider Jamie Codd was getting acquainted with Kalanisi, the spritely 23-year-old responsible for, among others, Malone Road and Fayonagh, who must surely rank as the best two bumper horses Codd has ever thrown his leg over.

The stud is also home to the popular Mount Nelson, as well as Califet and Court Cave, who, judging by social media, spent most of the weekend with his head over his stable door sticking his tongue out at passers by.

From there the trail led to Michael Hickey's Sunnyhill Stud, where recent import Casamento looked in fine form ahead of what is likely to be a busy covering season. A similar future surely awaits studmate Doyen, who hit the headlines as the sire of recent Grade 1 novice hurdle winner Battleoverdoyen. 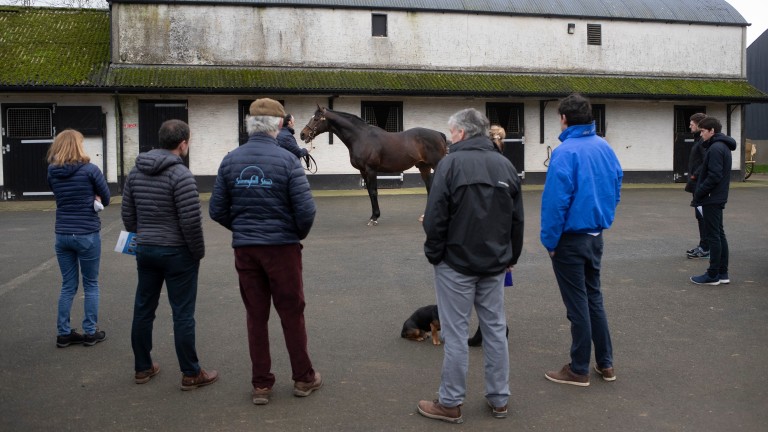 Michael Hickey gives guests the lowdown on Sunnyhill Stud star Doyen
Patrick McCann
That pair are joined by Lucky Speed, a son of Silvano and an interesting prospect whose first crop turned two this year.

"We really like this horse," Hickey said of the German Derby winner. "And yes, I know that's a phrase usually reserved for trainers."

Given that the likes of Kicking King and Kalashnikov were bred at this homely tract of County Kildare, it is almost certainly worth taking note of Hickey's appraisal.

Nearby is one of the must-see stops on the trail, the Aga Khan's Gilltown Stud, with the driveway alone offering stunning vistas across manicured, verdant land. If you have ever imagined equine heaven, it ought to look something like Gilltown.

The palatial surroundings, complete with a statue of Shergar, are befitting of royalty, and with Sea The Stars and his son Harzand on show, that is precisely what Gilltown served up.

None are better qualified to speak on the qualities that dual Derby winner Harzand possesses than his former jockey Pat Smullen and handler Dermot Weld, and on Friday the pair were on hand to explain to captivated onlookers just how tough and talented the horse was.

Visitors will have been left in no doubt about Weld's belief in Harzand, as the master trainer confirmed he would be sending his own mares to the horse again this season. 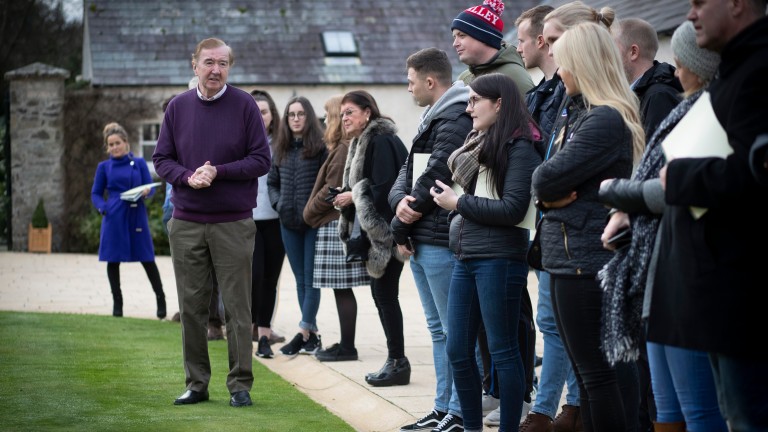 Dermot Weld speaks with visitors to Gilltown Stud
Patrick McCann
As if all that wasn't enough, guests could refuel with a Guinness stew that would put plenty of swanky restaurants to shame, while reminiscing over replays of Sea The Stars' and Harzand's combined total of eight Group 1 wins.

Over at Rathasker Stud, Maurice Burns was quick to explain how the farm's promotional material had failed to keep pace with the volume of winners supplied by breakthrough sire Bungle Inthejungle.

"He'd had 27 winners when we got these made up but he just keeps firing them in so we've had to make our own updates," said Burns proudly as he gestured towards the placard - complete with a makeshift '28' - detailing Bungle's impressive achievements to date.

Bungle Inthejungle was joined by freshman sire Anjaal, a strapping son of Bahamian Bounty who is set to be represented by around 140 two-year-olds this coming Turf season. Given that he boasts a similar profile to Bungle Inthejungle - and not to mention that his juveniles are in the yards of trainers like Karl Burke, Clive Cox, Richard Fahey and Hugo Palmer - Anjaal has every chance of following in his neighbour's footsteps.

A short drive away is Yeomanstown Stud, where a sizeable crowd gathered to watch the white wonder Dark Angel strut his stuff as the sire of seven elite winners - including Battaash, Harry Angel and Mecca's Angel - cut a ghostly figure against the rust-coloured hedgerow. 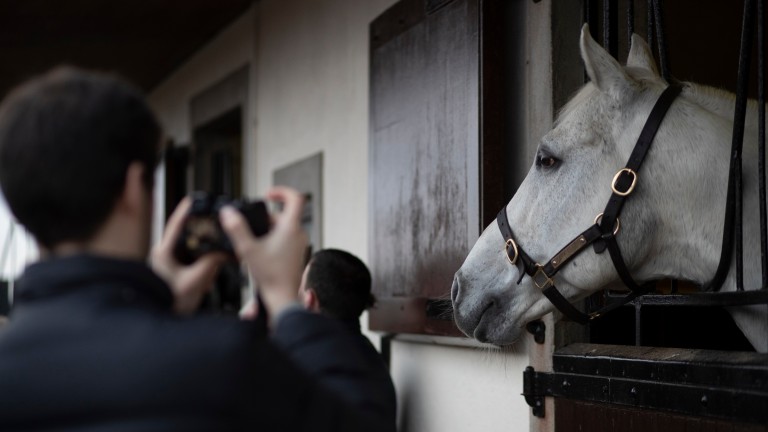 Dark Angel shows a fan his best side at Yeomanstown Stud
Patrick McCann
Not all stallions on the trail seemed intent on making friends with each and every visitor, but the same cannot be said of Camacho, who peered over his stable door when not on parade to lap up the attention and obligingly pose for photos.

With a powerful roster of stallions to manage - with El Kabeir and Gutaifan also on show - foaling season about to hit top gear, and a squad of breeze-up horses to prepare, there is plenty to keep the Yeomanstown team busy. But Robert O'Callaghan reported they were only too happy to welcome the public in.

"Last year was very busy and this year has been even busier," he said. "It's been like a busy day at the sales as the horses have been out of their boxes all day showing. It's great to get everyone in, we've had a mixture of general public as well as breeders and the professionals - it's great that they can all come and see the horses."

The trail resumed on Saturday with a journey down the M9 to the Kinsella family's Knockhouse Stud. The route down from Naas veered wildly off the beaten track as our destination approached, but just when Google Maps was on the receiving end of some unrepeatable insults, Knockhouse loomed out of the County Kilkenny countryside.

However, the schlep from Kildare pales in comparison to the route that the stud's latest recruit Workforce has taken, having arrived at Knockhouse from a Derby and Prix de l'Arc de Triomphe-winning three-year-old season via a five-year stint at the Shadai Stallion Station. 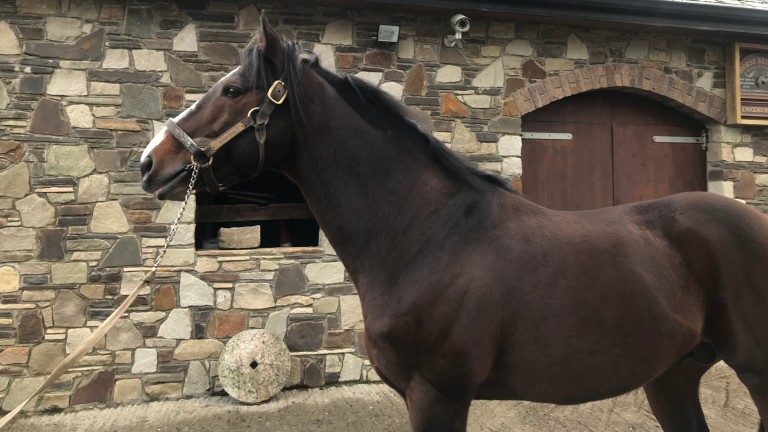 Workforce surveys the scene at Knockhouse Stud
James Thomas
The imposing son of King's Best, who has his first Irish-bred yearlings on the ground, was joined by Dante winner Libertarian, whose debut crop of two-year-olds have been pleasing some notable National Hunt judges according to Sean Kinsella, who also showed off September Storm, Prince Flori and the redoubtable Notnowcato with a quiet charm.

Having navigated a traffic jam in Mullinavat - caused by the local hunt commandeering the narrow country road - the next stop was Michael Shefflin's Annshoon Stud. The current stallion roster may not offer the numbers of some studs on the trail, but few can boast a horse as well-bred as Proconsul, with the full-brother to none other than Frankel having settled in well after a recent switch from Mickley Stud in Shropshire.

The penultimate stop off for the Racing Post team was Victor Connolly's Burgage Stud, a picturesque property with blood-red stable doors and whitewashed walls.

The farm's leading light Shantou was out in his paddock enjoying a crisp winter afternoon, as much grass as he could stomach and the occasional roll in the mud. Having already sired talents such as Briar Hill, Death Duty, Morning Assembly and The Storyteller, the 26-year-old has more than earned the right to keep minding his own business on days such as this.

While Shantou may now be entering the twilight of his stud career, another of the stud's residents, Jukebox Jury, is only just starting out. The rangy grey strode purposefully along the walkway leading to Shantou's paddock, as Connolly explained how the horse's early results from Gestut Etzean - including Triumph Hurdle winner Farclas - gave him great hope for his upcoming Irish-bred crops. 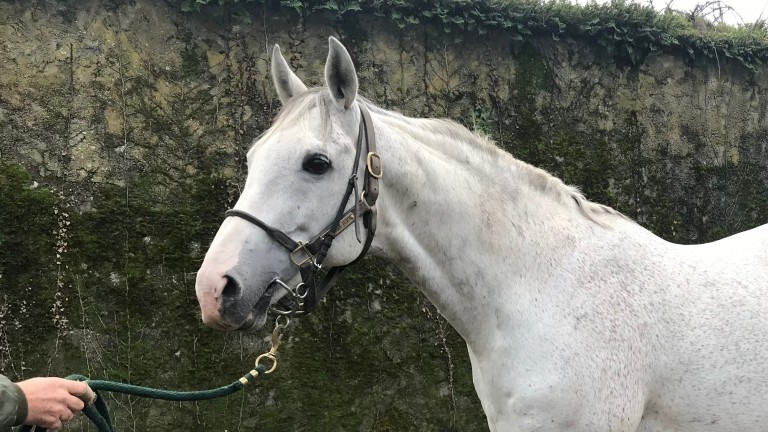 Jukebox Jury: the dashing grey looks to have a bright future ahead of him
James Thomas
There was, however, a timely reminder of who's the boss of Burgage later that afternoon, when Shantou was represented by cosy Fairyhouse bumper winner Run Wild Fred.

The trail concluded at Ballylinch Stud, a sprawling wonderland of a farm that tastefully showcases the historic and the modern side of thoroughbred breeding.

There is the ornate, mosaic-tiled box that once belonged to stud's foundation stallion, The Tetrarch, whose grave - which has been occupied since 1935 - is just a few strides away from his old stable door.

The grandiose stable, which is now over a century old, is home to current stud stalwart Beat Hollow, who looked in rude health ahead of his 17th consecutive covering season.

Up an unassuming path sits the operation's stallion facility. The sleek new barn is home to the mighty Lope De Vega, who has quickly established himself as a sire of global significance. His rapid start at stud was consolidated last November when Newspaperofrecord maintained her unbeaten record with a remorseless display of galloping to land the Breeders' Cup Juvenile Fillies Turf.

That filly's breeder, Allan Belshaw, and Roger Varian, trainer of Lope De Vega's first-crop star Belardo, were among those to cast their expert eyes over Ballylinch's roster of stallions, which also includes Fascinating Rock, New Bay and Make Believe, whose first two-year-olds could just be the surprise package of the year.

But, as Ballylinch's managing director John O'Connor noted, the trail is not just about industry professionals. "It's a way for the stallion industry to give something back to the wider industry, be that breeders or fans," he said. "It also allows the racing fan to come and see the horses they followed when they were racing."

With that kind of offer on the table, it would be rude not to pencil next year's Stallion Trail in right away.

FIRST PUBLISHED 7:46PM, JAN 13 2019
If you have ever imagined equine heaven, it ought to look something like Gilltown