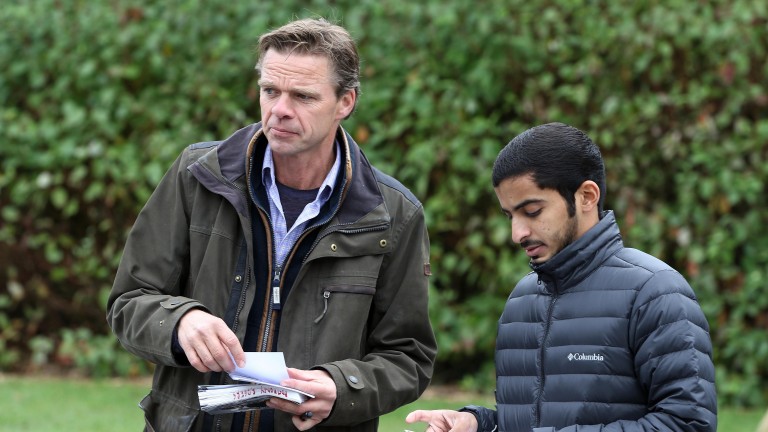 The bloodstock world is today more than ever an arena of quick turnover where decisions are made with a commercial emphasis. But the virtues of patience and thoughtful cultivation thankfully remain coveted in several establishments, many of whom unsurprisingly remain forerunners of their trade.

Most buyers viewing Airlie Stud’s draft at the Goffs Orby Sale this week will need little introduction to the pedigrees on offer, with the majority of the group made up of yearlings descending from lines cultivated by the Rogers family over a series of generations. It is an approach that has required real patience but in return, it remains a key element to their success, having led in recent years to the likes of Bachelor Duke, Kingsfort, Intense Focus and of course Skitter Scatter, one of the great success stories of the current season.

“We’ve brought in several newer families to the stud but a lot of them have been with us a long time,” says Anthony Rogers. “Certain families come under the radar and then we will look at foals, yearlings and mares from that family when they come up for sale – we look at everything to get a feel for it before we buy, to see what works best.

“If you look at the Kingsfort family, my mother [Sonia] had been trying to buy into that family for 15 years. We finally bought Princess Kris, who bred [Grade 1 winner] Prince Arch and then [National Stakes winner] Kingsfort. And now we have a daughter, Prince Arch’s sister Arty Crafty, who is the dam of Pincheck. So it can take a while.”

Three years ago at Goffs, Pincheck was the star of the Airlie draft when selling to Anglia Bloodstock for €370,000 on behalf of American owner Jon Kelly. Now with Jessica Harrington, the son of Invincible Spirit was a ready winner of the Desmond Stakes at Leopardstown before running third in the Boomerang Stakes.

The stud returns with 13 yearlings this time around, ranging from those by the anticipated young sires Golden Horn and Free Eagle to proven names such as Siyouni, Le Havre and Mastercraftsman. And among them are the chances to tap into noted Airlie families such as Fair Of The Furze, Bold Example, Sweet Simone and Alruccaba.

Alruccaba’s increasingly powerful dynasty – represented at Airlie this week by a son of the upwardly mobile Sea The Moon (168) out of All Hallows – was originally developed by Sonia Rogers in partnership with Kirsten Rausing. However, another two of those families – Bold Example and Fair Of The Furze – descend from the era of Captain Tim Rogers, widely regarded as a pioneer in the stallion and stud farm business. 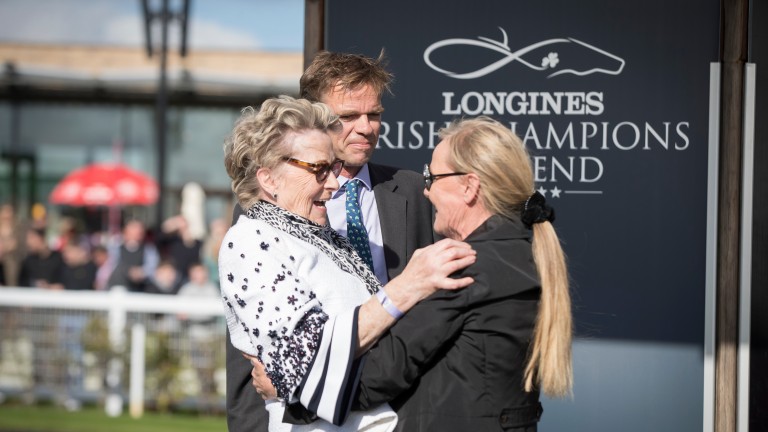 Rogers syndicated his first stallion, the Hyperion horse Ommeyad, to stand at Airlie in late 1958 and from there, went on to develop the stud into one of the biggest operations of its kind worldwide. At one time, the Airlie brand comprised seven farms worldwide and a legion of stallions that included both Habitat and Petingo, the sire of Troy during his short innings at stud.

The stud steadily moved away from standing stallions following Rogers’ death in 1984 but the tradition of breeding top-class horses has not diminished, as Classic winners Bachelor Duke, Petrushka and Margarula attest. Some would also say that it is unlucky not to boast an Arc winner in White Muzzle, that fast-finishing second under John Reid to Urban Sea in 1993. The Dancing Brave colt was bred by the stud out of Fair Of The Furze, who appears as the granddam of two fillies at Goffs this week in lots 264, by Australia, and 289, by Showcasing.

“When my father died, there were 17 stallions, around 160 mares and seven farms, including one in America and one in New Zealand,” says Rogers. “Micky Rogers, a very good trainer, was very helpful at the time in assessing the stock and bringing it to a smaller size. At the time, Fair Of The Furze was a two-year-old and a big, plain filly. Micky stuck a bridle on her and when he lunged her, was impressed with how she moved."

Rogers had had plenty of good horses through his hands, notably the 1964 Derby winner Santa Claus, and the trainer's positive assessment of Fair Of The Furze duly proved spot on. Sent to Liam Browne, she became an early important flag-bearer for her Airlie-based sire Ela-Mana-Mou by winning the Tattersalls Rogers Gold Cup before foaling the Listed winner Elfaslah (herself dam of Dubai World Cup winner Almutawakel) in addition to White Muzzle.

Both granddaughters catalogued this week are out of Docksider sisters; lot 264 is out of Donnelly’s Hollow, whose three-year-old Exec Chef has won his last three starts for Jim Boyle, while lot 289 is out of Fair Sailing, already the dam of black-type performers Windfast and Montalcino.

Also well represented in the draft is the family of Bold Example, the granddam of Zilzal and Polish Precedent who was bought by Captain Rogers during the late 1970s.

“I remember Bold Example had about eight colts in a row and we were desperate for a filly,” says Rogers. “We sent her to Northern Baby – we had a share – and got For Example, who then bred Viz.”

Listed winner Viz, by Darshaan, has a “cracking” Siyouni colt (lot 146) while her daughter Swizzle Stick is the dam of a Slade Power colt (117).

“Swizzle Stick is a Sadler’s Wells – that was the most we’ve ever spent on a nomination and then Swizzle Stick had an injury and couldn’t run,” says Rogers.

“Her Sea The Stars colt, Fifty Stars, is a good colt in Australia. Remarkably, he’s been winning over six and seven furlongs. He ran well when second off a break only on Friday and I believe he’s going for a Group 1 next.”

Meanwhile, Group 1 updates have already come the way of the Dark Angel half-brother to Intense Focus, who is out of Daneleta (254), and the Le Havre filly out of The Fairy (126). While the Dark Angel colt is also a half-brother to Dane Street, the dam of Moyglare Stud Stakes heroine Skitter Scatter, the Le Havre filly is out of a half-sister to another Airlie-bred Moyglare winner in Chelsea Rose, herself dam of Kew Gardens.

Hopes also remain high that homebred Magnolia Springs, out of Rainbow City and successful in this year’s Height Of Fashion Stakes, can build on her productive career. Her War Command half-sister is catalogued as lot 47.

“It’s the Ballymacoll family of Edinburgh and Greektown, one that we’d tried to get hold of for years before we bought Rainbow City,” says Rogers. “Magnolia Springs came back to us after her last race [when unplaced at Goodwood in August] and she wasn’t quite right. But she stays in training next year.

“War Command is having a good run and this is a racy filly who looks sharp.”

He adds: “The Alidiva family was another one we had looked at getting into for a long time. We did buy Sometime, the dam of It’s Somewhat, but sadly never managed to get her in foal. But we’ve since bought Stealth Bolt [a granddaughter of Sleepytime] and we have her Mastercraftsman colt to sell this week [as lot 103].”

The draft also includes a Golden Horn filly out of Airlie’s Park Hill Stakes heroine Discreet Brief (262), whose quartet of stakes runners includes Royal Lodge Stakes winner Steeler, and a Kingman grandson of the high-class Stunning (51). Free Eagle is also the sire of a colt out of Classic Remark, herself a product of Hesmond Stud’s Galaxie Dust family (229).

“We took a share in Free Eagle,” says Rogers. “He’s a tidy horse and this is a big family, and the cross seems to have worked with this colt – he’s straightforward and a nice easy mover.” 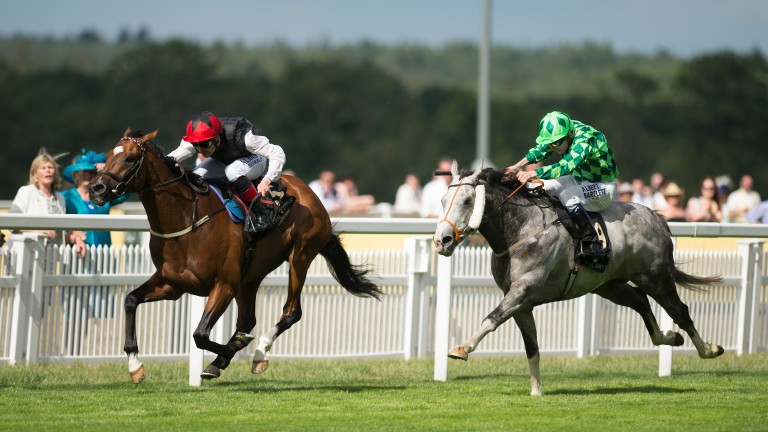 An Acclamation filly out of Game Of Legs rounds off the consignment as lot 306.

Airlie enjoyed a good Orby Sale in 2017 as the vendor of €1.052 million worth of stock and with the pedigree power at their disposal this year, another bold showing is seemingly on the cards.

But in keeping with a number of other breeders, Rogers has concerns regarding the overall health of the market.

“The bottom is tough, no doubt about it,” he says. “It comes down to prize-money. When you see countries like America and Australia running for so much more, it gives everyone a better chance.

“We had a good filly here called The Tulip, who earned about £15,000. I sent her to Paddy Gallagher in the US, where she won two races and about $125,000. It’s sad to see so many good horses go abroad but with the economics of it, it’s not surprising.

“But the wonderful thing about the sport now is that it is so international. You can watch a horse that you bred running in America or Australia, and it’s lovely. It’s also very good for the brand.”

With Skitter Scatter earning recognition as among the best of her generation, not to mention the prospect of this year’s crop of yearlings taking their turn in the ring, it has to be said that the Airlie brand is certainly in a good place.

Scat the daddy as daughter flies the Airlie flag

From the final crop of Scat Daddy, Skitter Scatter would have undoubtedly been a welcome addition to any yearling sale, especially as a close relation to Dewhurst Stakes winner Intense Focus. However, as luck would have it, her defection from Airlie’s auction squad of 2017 due to a vet issue means the stud is now in possession of one of the top juvenile fillies in Europe.

“When we used Scat Daddy, we knew he was a good sire, we just didn’t realise he was quite that good,” says Anthony Rogers. “You can’t dream that she would do what she did. Patrick Prendergast did say early on that he thought she had an engine and then she improved with racing every time.

“She runs in my great-grandfather’s colours – they’ve been around a long time and it’s good to see them. There was a stage when we thought they were unlucky but you have to say they’ve come back with a bang this year.” 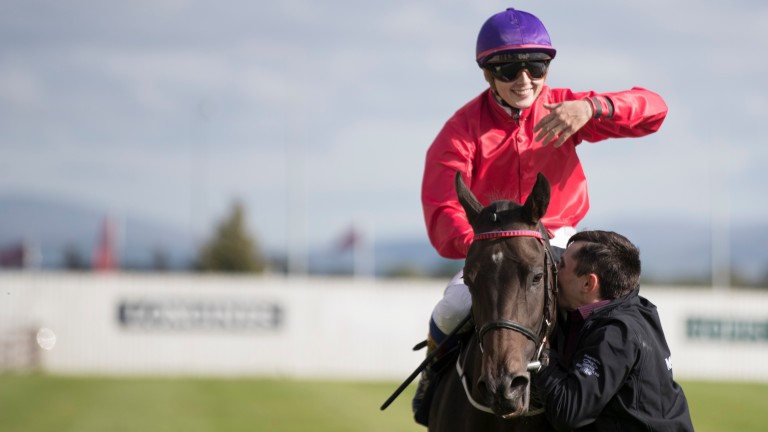 A tough filly, Skitter Scatter had the measure of Sergei Prokofiev on her second start back in April before turning in creditable placed efforts in Group 3 and Listed company. A deserved black-type success in the Silver Flash Stakes followed and she has continued to progress since then, capturing the Debutante Stakes en route to her decisive Moyglare Stud Stakes win, in which she had the weekend’s Group winners Hermosa and Just Wonderful in arrears.

“She’s back at home now and out in the paddock,” says Rogers. “We could have gone to the Breeders’ Cup but she’s done everything we’ve asked of her and now she’s out having a break – turning them out at this time of year can really crown them.”

Skitter Scatter is the second foal out of the winning Dane Street after the Grade 3-placed Data Dependent. Dane Street was a smart two-time winner foaled by their excellent mare Daneleta, who was sourced privately off the track by the stud with long-time partner Robert Clay, then owner of Three Chimneys Farm. Dane Street has a brother to Data Dependent, by More Than Ready, heading to Book 1 of the Tattersalls October Sale next week.

“Patrick thinks she likes the ground like the road,” says Rogers. “It’s a long time to wait until May and the ground will guide us, whether we go for the English or Irish Guineas.”

In pictures: inspections under way for Ireland's premier yearling sale