At The Sales AUSTRALIA 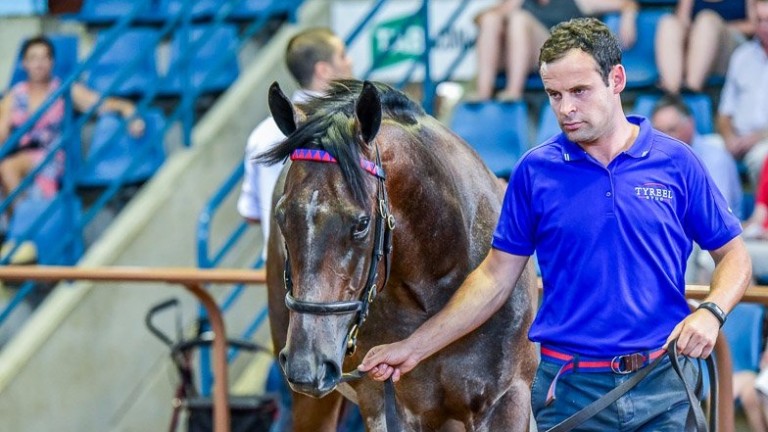 “I’m not a big filly buyer traditionally but I’ve got some colts at home now that I’ll need mares for in time so hopefully this one can run and justify the buy,’’ Bell said. “She’s a very nice filly out of one of the great families that I’ve long wanted to be involved in. Her athleticism and overall quality stood out to me, she looks like a beautiful running type of filly.’’

The filly is out of the winning Encosta De Lago mare Sevruga, who is herself out of a half-sister to the dam of champion sire Storm Cat.

The session’s most expensive colt was the son of veteran shuttler More Than Ready offered by Henley Park who went the way of Queensland trainer Kelly Schweida for A$300,000.

The colt is out of the unraced Redoute's Choice mare Starwish and is a half-brother to Deep Image, who has won one of his two starts, and also finished second to Winning Rupert on debut.

“I have a soft spot for the More Than Readys, given I trained Better Than Ready, and I like Redoute’s Choice mares, so it made sense to me,’’ Schweida said. “For me he was the colt of the sale so I’m glad to be taking him home.’’

The second day picked up where the first left off, with the inaugural Gold Riband session on Saturday generating turnover of A$6,510,000, an average of A$130,200 and a clearance rate of 88 per cent.

The Gold Riband session, designed to showcase the stock that the Inglis bloodstock team believe would be competitive in the elite two-year-old races, produced the sale’s top two lots, both of which were offered by Tyreel Stud.

Top-lot honours went the way of a Not A Single Doubt colt out of Pinocchio who was snapped up by Carmel Size, on behalf of Mr Bon Ho, for A$400,000. The colt will head into training with Les Bridge.

“He’s a really athletic colt, very neat, I liked the way he got around, he’s a really great mover,’’ Size said. “He’s still got a lot of improvement in him physically so he won’t be rushed.’’

Boomer Bloodstock and Murray Thoroughbreds combined to secure the second top lot, a daughter of Yarraman Park’s red-hot sire I Am Invincible out of Family Crest for A$360,000.

“I Am Invincible, I’ll be honest, he’s a sire I want to get my hands on as many of his progeny as I can. He’s flying,’’ Craig Rounsefell of Boomer Bloodstock said. “I rated this filly the filly of the sale and on par with any filly I’ve seen this year.’’

“We were hoping to work up to an average of A$100,000 for the Gold Riband in the first two years. To get an average of $130,000 in the first year is beyond our wildest expectations,’’ he said. “It was a new idea, we were trying something fresh and those things don’t always work, but thanks to the support of our vendors and a strong buying bench here tonight, we’re delighted with the results.

“I must give a special mention to Linda Monds at Tyreel. To get the two highest prices of the night is a fantastic achievement and I’d like to congratulate her and her husband, Lawrence, and thank her for the confidence in her support of the Gold Riband concept.’’

The three-day sale concludes on Monday, with selling beginning at 9am local time (10pm Sunday GMT).