At The Sales AUSTRALIA

Strong renewal of the Inglis Classic Sale finishes on a high 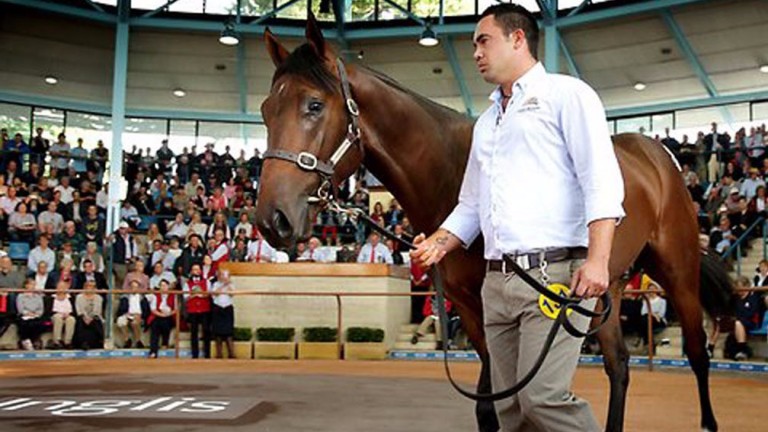 The leading vendor by average with three or more sold was Tyreel Stud, who sold seven yearlings an average of A$198,667.

The stud also supplied the two most expensive lots at the sale, a Not A Single Doubt colt out of Pinnochio who was knocked down to Carmel Size on behalf of Bon Ho for A$400,000, and an I Am Invincible filly out of Family Crest that went the way of Boomer Bloodstock and Murray Thoroughbreds for A$360,000.

"I'm very proud of the product we've bought to this sale and it was really good to be able to present the ones we did in the Gold Riband session as well,'' Tyreel's Linda Monds said. "We're a small farm, a small team and I'm very proud of what my team has produced from their hard work. They deserve this result.''

Leading the sires' table by average with three or more lots sold was Vinery's shuttle stallion More Than Ready, who saw three of his yearlings change hands for an average of A$176,667.

All 27 of Yarraman Park's I Am Invincible yearlings sold to see him comfortably clear in the leading sires' table by aggregate, with A$4,015,000 spent on his sons and daughters.

The top lot on the final day was the Fastnet Rock filly out of Esprit De Bleu filly who went the way of Matt Laurie for $230,000.

"She's a lovely bodied filly. I've got the [Smart Missile] half-brother at home and he's certainly shown us a bit so I was keen to get my hands on this filly,'' Laurie said. "He hasn't raced yet, so I might be proven an idiot but I really like the family and I love this filly.''

At the close of trade Inglis managing director Mark Webster heaped praise of those responsible for making the sale such a success.

"I'd really like to thank all the vendors and breeders for trusting us with their better quality yearlings and I'm so happy that we were able to get the vast majority sold for them,'' he said.

"I also want to mention the vast array of buyers who attended the sale, all the stable staff who worked tirelessly through some very hot conditions and very long days and nights.''

FIRST PUBLISHED 2:00AM, FEB 16 2017
He hasn't raced yet, so I might be proven an idiot but I really like the family and I love this filly