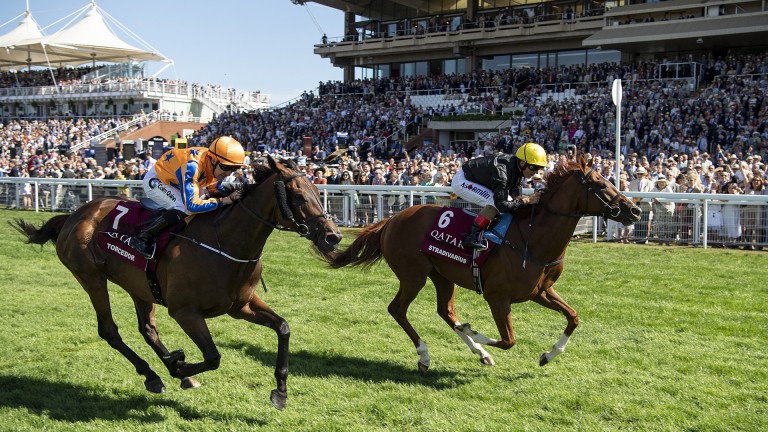 Torcedor (left) has his first test since finishing second to Stradivarius at Goodwood
Edward Whitaker (racingpost.com/photos)
1 of 1
UPDATED 5:51PM, AUG 1 2018

Bjorn Nielsen has already owned a Classic winner in 2011 St Leger hero Masked Marvel. In trying to produce another he ended up with Stradivarius. As failures go it is one he is very happy with.

When Nielsen sent Private Life, a 70,000 guineas purchase in 2006, to be covered by Sea The Stars it was the Derby he was trying to win. The Derby has always been the ultimate goal for Nielsen, whose family moved to Epsom from South Africa in his youth.

Explaining the pairing after Stradivarius's second Goodwood Cup triumph he said: "You're always trying to add that thing you think you didn't have before. When you come up with a horse like this it's mainly a large slice of luck to do it, but that's the game of breeding.

"The progeny before was Rembrandt Van Rijn, he was a Peintre Celebre and he was quite inbred. He was a really quirky horse whereas this horse is like a police horse - you can see him walking around and nothing bothers him, but his half brother was as quirky as can be, he'd dump people on the gallops. That was probably my fault for inbreeding Peintre Celebre's family on both the top and the bottom.

"The other thing was this mare was always producing a neat horse, so I wanted to give her a bit more size. Look, I didn't think I'd have a two/two and a half mile stayer, I was trying to breed a horse to win the Derby and I've come up short so many times I still haven't found the recipe. But it's great to own a horse like this."

That is in part because Nielsen, who was a promising junior tennis player who made his money in the hedge fund world, fell in love with stayers long before his Assessor won races like the Prix Royal Oak, Yorkshire Cup, Doncaster Cup and Prix du Cadran between 1992 and 1993.

"I grew up in the era of Ardross, Le Moss, Buckskin and Sagaro, and those great stayers won a couple of these [Goodwood Cups], a couple of Gold Cups and a couple of Yorkshire Cups, so if you are going to be one of those really good horses you have to win a few of these," he said.

"I'm not saying he's that good, and it's great to win them once, don't get me wrong, but to have a horse with the chance of achieving those kinds of feats is a once-in-a-lifetime thing. We'll see next year if he can do it again."

FIRST PUBLISHED 5:34PM, AUG 1 2018
You're always trying to add that thing you think you didn't have before. When you come up with a horse like this it's mainly a large slice of luck

Coolmore strike for €440,000 Camelot colt on a day of Wootton Bassett domination 'Things didn't go his way' - future of Stradivarius to be determined this week Fury and frustration but also an abundance of smiles on a vintage Champions Day Stradivarius and Trueshan take to the stage again in classy Champions Day opener 'The best year since Frankel' and 'off the charts' - epic Champions Day awaits Champions Day: big guns on course for Ascot but Poetic Flare out of QEII