Storm The Stars snapped up to stand at stud in France 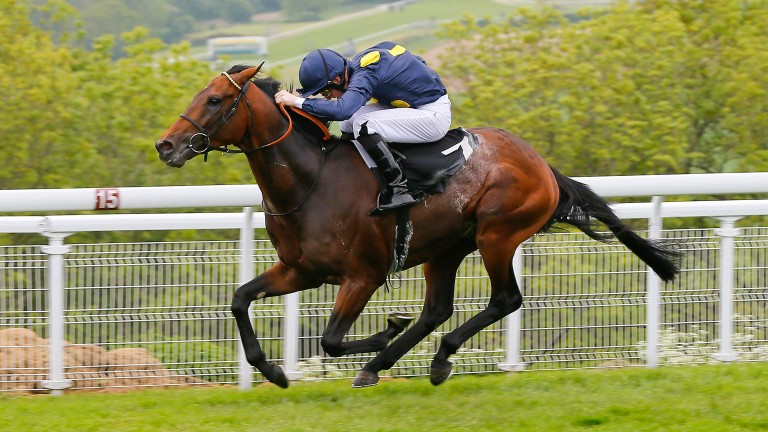 Storm The Stars: Never finished out of the first four as a three-year-old
Mark Cranham
1 of 1
By Martin Stevens 3:01PM, NOV 8 2017

Great Voltigeur Stakes winner and Derby third Storm The Stars will start his stallion career at Haras du Lion in France next year at a fee of €4,000.

The five-year-old son of Sea The Stars was trained by William Haggas for Sheikh Juma Dalmook Al Maktoum to finish second on both his starts at two – including when running Golden Horn to a head second at Nottingham.

In the following season he broke his maiden at Leicester and went on to finish second in the Chester Vase, win the Listed Cocked Hat Stakes and finished third, behind Golden Horn again, in the Derby.

Storm The Stars then finished runner-up to Jack Hobbs in the Irish Derby, third to Erupt in the Grand Prix de Paris, won the Great Voltigeur Stakes and finished fourth to Simple Verse in the St Leger.

That three-year-old season, in which he never finished out of the first four, took in seven consecutive stakes races between May and September, certainly testified to his toughness.

The horse was later transferred to be trained by Chris Waller in Australia, where his best efforts were a pair of third-place finishes behind Hartnell in Group 2 contests at Randwick.

Storm The Stars hails from one of the most active families in the studbook. He was bred by Summer Wind Farm out of the Sadler's Wells mare Love Me Only, a half-sister to Giant's Causeway as well as the blue hen You'resothrilling, dam of three Group 1 winners including Happily this year, and Pearling, who produced the Irish Champion Stakes hero of 2017 in Decorated Knight.

Storm The Stars is standing in association with Sheikh Juma, who will support the stallion with mares, and the deal was struck by bloodstock agent Richard Venn.

If you are interested in this, you should read

The Queen's Recorder to stand at Haras de Montfort and Preaux

FIRST PUBLISHED 3:01PM, NOV 8 2017
He was bred by Summer Wind Farm out of the Sadler's Wells mare Love Me Only, a half-sister to Giant's Causeway