Storm The Hill tops fifth session and will stay in training

Get Stormy filly sold for $275,000 to Alastar Thoroughbreds 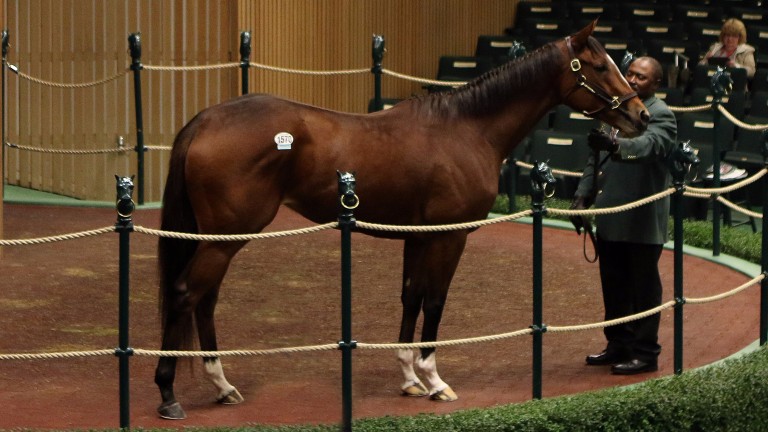 Storm The Hill topped the fifth session of the Keeneland November Sale and will race for her new connections
Keeneland Photo
1 of 1
By Ron Mitchell of the BloodHorse UPDATED 10:47AM, NOV 12 2017

Storm The Hill, a three-year-old filly who became a stakes winner at Santa Anita Park after she was catalogued for the Keeneland November Sale, was purchased by Lynn and Rovena Alexander's Alastar Thoroughbreds for $275,000, the top price during the fifth session of the Lexington auction.

When the Keeneland catalogue was released, Storm The Hill was stakes-placed. But then she took the Unzip Me Stakes at Santa Anita September 30 and finished third in the Grade 3 Autumn Miss Stakes on turf on October 29 to increase her earnings to $172,995.

Mike Akers, who represented Alastar in the transaction, said the filly will remain in training, but he did not know who will condition her. She was trained by Peter Miller for her last five starts. Akers said the price was in the ballpark of what he was prepared to pay.

"She was just a lovely filly," said Meg Levy, whose Bluewater Sales consigned Storm The Hill. "She did what she was supposed to do. She is what everybody wants. She vets. She's beautiful."

Levy said the filly fell within the regular portion of the catalogue rather than the racing-age segment that takes place November 13-14 because her racing career was not as accomplished when she was entered in the sale.

A bay daughter of Get Stormy bred in Kentucky by Kimberly Bradley and William Bradley, Storm The Hill was produced from Thornhill, a daughter of Good And Tough who earned $117,123, won four races, and has produced stakes-placed runner Fleur De Lilly. Thornhill is a half-sister to the hard-knocking multiple stakes winner Superior Storm, who tallied 16 wins in 29 starts and earned more than $1 million.

Springhouse Farm acquired five horses for $595,000 to be the session's leading buyer.

The November Sale continues through to November 18, with all sessions beginning at 10am ET.