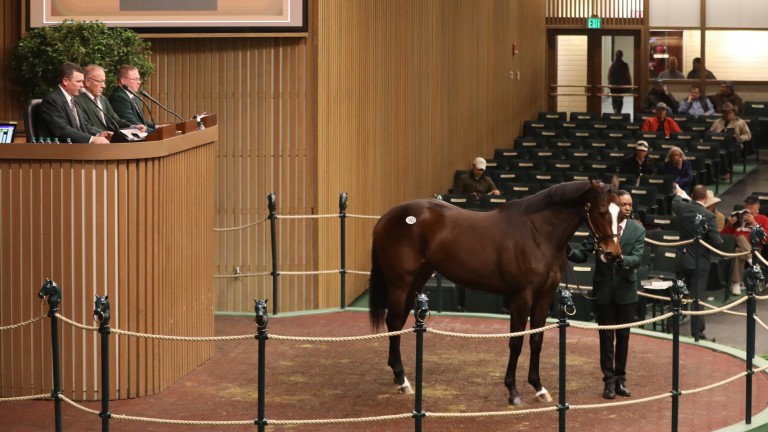 With Keeneland's January Horses of All Ages Sale entering the homestretch, trade during the penultimate session on Thursday mirrored that of the previous three sessions, with stiff competition for the better-quality racing and broodmare prospects and in-foal mares and continued demand for short yearlings.

Adrian Wallace of Stripes Stable went to $150,000 to acquire Tip Top Tap, a five-year-old Tapit mare who is a full-sister to Grade 1 winner and $1.5m earner Ring Weekend. Cataloged by Gainesway as Hip 1,272, the mare was sold in foal to Kantharos. Free The Magic, the Stakes-placed Cryptoclearance mare who produced Tip Top Tap, is a half-sister to British Group 2 winner Forest Wind and Stakes winner Three Generations and a full-sister to stakes winner Flash Of Joy.

Wallace, who handles nomination sales at Coolmore's Ashford Stud, said he bought the mare on his account.

"It's a lovely family, and she was very well covered," Wallace said of the mare's covering sire. "I think she will be a nice broodmare; she is a nice young mare."

Gainesway's Neil Howard said the mare had a lot to recommend her to buyers.

"Obviously, it is a very good family, and Tapit is making a name for himself as a broodmare sire," Howard said. "We're delighted that she brought that kind of money."

Two foals that went through the ring in succession were bought by Knockgriffin Farm to be the top-priced short yearlings on the day.

Knockgriffin purchased Hip 1,485, a colt from the first crop of American Freedom, for $80,000 from the consignment of Stuart Morris, agent for Morgan's Ford Farm.

The Virginia-bred colt was produced from the female family of multiple Grade 3 winner Shawnee Country and such black-type runners as Realm, North Freeway, Take The One O One, and Square Deal.

The next horse through the ring, a 2019 son of Street Boss, was bought by Knockgriffin for $90,000. Consigned by Indian Creek, agent, the colt bred in Kentucky by Kingswood Farm is out of the winning Smart Strike mare Lotta Lolly, a full-sister to Grade 1 winner Square Eddie.

The sale concludes on Friday.

FIRST PUBLISHED 4:15PM, JAN 17 2020
it is a very good family, and Tapit is making a name for himself as a broodmare sire