Stephanie Frances and Legacy Gold can light up January Sale

Both nine-year-olds will appear during the mares' session 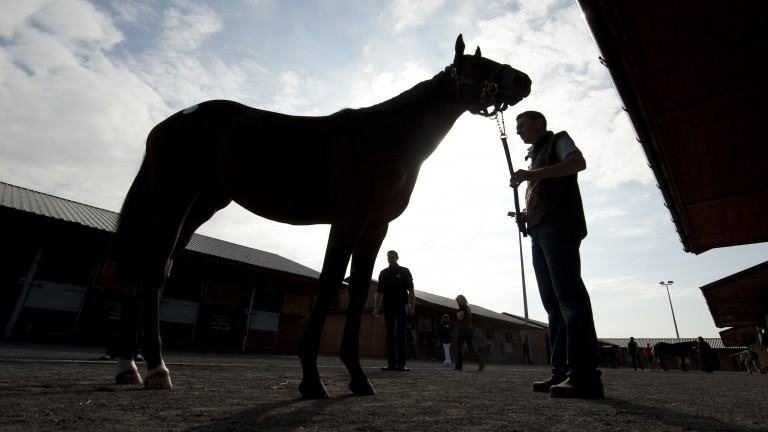 Goffs UK: will offer horses-in-training, foals and mares at the January Sale
Edward Whitaker
1 of 1
By Ollie O'Donoghue 7:06PM, JAN 11 2017

A larger catalogue will see the 2017 Goffs UK January Sale at Doncaster held over two days with the horses-in-training to go under the hammer on Tuesday, January 24 while the National Hunt mares and foals will be offered on Wednesday, January 25.

The horses-in-training session will include 142 lots and features dispersal drafts from the late Graham Roach and former trainer Victor Thompson, as well as consignments from Godolphin and Shadwell.

The Graham Roach dispersal is of particular interest, with 14 lots set to go under the hammer.

All Set To Go (Lot 59), a six-year-old son of Verglas, has won four hurdle races and was placed third in the Group 3 Ballysax Stakes on the Flat at Navan.

Morito Du Berlais (60) finished third in a Listed hurdle at Cheltenham in November and is a half-brother to the dual Grade 2-winning hurdler Nikita Du Berlais.

Ruben Cotter (61) won three chases for Paul Nicholls including the Class 2 Silver Bowl Handicap Chase at Kempton, while The Happy Chappy (62), a six-year-old son of Flemensfirth, was unbeaten in two starts in point-to-points in the UK before finishing third on his hurdling debut at Hereford.

Among the foals on offer are two from the Shade Oak Stud, a Black Sam Bellamy filly (168) out of a half-sister to the Grade 1 Long Walk Hurdle winner Lough Derg and a Fame And Glory filly (195) out of the Grade 3-winning hurdler Laetitia.

Dan Skelton's Lodge Hill Stables will offer Stephanie Frances (306), a nine-year-old daughter of King's Theatre and a Listed winner twice over hurdles and once over fences.

Hurst Farm consigns Legacy Gold (308) on behalf of owner Roger Brookhouse. She was third behind Vroum Vroum Mag in the 2016 Mares' Hurdle at Cheltenham and won a Listed bumper at Aintree for trainer Stuart Crawford.

Tony Williams, managing director of Goffs UK, said: "We are delighted with the quality of the catalogue and the fact that the sale has seen an increase in numbers shows that its popularity is growing.

"The National Hunt foal session continues to build every year and we will be offering another very attractive line up which comes off the back of strong foal trade in 2016.

"Having the Graham Roach and Victor Thompson dispersals alongside the likes of the Godolphin and Shadwell drafts certainly adds depth to the horses-in-training session and we are grateful that they chose the Doncaster January Sale in which to offer their drafts.

"We have secured some high-class point-to-pointers and horses-in-training which will be supplemented into the sale in the coming days and we will continue to source further high class entries over the coming fortnight."