Onwards and upwards for Pitchall Stud's son of Midnight Legend 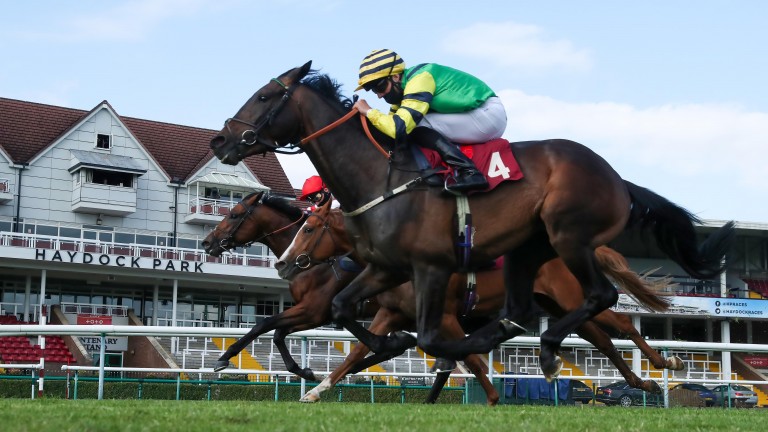 Midnights Legacy, subject of an ambitious plan since his birth to become a stallion, edged closer to realising that dream with victory on his debut in handicap company on Sunday and is now set to be stepped up in trip by trainer Alan King.

The Pitchall Stud-bred and owned three-year-old, one of the last colt foals born to the operation's rags to riches phenomenon Midnight Legend, was the impressive winner of a Bath novice stakes on his second start last October and scored in a Class 4 event over ten furlongs at Haydock on his three-year-old bow on Sunday.

Midnights Legacy showed plenty of the talent and grit that his late sire became famous for imparting to his progeny, as he was under pressure two furlongs from home but stayed on well to defeat Maori Knight and Crystal Pegasus – sons of Derby winners Camelot and Australia no less – by a head.

“We were absolutely thrilled,” said Pitchall Stud's Kathleen Holmes on Monday. “It's just the perfect lift we needed. So many people have been waiting to watch him run and judging by the long list of texts, calls and emails still coming they're all as excited by this project as we are.

“Alan reported that he trotted up in the yard today as if he hadn't had a race. The plan is to step him up to a mile and a half, probably in another handicap in two to three weeks' time, and then we'll take it from there.”

Holmes added that the long-term plan is still to send Midnights Legacy juvenile hurdling at the end of the year.

Midnight Legend, a son of Night Shift, was a high-class Flat performer who was left entire when sent into the jumps sphere, where he won Grade 2 novice hurdles at Aintree and Punchestown and finished third to Istabraq in the Aintree Hurdle.

He was retired to stud with little fanfare but breeders sat up and took notice when his first moderately bred crops yielded talented performers such as Aimigayle, Holmwood Legend, Midnight Chase, My Petra and Sparky May.

Midnight Legend died aged 25 in 2016 leaving few or no sons who had not been gelded to continue his line, as is the case with nearly all British and Irish-based jumps sires.

That prompted the Holmes' to spare Midnights Legacy the unkindest cut in the hope he could eventually win a Graded race over jumps to justify him retiring to stud to become a stallion.

The fact that the colt boasts a classy female family redoubled their determination to embark on the project. He is out of the winning Generous mare Giving, a half-sister to stakes winners Burn The Breeze and Lethals Lady who has also produced Listed-winning juvenile hurdlers Giving Glances and Midnights' Gift and another stakes-placed juvenile hurdler in Forgiving Glance.

Giving Glances (by the Holmes' other stallion Passing Glances, who stands at Batsford Stud) and Midnights' Gift, another by Midnight Legend, returned to King this week to be campaigned on the Flat.

Giving Back, a five-time winner by Midnight Legend out of Giving, has been retired and is in foal to Passing Glance.