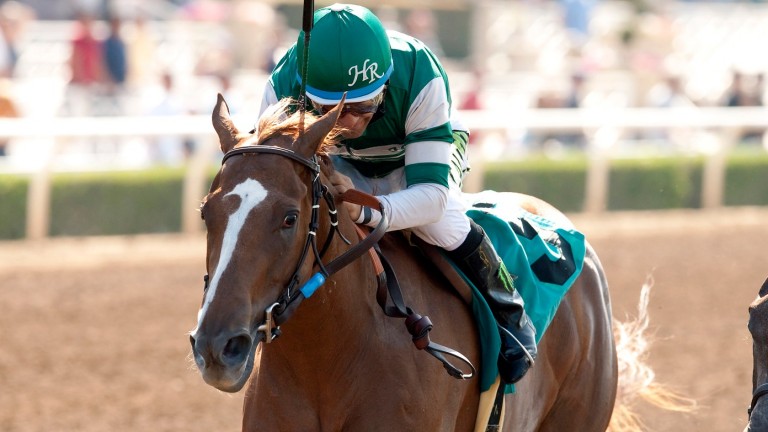 In the latest chapter of one of racing’s grandest Cinderella stories, the least valued yearling in the entire Fasig-Tipton Saratoga Select Sale of 2013 is set to race in the $16 million Pegasus World Cup on Saturday just a few months after commanding a $6 million bid from Coolmore.

Stellar Wind, the daughter of Curlin who was knocked down to a savvy group of pinhookers for the lowest price of the Saratoga auction, a modest $40,000, rocketed to fame, becoming America’s champion three-year-old filly of 2015 and winning six Grade 1 races and $2,253,200.

Following her sale to Coolmore at Keeneland in November, the now six-year-old mare was slated to have a date with Triple Crown winner American Pharoah in the Ashford Stud breeding shed this season.

Those plans can wait, however, until after she is sent on a quest for the $7 million winner's prize in the world's richest race, a competition that will be her first against males and has drawn a strong field led by Breeders' Cup Classic winner and likely Horse of the Year Gun Runner.

No one who was around Stellar Wind as a yearling would have predicted the sky-high trajectory of her life afterward.

John Stuart, who through his Bluegrass Thoroughbred Services consigned the hot-natured chestnut at the Saratoga sale, recalled that the filly was a late bloomer and had some sesamoiditis.

"It wasn't that she didn't have a lot of good things going for her," Stuart said, noting that the filly bred by Peggy Augustus's Keswick Stables in a foal share with Barbara Banke's Stonestreet Thoroughbred Holdings was the first foal out of the winning Malibu Moon mare Evening Star, a half-sister to the dam of Grade 1 winner Great Hunter.

"She was just immature at the time - she was tall and narrow, and that's not a look they like at sales - and she wouldn't stand still for people to look at her," he said.

There were no veterinary scopes of the filly, who was offered without reserve by Augustus, a longtime seller at Saratoga who had bred about 20 per cent stakes winners from her boutique broodmare band before closing her operation; Stellar Wind was the last foal she bred, Stuart said.

The filly's lack of appeal was in stark contrast to demand for the big, bay Dynaformer filly in the stall next to her who went on to top the sale - fulfilling a longtime goal for consignor Stuart - when purchased by Three Chimneys Farm for $1.225 million. Bred by Calumet Farm's Brad Kelley and later named Lady Zuzu, that filly went on to place in multiple Graded stakes.

"Some people came up to me and said their veterinarian had looked at the x-rays of the Curlin filly and wouldn't let them buy her," recalled Stuart, adding that at that time, Curlin's first offspring were just three and hadn't yet made a big impression, another mark against her.

Yet those factors didn't stop the handful of pinhookers who pooled funds to buy her, signing the sale ticket as Vernan Lee Stables. While most don't want their names revealed, they pointed to longtime buyer and consignor Marshall Silverman of Pennsylvania as a spokesman.

"She was by Curlin, and for the money she brought, it made sense to buy her," said Silverman, who had prowled the Saratoga barns looking for pinhooking prospects. "If you could have looked into a magic crystal ball and seen the future, you would never have sold her."

But after less than two months on a farm in Kentucky, the filly was offered for sale again. On this occasion, she drew $86,000 from Maryland-based owner Barbara Houck at Fasig-Tipton's Midlantic Fall Yearling Sale in Timonium, Maryland, while consigned by Silverman.

"She was a real redhead," Silverman recalled. "She would wring her tail and not want to go back into her stall after being shown. Those kind of fillies, they either aren't worth two cents or they're super horses."

Houck named the filly Stellar Wind and later sent her to trainer Donald Barr, who Silverman said "had a heck of a job getting her to the racetrack". Stellar Wind would sometimes balk and fidget for 30 minutes before agreeing to go to the track to train.

Yet she could run. She finished third on debut and then thundered to a commanding victory in a one-mile maiden at Laurel Park in December of her juvenile year.

That performance put her on the radar of Hronis Racing principals Kosta and Pete Hronis and their California-based trainer, John Sadler, and they purchased Stellar Wind privately for an amount reportedly about ten times her yearling sale price.

She immediately returned dividends, winning the Grade 1 Santa Anita Oaks and finishing second by a neck to the older Stopchargingmaria - who bumped Stellar Wind and floated her wide in the stretch - in the Breeders' Cup Distaff during her championship season.

The rest of her career is history, and the once lowest-priced Saratoga yearling clearly impressed many of the world's most prominent breeders and buyers when she topped the Keeneland November Sale.

"She was very good-looking, she was a champion and was brilliant for most of her life," Coolmore's MV Magnier praised, having made the winning bid.

While she won't be the Pegasus favourite after being saddled by new trainer Chad Brown, Stellar Wind will prove yet again, even if just by being in the post parade for the $16 million race, that there is more to buying racehorse prospects than perfect looks and the latest fad in sires.

"What's that saying about the sharpest horse buyers in the world?" asked Stuart in reflecting on Stellar Wind's story. "It says a lot about what is perceived about a horse, and what is hot and what is not."

FIRST PUBLISHED 6:00PM, JAN 26 2018
If you could have looked into a magic crystal ball and seen the future, you would never have sold her