Stellar Wind to come under the hammer during November Sale 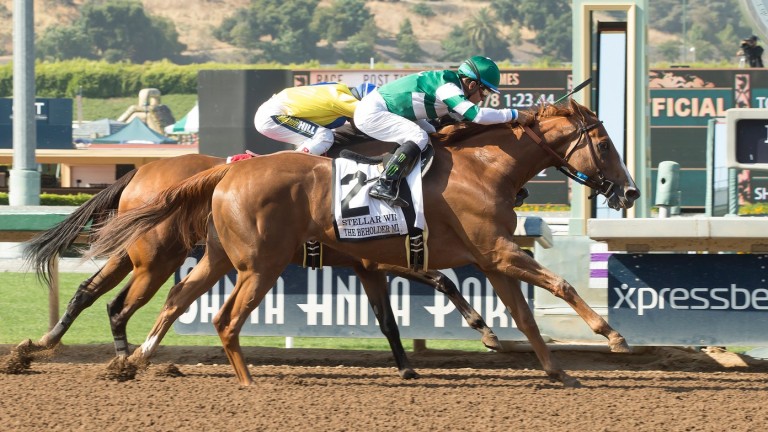 Six-time Grade 1 winner Stellar Wind is due to be offered at this year's Keeneland's November Sale, where she will be consigned by Lane's End Sales.

The five-year-old daughter of Curlin has won ten of her 15 starts, has amassed $2,233,200 in prize-money, and was named champion three-year-old filly in 2015 after running out a five-and-a-quarter-length winner of the Santa Anita Oaks.

"Stellar Wind is without a doubt one of the classiest horses I've ever been around, and is everything you could want in a racehorse and a broodmare prospect," said her trainer John Sadler. "She has a high cruising speed, is sound, and has an incredible will to win. That was on display last year when she beat Beholder on the square not once but twice, in the Grade 1 Clement L Hirsch and the Zenyatta Stakes."

Stellar Wind is unbeaten in 2017, having landed the Apple Blossom Handicap, the Beholder Mile Stakes and a second consecutive running of the Clement L Hirsch Stakes. She is the first foal out of the winning Malibu Moon mare Evening Star, meaning she is from the immediate family of this year's Met Mile winner Mor Spirit and the further family of Grade 1-winning juvenile Great Hunter.

"We have the opportunity to bring some terrific mares to Keeneland November, and Stellar Wind is certainly at the top," said Lane's End's Will Farish.

"She's been a Grade 1 winner at three, four and five, winning six Grade 1 races in total against some of the best filly and mare competition of recent times. With her pedigree, she'll hold tremendous appeal to both domestic and international buyers. Stellar Wind is one the finest broodmare prospects to come to market in recent times."

FIRST PUBLISHED 11:14AM, AUG 24 2017
Stellar Wind is without a doubt one of the classiest horses I've ever been around, and is everything you could want in a racehorse and a broodmare