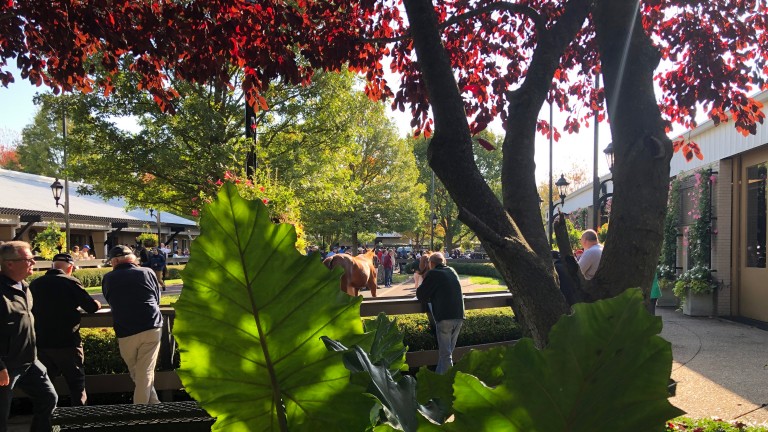 Progeny of Medaglia D'Oro were in favour at Fasig-Tipton October
Fasig-Tipton Photos
1 of 1
By Ron Mitchell/Bloodhorse 3:00AM, OCT 22 2019

Trade maintained the status quo during Monday's first session of the Fasig-Tipton Kentucky October Yearlings Sale, with quality in demand but tepid interest in horses that did not clear the bar set by buyers.

The session-topper, bought by the Green family's DJ Stable for $400,000 was a grey or roan yearling filly out of the Unbridled's Song mare Appealing Bride, who has also produced Kelso Handicap winner Appealing Tale and stakes winner Colerful Bride.

"She was one of our top horses on the list," said Jonathan Green, who was accompanied by his father Leonard Green and trainer John Servis. "John Servis and Jim McGreevy gave us a wonderful short list to work with and this filly was near or at the top of that list.

"She looks like she will be able to get two turns and is a Saturday horse. She had a pedigree we really liked and Unbridled's Song is one of the top broodmare sires out there."

Green said the filly was purchased only in DJ Stable's name but there is a possibility a partner will join the ownership. Among the horses trained by Servis for the Green's was champion filly Jaywalk, campaigned in partnership with Cash is King Stable.

"We've had luck buying in October in the past," Green said. "There are a lot of nice athletes here; a lot of horses who look like they can run in stakes over the weekend going forward."

Pickerell said the colt was bought to be re-sold next year at The Gulfstream Sale, Fasig-Tipton's selected two-year-olds in training auction. 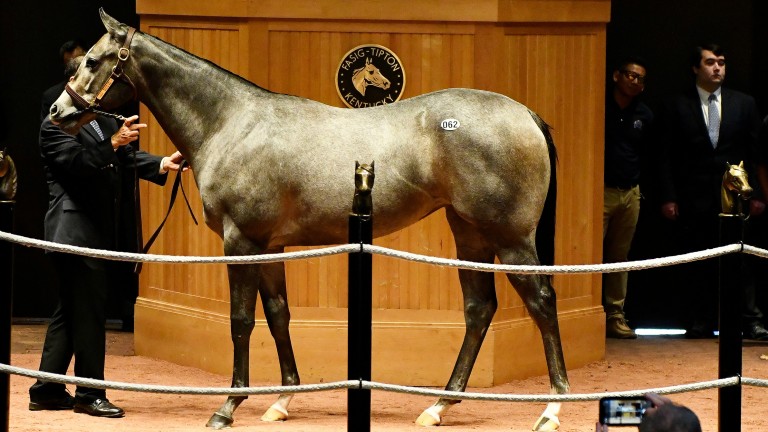 "He's a top kind of horse," Pickerell said, adding the partners did not believe they would be able to afford the colt, but stretched to take him home.

"We didn't think we'd be able to get it done. That was a little outside our comfort zone but he was the physical that matches it."

Pickerell said Pick View has some committed partners who have enabled the operation to upgrade its pinhooking investments.

"We're lucky enough to have investors that have had a couple of good years in a row and we're going to increase our quality and try to take horses like him to the bigger sales," he said.

Candy Meadows' Matt Lyons said one reason the colt landed in the final yearling sale of the year was a result of his late foaling date.

"He's a late foal and a lovely, lovely horse, and a beautiful mover," Lyons said. "He was in the right spot and we had some action on him. I think that was a fair price for him and I hope they make money."

The 101 lots that went unsold represented an RNA [reserve not attained] rate of 29 per cent.

According to Bloodhorse MarketWatch data, there were 30 yearlings sold for six figures during day one this year, compared with 16 a year ago.

Fasig-Tipton president Boyd Browning was enthused by the strong start, noting there was strength in the session from start to finish.

"It's a similar marketplace we've seen all year. The record is broken no matter if we're [referring to] selling two-year-olds, yearlings, or weanlings and mares in November.

"It doesn't mean they won't be runners, but the market's tough on those horses."

With warm, sunny autumn weather at the start that transitioned into a steady rainfall, Fasig-Tipton's sale drew a large crowd that included all the major players in the industry, underscoring continued depth within the market.

"There was a huge crowd here today; there is plenty of interest," Browning said.

Browning said success by Baccari and other consignors with well-bred, well-conformed foals reinforced the notion that despite the October sale being the last auction on the yearling sales calendar, there will be demand for quality.

"Sales placement is so crucial and so critical," he said. "You have a very sophisticated and professional buying group, here and throughout other sales markets.

With 1,590 horses catalogued, the October sale has grown both in numbers and stature within the industry, Browning said, leading to a broader buyer base in attendance.

"It's far and away the biggest sale we've got," he said. "The sale has got both a national and international presence, and we saw some very active participation from the international front today, not on the uber-elite horses, but on the 'bread and butter' horses.

"You put together a catalogue of nearly 1,600 horses with a good group of pedigrees and a lot of opportunities in various state-bred programmes it makes your recruiting a little easier."

FIRST PUBLISHED 3:00AM, OCT 22 2019
Sales placement is so crucial and so critical. You have a very sophisticated and professional buying group, here and throughout other sales markets