Starspangledbanner back with a bang as daughter dazzles on debut 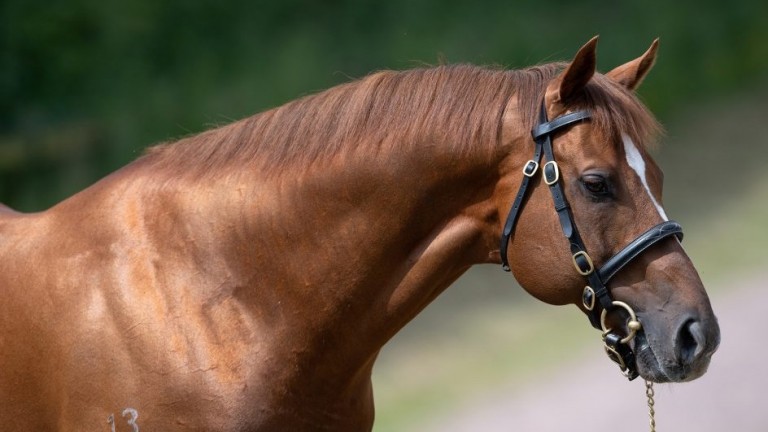 Starspangledbanner is well and truly back with a bang.

The Coolmore stallion, who formerly experienced fertility problems, this year has his first northern-hemisphere conceived juveniles on the ground since 2015.

On Wednesday, an early runner from that crop, the Archie Watson-trained Lady Kermit, showed blistering speed to burn off her rivals and win a 5f fillies' novice stakes at Kempton by six lengths on debut.

Lady Kermit was selected by agent Matthew Houldsworth, who bought her for £50,000 at the Goffs UK Premier Yearling Sale, as a two-year-old to follow for 2019 in a feature in the Racing Post Bloodstock pages last week.

Houldsworth reported portentously in that article: "Lady Kermit came from Doncaster and is a very good-looking filly.

“The brief was to find something early and she looks exactly that. She's gone to the right man in Archie Watson. I know she's due to run in April and I think she'll be quite decent.”

The January-foaled Lady Kermit was bred by Philip and Orla Hore's Mount Eaton Stud and is the first offspring of the placed Dansili mare Empress Theodora, a half-sister to stakes-placed Atlantis Star and Liwa Palace.

Empress Theodora is in turn out of Ladeena, a winning daughter of Dubai Millennium and Fillies' Mile winner and 1,000 Guineas second Aqaarid.

The Hores were presumably very happy with Lady Kermit as a foal as Empress Theodora immediately returned to Starspangledbanner and also has a yearling filly by the stallion.

Last year the mare visited Prince Of Lir, the Ballyhane Stud-based Norfolk Stakes winner who was bred by the Hores.

Starspangledbanner, a well-bred son of Choisir, won the Caulfield Guineas and Oakleigh Plate in his native Australia and completed the Golden Jubilee Stakes and July Cup double after joining Aidan O'Brien.

He initially encountered fertility problems after being retired to Coolmore, and his depleted first crop of 33 foals yielded 21 winners including Anthem Alexander and The Wow Signal, who struck in Royal Ascot juvenile contests, and the classy Home Of The Brave.

His second European crop of just 11 foals has delivered six winners, including multiple scorers Shaiyem, Siege Of Boston and The Commendatore.

Starspangledbanner remained at stud in Australia in 2013 and 2014, and was due to return to Coolmore in Ireland in 2015 after the exploits of Anthem Alexander and The Wow Signal, but missed the shuttle trip due to a bout of colic.

He finally returned to Coolmore in 2016 and experienced a significant upturn in fertility, with Weatherbys recording the 120 mares covered by him having produced 70 foals who are now two-year-olds.

The first runner from that crop, the David Evans-trained colt Dorchester Dom, ran a cracker in defeat when fourth of 17 runners in a competitive Brocklesby Stakes on Saturday.

Starspangledbanner covered 123 mares in 2017 and 152 in 2018, and his striking start to the season is bound to win him more support in the coming weeks at Coolmore, where he is standing this season at a fee of €17,500.

Starspangledbanner ready to write next chapter in his remarkable tale