Star mating in line for Iffranesia after sale to Arrowfield Stud 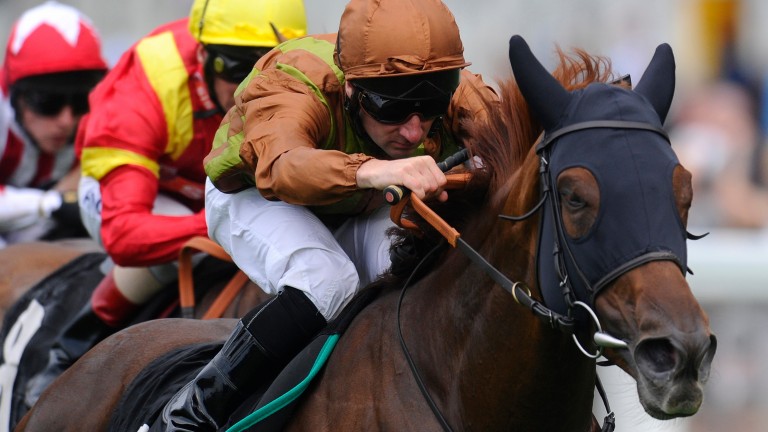 Iffranesia: daughter of Iffraaj was a talented sprinter
Alan Crowhurst
1 of 1
By Martin Stevens 2:23PM, FEB 10 2017

The rags-to-riches story of Iffranesia is continuing as the class 7 handicapper turned Listed winner has a date with one of Australia's leading stallions after her sale to Arrowfield Stud.

Iffranesia joined Robert Cowell from France with a lowly official rating of 49 in 2013 and won a class 7 handicap at Kempton at 20-1 on her second start for the trainer.

The daughter of Iffraaj climbed through the handicap ranks with five victories in 2014 and in the following season she broke through at black-type level, winning the Listed Prix de Bonneval at Chantilly.

Last year at six she finished a creditable third to Ardhoomey and Washington DC in the Group 2 Flying Five Stakes at the Curragh.

Iffranesia retired with nine wins and another seven placings and a peak rating of 103.

That decent sprinting form caught the eye of Australia's leading nursery Arrowfield Stud, which has bought her privately out of Cowell's stable.

The stud's bloodstock manager Jon Freyer said: “Paul Messara and I called in on Robert during our recent visit to the UK - we saw Iffranesia, liked her, and Robert recommended her so we bought her straight away.

“She’s a lovely mare, a great type with a fair bit of talent, and ideal on pedigree and physique for Snitzel, so she’ll probably go to him this year.”

Snitzel has carved out a reputation at Arrowfield Stud as one of Australia's best stallions, whose top-class progeny includes Hot Snitzel, Shamus Award, Snitzerland, Sun Jewellery and Wandjina.

Iffranesia raced for Cyril Humphris, who bred her from the winning Anabaa mare Farnesina, a half-sister to King's Stand Stakes scorer Chineur.

FIRST PUBLISHED 2:22PM, FEB 10 2017
Paul Messara and I called in on Robert Cowell during our recent visit to the UK