Daughter of Walk In The Park was foaled in May 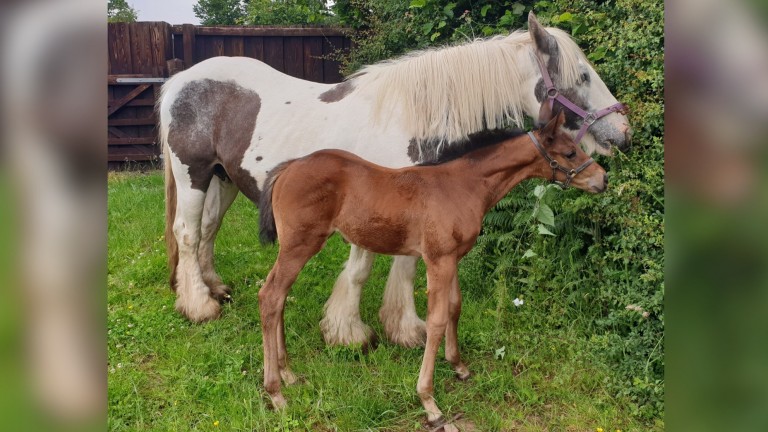 Airlie Beach's filly foal nibbling at a hedge with 'Mother' at home in Chepstow
Treasa O'Keeffe
1 of 1
By Ollie O'Donoghue UPDATED 4:14PM, JUN 23 2019

'Steph' - Airlie Beach's month-old filly by Walk In The Park - is bonding well with her foster mare after her Grade 1-winning dam died at the age of nine this week, three days after being covered by Kayf Tara.

The piebald foster mare 'Mother' was offered at short notice by Pat Cross in County Limerick and was shipped to Brook Farm in Chepstow on the first available ferry by Martin Keating Transport in County Wexford.

"Steph is doing well," said Treasa O'Keeffe, whose partner Rowland Crellin was breeding from Airlie Beach. "And thanks to an outstanding effort by Pat Cross and Martin Keating, Mother reached Steph within 18 hours of Airlie's passing.

"Also, a special thanks to the outstanding effort made by the team at Langford Equine Hospital, who worked so hard to try and save Airlie. Unfortunately, despite every effort, it wasn't to be the happy ending we all so desperately wanted."

Airlie Beach, whose son Accidental was also fatally injured at Kilbeggan on Monday, also had a Mount Nelson yearling colt bred by Crellin.

Devastated to hear the passing of AIRLIE BEACH ,she gave our owners some super days inc the royal bond @Fairyhouse our first grade 1 win ,she will never be forgotten.a lovely picture with her latest foal called Steph after @stephsearle90 who took great care of her everyday. pic.twitter.com/qP2lm5CWVU

FIRST PUBLISHED 4:09PM, JUN 23 2019
thanks to an outstanding effort by Pat Cross and Martin Keating, Mother reached Steph within 18 hours of Airlie's passing