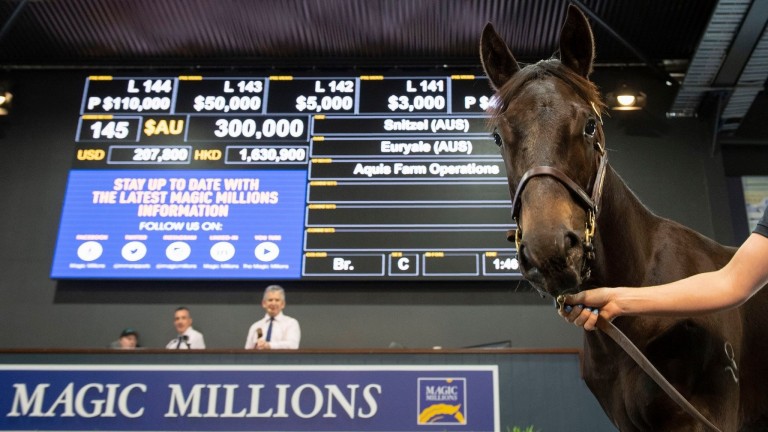 The Snitzel colt out of Listed-winning Lonhro mare Euryale who shared top billing
Magic Millions
1 of 1
By Tim Rowe and Lydia Symonds of ANZ Bloodstock News 4:18PM, MAY 22 2019

Colts by Arrowfield Stud barnmates Snitzel and Not A Single Doubt - both stallion sons of the late Redoute's Choice - shared top billing on day one of the Magic Millions Gold Coast Weanling Sale on Wednesday.

The strong top end to the market also saw Aquis Farm rewarded for its decision to offer all foals by non-resident stallions as weanlings at both Magic Millions and Inglis sales this year.

New Zealand agent Willetts purchased the colt on behalf of a client and while it is probable the horse would go back through a sales ring next year he did not rule out retaining the horse to race.

"Snitzel's service fee is A$220,000, so we've bought a nice colt for a little bit more than his service fee," said Willetts.

"He's lovely and correct and I thought he was a lovely combination of his sire and his dam, with the Snitzel athleticism and the Lonhro colouring and quality."

Catalogued as lot 145, the colt is out of the Listed-winning Lonhro (mare Euryale, who is herself a half-sister to Group 3 winner Athena Lass, by Snitzel.

The colt's third dam is the Danzero mare Danglissa, whose six wins include the Group 1 Flight Stakes.

Danglissa produced Maglissa, a duaghter of Magnus who in turn produced Magic Millions 2YO Classic winner Unite And Conquer and Redeeming Lass, the Red Ransom dam of Group 3 winner Sweet Redemption, by Snitzel.

Willetts is thorough in his pre-sale work and inspects every horse on the complex.

"It's been a real challenge to get through the catalogue as I see every horse, so it's just a matter of getting around and seeing them all, doing your homework and then hopefully being able to buy them," he said.

The leading vendor on day one, Aquis Farm sold 21 weanlings yesterday for A$1,482,000 at an average of A$70,571, figures the operation's bloodstock manager Aaron Bott believes reaffirms the move to offer all horses by non-resident stallions as weanlings.

"We brought a nice solid draft and they were here for genuine sale and that was reflected in the result," said Bott.

"It was a great achievement and we wish the purchasers every success with them."

On the Snitzel colt, Bott said: "There was a great demand for the colt. The Kulanis, who are great judges, were underbidders and there were a few more out the back, so we're very pleased with the result."

Not A Single Doubt about stallion's appeal

The progeny of the consistent Not A Single Doubt were sought after on day one, with James Bester going to A$300,000 for a Cornerstone Stud-consigned weanling soon after successful pinhookers Ampulla Lodge landed a colt by the stallion for A$280,000.

Merricks Station and Mathew Becker of Group 1 Bloodstock also struck for a Not A Single Doubt colt late in the day, going to A$250,000 for the Blue Gum Farm-consigned weanling.

The equal session-high of A$300,000 provided Cornerstone Stud's client with a good return after principal Sam Hayes and agent Mark Pilkington bought his mother Celebrity Appeal (One Cool Cat) carrying the foal at last year's Magic Millions National Broodmare Sale for A$210,000. 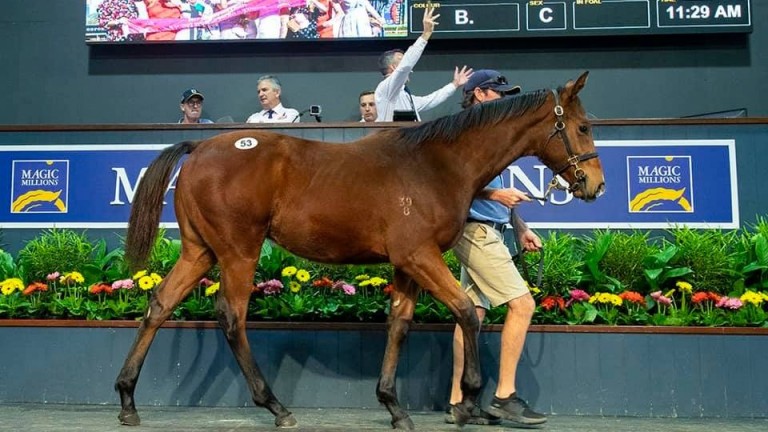 "It's a good outcome and we were really lucky that we got a really nice colt and we thought it would have been a win to get a bit of her money back, so to get it all plus a bit was outstanding," said Hayes.

The equal highest-priced foal sold by Cornerstone Stud, Hayes admitted to growing anticipation of a windfall as the popularity of the colt became apparent.

"By the time we had done a day or two of inspections we realised that he was going to be very popular and once the vet reports started coming in and we saw the hits on x-rays it was clear that he was on a lot of lists," he said.

"We were nervously excited about what he might bring. We bought the mare in foal to Not A Single Doubt for a client with Mark Pilkington, so she owns 100 per cent and we are very happy for her."

The colt is a half-brother to two winners while his dam, who is in foal to Caravaggio, is a half-sister to Group 3-winning stallion Walking Or Dancing and Listed winner Irongail, who produced the Champagne Stakes runner-up Aim For Gold.

Catalogued as lot 53, Bester said the colt had stood out as "having a little bit more size and scope than your average Not A Single Doubt".

"Obviously, he's by a very good and very popular stallion," continued Bester. "He was an extraordinary walker with a good action with scope and strength.

"Overall, he's an outstanding individual with a very good pedigree behind him and he's already a half-brother to a Hong Kong winner in Coolceleb. We just feel there is scope for upside in the yearling sale ring."

Earlier in the session, Steve and Ceri Jostlear of Ampulla Lodge earmarked the 'value' Not A Single Doubt colt as an ideal pinhook candidate.

"He's a nice colt and we thought we'd get in early because I reckon there's another colt coming up [lot 53] who will make more than him and I thought he was good value at A$280,000," said Jostlear.

"He's a nice moving colt and has everything going for him. Not A Single Doubt has been a proven horse for a long time, so he fits the bill for us."

The colt is the sixth foal out of the stakes-winning mare Cariad, who is the dam of three winners. Catalogued as lot 44, the colt is likely to return to the Gold Coast for the Magic Millions Yearling Sale in January.