National Stakes scorer Verbal Dexterity will be offered on Wednesday 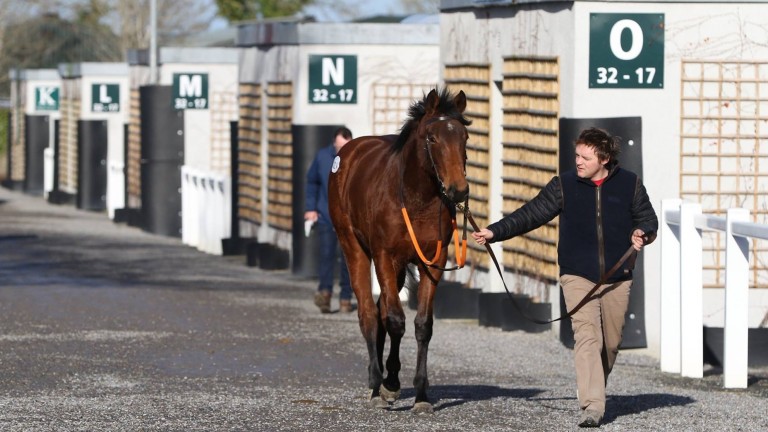 Verbal Dexterity, who was sent out by Jim Bolger to win the 2017 National Stakes at the Curragh, is one of two stallion prospects listed for the Goffs February Sale, which takes place on Tuesday and Wednesday from 10am each day.

Bred by Bolger and John Corcoran, the five-year-old is by the Vinndication stallion Vocalised - a $560,000 yearling campaigned by Bolger and Corcoran - out of the Holy Roman Emperor mare Lonrach.

Ridden throughout his career by Kevin Manning, Verbal Dexterity (lot 545) won by almost ten lengths on his debut in a hotly contested Curragh maiden, before posting his highest Racing Post Rating of 119 in the National Stakes.

Verbal Dexterity continued to perform admirably at three and four, including when second to Hazapour in the Group 3 Amethyst Stakes at Leopardstown on his penultimate start.

He will be offered by Glebe House Stables along with the unraced stallion prospect News Anchor (546), a New Approach colt whose dam Halla Na Saoire is an unraced Teofilo half-sister to the Group 2 winner and Irish Derby third Light Heavy and Halla Siamsa, the dam of Dewhurst Stakes scorer Parish Hall.

Among the broodmares on offer are Dawn Of A New Era (438), a sister to Dawn Approach offered in foal to Make Believe, and Olga Prekrasa (480), the dam of Group 1 Prix Jean Prat scorer and sire Zelzal who is in foal to Churchill.

Some of the weanlings on offer will pique the interest of National Hunt buyers, including Thistletown Stud's Mount Nelson half-sister to the dual Irish Grand National runner-up Isleofhopendreams (59); and Cleaboy Stud and Coppice Farm's Getaway half-sister to the Grade 2 hurdle winner My Sister Sarah (214).

Billed as Europe's leading mid-winter sale, the February Sale begins with a full day of weanlings on Tuesday, followed by a day dedicated to breeding stock, two-year-olds, horses in training and older horses, as well as the two stallion prospects.

Goffs chief executive Henry Beeby said: "As the most consistently successful mid-winter sale in Ireland and the UK, we are delighted to offer the largest and most diverse selection of horses anywhere in Europe at the beginning of the year.

"The popularity of the Goffs February Sale was evident by the demand for places again this year and we have produced a catalogue of unrivalled choice and quality that should hold huge appeal to domestic and international buyers."

When Tuesday and Wednesday, sessions start at 10am

FIRST PUBLISHED 11:33AM, FEB 3 2020
Among the broodmares on offer are Dawn Of A New Era, a sister to Dawn Approach offered in foal to Make Believe