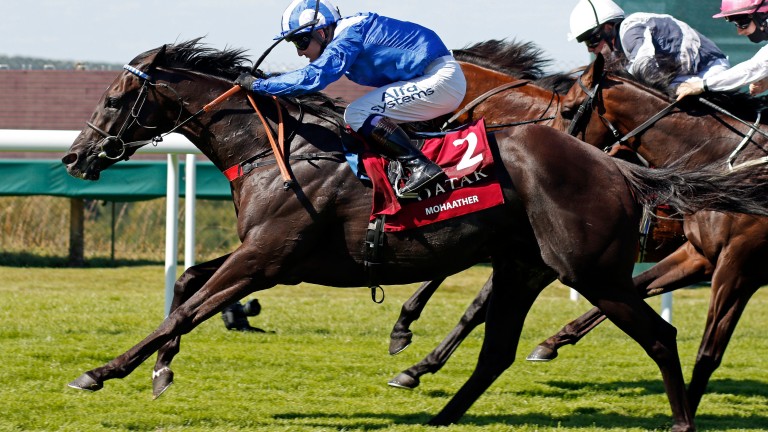 "We are keen to support breeders through these challenging times for the bloodstock industry caused by the Covid-19 pandemic, and we believe that Mohaather’s introductory fee of £20,000 represents excellent value," said Shadwell stud director Richard Lancaster.

"He's a striking dark bay, with plenty of quality and incredibly light on his feet. However, what really impresses me is how well he walks. He's a superb mover, who covers an incredible amount of ground. If he can pass that walk on to his stock, breeders will be sitting pretty."

Lancaster added: "We have also trimmed the prices for Muhaarar, Eqtidaar and Tasleet in light of the present economic situation. Muhaarar has supplied several exciting winners, while Eqtidaar proved popular in his first season at stud, and Tasleet's foals have sold very well, which is most encouraging."

Mohaather won five races in the colours of Hamdan Al Maktoum while under the care of Marcus Tregoning. He was an impressive winner of the Group 3 Horris Hill Stakes at two and returned at three to land the Greenham Stakes, showing his trademark high cruising speed and electric turn of foot to see off the likes of Great Scot and subsequent Group 1-winning sprinter Hello Youmzain.

The stunning Mohaather, a sensational winner of this year’s Sussex Stakes, cuts a dash at Beech House. The Group 1-winning son of Showcasing joins Shadwell’s Nunnery Stud roster in 2021 pic.twitter.com/8OWDU37PNw

He produced not only a career-best, but arguably one of the most impressive performances of the year, when overcoming trouble in running to defeat a high-class field, including Circus Maximus, Kameko and Siskin, in the Group 1 Sussex Stakes.

Bred by Gaie Johnson Houghton, the son of Showcasing hails from a notably active family. He is out of the Listed-placed Roodeye, making him a brother to the dual Grade 2 winner Prize Exhibit, whose Galileo filly sold for 2,800,000gns at this year's Book 1 of the Tattersalls October Yearling Sale.

His dam also produced Roodle, a dual winning daughter of Xaar who is best known as the dam of Group 1 Queen Anne Stakes hero Accidental Agent.

The second most expensive member of the Nunnery Stud roster is Muhaarar, whose fee has been trimmed into £10,000. The exceptional sprinter has been represented by the likes of Group 3 Prix de Lutece scorer Paix this season, while he has supplied 18 European two-year-old winners, including Horris Hill Stakes victor Mujbar and Baradar, who was last seen finishing third in the Group 1 Vertem Futurity Trophy.

Mohaather and Muhaarar are joined by the classy Tasleet, whose first foals fetched up to 60,000gns and averaged close to three and a half times the fees at which they were bred at the Tattersalls December Sale.

The son of Showcasing, who won stakes races at two, three and four, has had his fee clipped into £5,000 for his third season on stallion duty.

Completing the line-up is Commonwealth Cup hero Eqtidaar. The imposing son of rising sire of sires Invincible Spirit is a half-brother to the talented pair Massaat and Mujbar.

Mohaather, along with the other Shadwell stallions, is available to view at the Nunnery Stud.

FIRST PUBLISHED 8:01PM, DEC 3 2020
We are keen to support breeders through these challenging times for the bloodstock industry caused by the Covid-19 pandemic