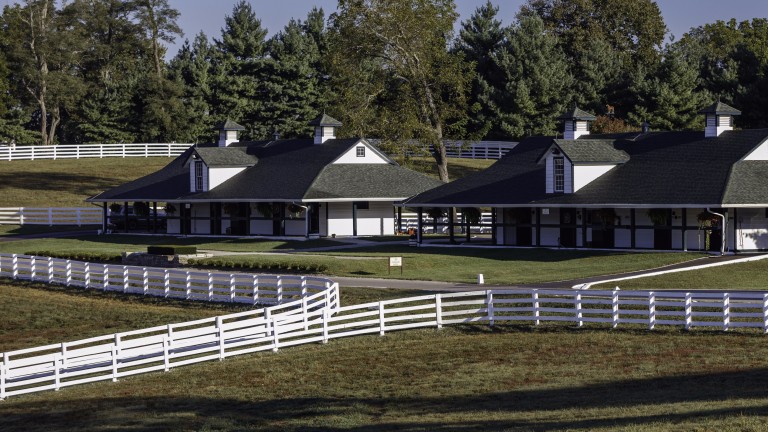 Darby Dan: the home of 12 stallions
SHANDON CUNDIFF LIGHTSHAPE
1 of 1
By Eric Mitchell of Bloodhorse UPDATED 10:51AM, DEC 7 2021

Dialed In, the leading sire of his freshman class and still at the top of his class this year, tops Darby Dan Farm's stallion roster for 2022 at $15,000, the same fee he carried earlier this year.

The 12 stallions standing at Darby Dan also include new sire and multiple Graded winner Modernist, leading third-crop sire Tapiture and Grade 1 winner Higher Power, whose first foals arrive next year. Those three will each stand for $10,000.

Dialed In, a 13-year-old son of Mineshaft, is among the top five leading North American sires this year by number of three-year-olds winners (55) and by earnings from three-year-olds ($4,406,294).

His top runners of 2021 include nine black-type performing sophomores and five Graded horses led by Super Stock, who won the Arkansas Derby and the Runhappy Ellis Park Derby. Dialed In also sired Mr Wireless, who won the Indiana Derby and the West Virginia Derby.

Tapiture, a ten-year-old son of Tapit, is the leading third-crop sire by number of winners with 115 and the fourth-leading sire of his class by progeny earnings at more than $6 million.

Tapiture also is the second-leading North American sire by number of three-year-olds winners, putting him just behind Into Mischief. Among his top runners this year are Iowa Breeders' Derby winner You Talkin to Me and the Grade 1-placed Jesus' Team, who was second in the Pegasus World Cup Invitational Stakes in January to top handicap division runner Knicks Go.

Higher Power, a son of Medaglia d'Oro, was an easy winner of the 2019 Pacific Classic Stakes at Del Mar, where he defeated a field made up entirely of Graded winners, including three  North American Grade 1 winners. Higher Power also placed in the Longines Breeders' Cup Classic, Hollywood Gold Cup, and Awesome Again Stakes.

Modernist is a multiple Graded winner by leading sire Uncle Mo and out of the Bernardini mare Symbolic Gesture, a half sister to champion two-year-old filly Sweet Catomine and 2009 Breeders' Cup Ladies Classic winner Life Is Sweet.

He will stand for a partnership between the farm and Matt Bowling of Bowling Bloodstock. Modernist won the 2020 Risen Star Stakes at Fair Grounds & Slots and the Excelsior Stakes at Aqueduct for owner/breeders Marty and Pam Wygod and trainer Bill Mott. He has a 3-2-2 record from 11 starts and earned $576,300.

Darby Dan will once again be offering various incentive programmes in 2022 to provide value to breeders, including Profit Protection, Share the Upside, Black-Type Bonanza, and Goldmine 20/20 Match Programme.

FIRST PUBLISHED 10:51AM, DEC 7 2021
Modernist is a multiple Graded winner by leading sire Uncle Mo and out of the Bernardini mare Symbolic Gesture