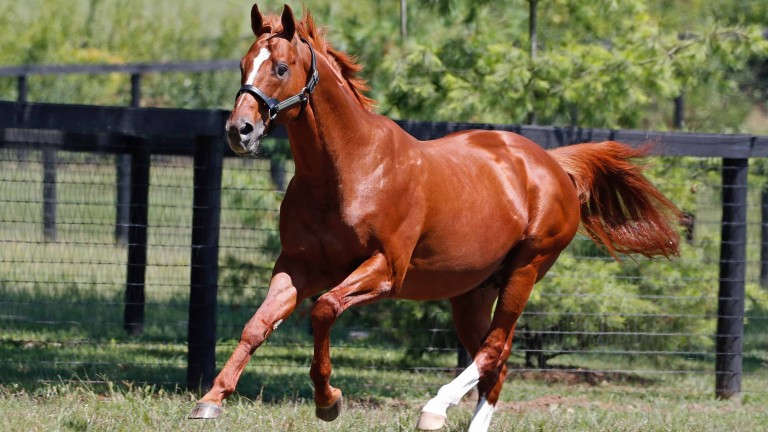 Curlin continues to be the daddy at Hill 'n' Dale after another splendid year
Michele MacDonald
1 of 1
By Eric Mitchell of Bloodhorse UPDATED 10:51AM, DEC 7 2021

Another young farm stallion who performed particularly well at auction was Grade 1 winner Army Mule, whose 44 first-crop yearlings bred on a $10,000 stud fee sold in the ring at the yearling sales went on to average $112,500.

New to the roster is Charlatan, a multiple Grade 1 winner with earnings of $4,047,200, who will take up residence at the stallion complex at Xalapa alongside the farm's 13 other stallions.

A son of Speightstown, Charlatan won a division of the Arkansas Derby and the Malibu Stakes at three and earlier this year was runner-up to Mishriff in the $20 million Saudi Cup, which will be run as a Group 1 race from next year. He begins his stud career at a fee of $50,000.

"Currently, on the BloodHorse sires list, Ghostzapper is ranked second by progeny earnings and Curlin is number three (by earnings) with the most Grade 1 winners in North America.

"Maclean's Music has enjoyed a breakout year led by Grade 1 winners Jackie's Warrior and Drain The Clock. Kitten's Joy is consistently a leading sire, and Violence has a prime Breeders' Cup contender in Dr Schivel.

"Our newest addition Charlatan is hugely popular with breeders and will be supported with our best mares."

FIRST PUBLISHED 10:51AM, DEC 7 2021
Currently, on the BloodHorse sires list, Ghostzapper is ranked second by progeny earnings and Curlin is number three, with the most Grade 1 winners