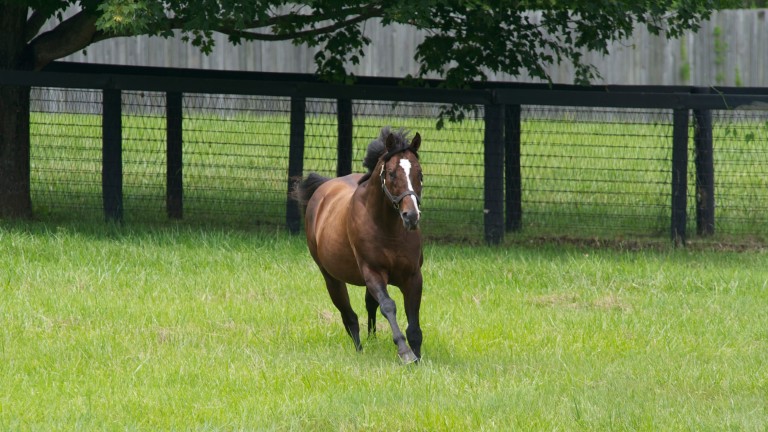 War Front in his paddock at Clairborne Farm
Claiborne Farm
1 of 1
By Eric Mitchell of Bloodhorse UPDATED 10:51AM, DEC 7 2021

Internationally acclaimed sire War Front once again heads the Claiborne Farm stallion roster with a stud fee of $100,000 for 2022.

The 19-year-old son of Danzig, who is the leading active North American sire by percentage of black-type winners from runners at 14.3 per cent, has had another strong year around the world. He has sired ten stakes winners led by Tab Australian Cup winner Homesman and four other Grade/Group 1 performers worldwide.

War Front continues, too, to be popular in the sales ring, with multiple million-dollar yearlings this year taking him to 29 seven-figure yearlings, his 2021 group led by a $1.2 million filly.

Standing alongside War Front is his dual-surface Grade 1 winner War Of Will, who won four Graded races during his career, including the Maker's Mark Mile at Keeneland on turf and the Preakness Stakes on dirt. He will stand his second year at stud in 2022 for $25,000.

Already the sire of multiple champions, Flatter is having one of his best years in 2021, with his daughter Search Results taking the Acorn Stakes after a runner-up finish in the Kentucky Oaks. He will stand next year for $35,000.

The son of A.P. Indy has sired 118 stakes performers and 58 black-type winners, with more than $80m in progeny earnings to date. This year he has sired six stakes winners and 11 stakes horses, which include Grade 2 winner Avie's Flatter and Grade 3 winner Plainsman.

Champion racehorse Blame continues to prove year after year that he's one of the best of his generation with 70 stakes performers and 37 black-type winners, which include five Grade 1 winners. A proven sire in both North America and Europe, his runners this year include French Group 3 winner and €575,000 Arqana Arc Sale purchase Saiydabad and 11 stakes performers in three countries.

Blame's yearlings continue to be in demand at auction, with 16 selling for six-figures this year and topped by a $525,000 filly at the Keeneland September Yearling Sale. He will stand for $20,000.

Catholic Boy and Demarchelier will have their first foals offered at the autumn mixed sales this year. Catholic Boy, one of only three North American three-year-old colts in history to win Grade 1s on dirt and turf, will stand for $20,000.

Demarchelier, who will stand for $5,000, has been supported by top breeders worldwide being a regally-bred Graded winner and only son of the leading European sire Dubawi standing in Kentucky.

Champion sprinter Runhappy is a top-five second-crop sire this year and will stand in 2022 for $12,500.

The sire of nine stakes performers and five black-type winners, his best include Vosburgh Stakes winner Following Sea. Runhappy has also proven to be a sire of successful two-year-olds, which accounted for three of this year's stakes winners - Runup, Happy Soul and Run To Daylight .

Undefeated as a three-year-old, Phipps homebred Performer is by emerging sire-of-sires Speightstown and from the family of champion Storm Flag Flying and Hall of Fame mare Personal Ensign.

A multiple Graded winner, Performer proved to be a talented racehorse who never finished worse than third. He won the 2019 Discovery Stakes and the Fred W. Hooper Stakes this year and was third in the Cigar Mile Handicap last year. He will stand for $12,500.

A grandson of the great Danzig through his son Hard Spun, Metropolitan Handicap winner Silver State will enter stud at Claiborne in 2022. His stud fee will be announced at a later date.

The winner of six consecutive races spanning 2020 and 2021, he has won or placed in eight stakes races in his career and earned more than $1.9m. Silver State is being aimed at this year's Breeders' Cup Dirt Mile.

FIRST PUBLISHED 10:51AM, DEC 7 2021
A grandson of the great Danzig through his son Hard Spun, Hill 'n' Dale Metropolitan Handicap winner Silver State will enter stud at Claiborne in 2022