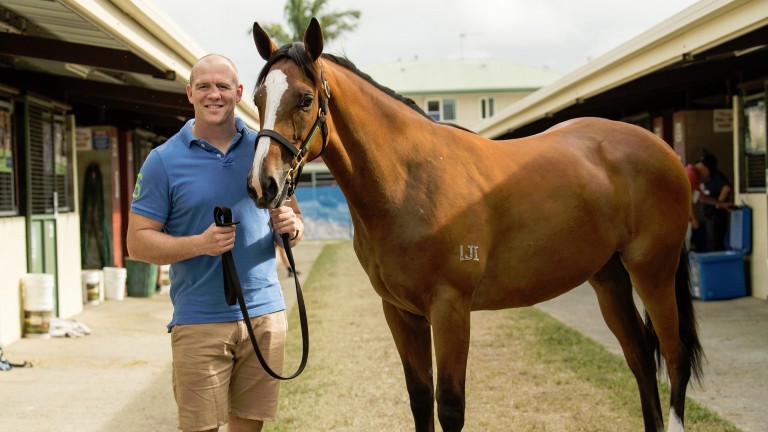 Mike Tindall is no stranger to the big stage. In 2003 he helped England secure the Rugby Union World Cup and in 2011 Tindall married Zara Phillips, the Queen’s granddaughter.

But at the upcoming Magic Millions Gold Coast Yearling Sale, Tindall is set to face a different type of pressure as his first venture into the world of pinhooking is set to be put to the test against the market.

Tindall is part of the Redwall syndicate formed by Qatar Racing’s racing manager David Redvers and his assistant Hannah Wall, who pinhooked seven weanlings from the Gold Coast Sale in late May 2016.

Despite the sunny climes and blue-blooded yearlings, Tindall took his first steps on this particular journey back at Cheltenham in January 2010.

Tindall, in what he describes as “the best thing I’ve ever done while drunk”, was at the sales on a social gathering when things took an expensive and unexpected turn.

“We were having dinner at a horse auction and I wanted to get involved,” he explains. “So I stuck my hand up just so I could have a bid on a horse, and I ended up getting stuck with it! I had a whip-round with my mates and managed to get two other rugby players – James Simpson-Daniel and Nicky Robinson – involved and then Michael Scudamore joined in and they all took a leg.”

A drunken mistake it may have been, but the five-year-old son of Witness Box who Tindall signed for was Monbeg Dude, who became a talented staying chaser and was recently retired with four victories under rules to his name, including two Grade 3s at Cheltenham.

And under an inspired Paul Carberry ride, he overcame countless blunders to beat Teaforthree by a gritty half- length in the 2013 Welsh Grand National.

He retired with earnings of £261,997, which gave Tindall the ammunition to change tack from a fine staying chaser trained in Herefordshire to a group of precocious yearlings who have been reared in the verdant pastures of the Widden Valley, New South Wales.

“We reinvested the money we won with Monbeg Dude,” Tindall explains. “Hannah Wall and David Redvers set up the syndicate, they’d seen an opportunity to invest down here. We had a look at it and thought it was an interesting prospect so we took the plunge.”

The link between Tindall and Redvers was established when the centre was plying his own fearsome brand of rugby at Gloucester.

“I’ve known David for a long time as Tweenhills is right next to our training ground,” Tindall says.

“Hannah’s very good at giving us reports and we got very excited when we heard about Pierro having his first winner on New Year’s Eve,” Tindall says of his initial experiences as a pinhooker.

“Hannah and David trust what they’ve bought and we’ve put our trust in them. I’m one of those people who will try to read as much as I can and retain it, but the stallion book is just crazy. You know the big names you want in a pedigree though and we’ve got good horses in the breeding of these yearlings so hopefully they’ll do their job.”

Tindall has drawn more than his fair share of attention while on the Gold Coast, primarily as the spouse of the Queen’s granddaughter, and it is her role as a Magic Millions ambassador, and the carnival atmosphere the sales company generates, that has helped sway him towards investing in Australian bloodstock.

“It’s great for me as I knew we’d always be down here with our Magic Millions connection,” he says. “I didn’t get to visit the sales last year so Wednesday will be interesting. It’s definitely made it a bit more exciting. We love going to the races but this is a different side of the industry.

“When you look at how Magic Millions has changed in the last five years, it’s such a massive event and I think more and more is going to come from the Australian side of things. They look after you so well here it makes you want to come back. It seems like whatever Katie [Page-Harvey, Magic Millions owner] sets her mind to she can achieve.”

Tindall also revealed that the returns the syndicate make on the yearlings may not be the only bottom line profit he will be leaving the Gold Coast with.

“I’m actually playing golf with Gerry [Harvey - Magic Millions owner] on Tuesday, hopefully I’ll take some money off him, that would make the trip even better!”

Despite his success with Monbeg Dude and his optimism for the yearling draft, Tindall says he is acutely aware he still has plenty to learn about the world of bloodstock.

“It’s very complicated and I’d like to say I know a lot about it but when I read the stallion books I just get confused,” he says, before adding that when it comes to inspections he is happy to let others make the judgement calls.

Another of Tindall’s bloodstock ventures may well have had a better outcome for his Olympic medal-winning, event-riding other half than it did himself.

“We tried to buy a point-to-pointer who we could sell on but the horse had a wind problem and is now an event horse. We’ve talked about owning another horse but we got very lucky with Monbeg Dude. I’d actually like to go in on a Flat horse at some point.

“If I had to nail my loyalties it would always be to the jumps, but there is something about understanding the Flat and breeding that appeals.”

For now Tindall seems content to continue pinhooking foals for the Australian market through Redwall.

Tindall reveals Monbeg Dude is to retire to the paddocks at his home, where he will have equally illustrious equine company in Toytown, who his wife rode to gold medal glory at the 2005 European Eventing Championships and FEI World Equestrian Games in Aachen the following year.

“Toytown doesn’t actually spend that much time in the field as he gets bored very easily and jumps out,” joked Tindall.

If his beginner’s luck with staying chasers can be replicated in the sales ring today, the journey back to Britain’s frosty climate will feel just that bit shorter.

FIRST PUBLISHED 7:13PM, JAN 10 2017
We had a look at it and thought it was an interesting prospect so we took the plunge